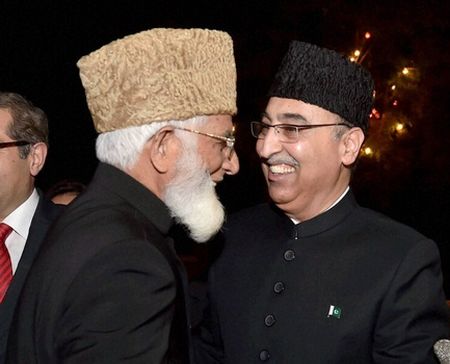 'The Modi government has turned the basic fundamentals of its Pakistan policy on its head.'
'It means an admission that its hands-off-Hurriyat policy was flawed and it is ready to engage with Pakistan without minding if the Kashmiri separatists spoke to the Pakistani government,' says Rajeev Sharma.

The Narendra Modi government's Pakistan policy is much like the Russian Matryoshka doll, a set of multiple wooden dolls of decreasing sizes that all fit inside of each other, one by one, each splitting in half at the mid section and opens to reveal another smaller doll nested within till you reach the smallest one with nothing nested in it.

The Matryoshka doll analogy is apt to describe the latest U-turn made by the Indian government in context of Kashmiri separatists which had triggered the first setback for the short lived India-Pakistan bonhomie in August 2014. At that time, the government had unilaterally cancelled the foreign secretary-level talks days before these were to take place in Islamabad.

The sole reason for the Modi government's hard stand was that the Pakistani envoy in New Delhi had met Hurriyat leaders. Its one-line blunt message to Islamabad was that either you talk to them or to us.

This was seen as the new Modi-Doval (National Security Advisor Ajit Doval) doctrine and suddenly India had a new template for holding peace talks with Pakistan. The architects of this new template were Modi and his high profile NSA.

Last week on April 28, this template was blown into smithereens by Minister of State for External Affairs V K Singh and that too in a written reply to an unstarred question in Parliament. This is how General Singh, a retired army chief, responded to a question from All India Anna Dravida Munnetra Kazhagam's Rajya Sabha member Paul Manoj Pandian: 'Since the entire state of Jammu and Kashmir is an integral part of the Union of India and these so-called Kashmiri "leaders" are Indian citizens, there is no bar on their meetings with representatives of any country in India.'

'However, India has consistently maintained that there is no role for a third party in the bilateral dialogue between India and Pakistan as per the Shimla Agreement and the Lahore Declaration. India's displeasure at Pakistan's attempts to interfere in India's internal affairs has been repeatedly conveyed to Pakistan.'

Clearly, the most important part of the minister's statement was this one single sentence: 'Since the entire state of Jammu and Kashmir is an integral part of the Union of India and these so-called Kashmiri "leaders" are Indian citizens, there is no bar on their meetings with representatives of any country in India.'

With this, the Modi government has turned the basic fundamentals of its own Pakistan policy on their head. It means an admission that its hands-off-Hurriyat policy was flawed and it is ready to engage with Pakistan without minding if the Kashmiri separatists continued to talk to the Pakistani government like they used to do during the United Progressive Alliance rule and even during the previous National Democratic Alliance government led by Atal Bihari Vajpayee.

This can be interpreted in only two ways, both contradictory to one another. One, the Modi government is large-hearted as well as broad-minded to recognise its mistake and was willing to make amends.

It is a typical half-glass-full or half-glass-empty kind of a scenario and it is up to the beholder how s/he judges the Modi government's Pakistan policy -- whether as a visionary policy or as a complete disaster.

It will be difficult for the Modi government to convince even its best friends and well-wishers that the latest policy from the government's stables is a visionary step and not a fool's midsummer night dream.

After all, the Modi government is back to square one. Either it was right when it adopted a 'talk to them or us' policy or it is right now. It can't be right on both occasions!

This brings us back to the Matryoshka doll analogy. The doll has fascinated and intrigued people from different cultures for long. It is also looked at as a metaphysical symbol, a symbol of fertility and a celebration of womanhood and motherhood.

But a Matryoshka doll is also like the peeling of an onion. You go on peeling an onion till nothing is left.

Isn't the Modi government's latest U-turn on the Hurriyat issue like the peeling of an onion? You go on peeling till nothing remains.