Will a time come when people will look beyond what they see as Modi's strengths and begin to wonder why they have got poorer or sicker under his rule, asks Vir Sanghvi. 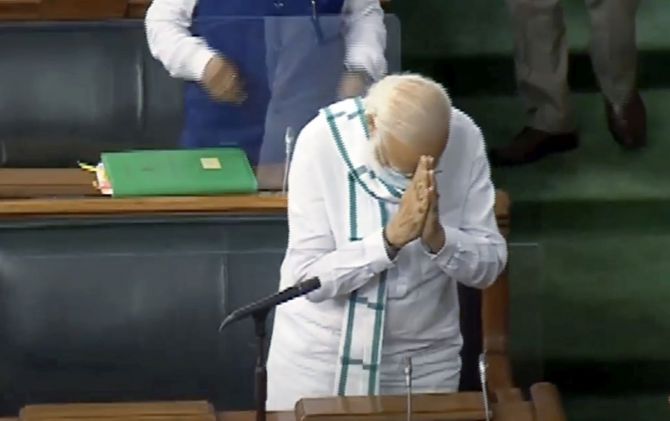 It is a question that seems to baffle everyone who writes about Indian politics. Why is it that no matter how bad things get, Narendra Modi just seems to get more and more popular?

At no time in the last three decades has India been in worse shape than it is now.

The contraction in the economy has been so severe that we can kiss goodbye to all those hopes and dreams about the Indian growth success story.

Around 21 million salaried jobs have disappeared.

According to the government's own estimates, around 10 million migrant labourers made the painful and difficult journey home once the lockdown was imposed.

And as severe and sudden as the lockdown was, it seems to have had no lasting beneficial impact.

Covid cases continue to rise and we now have the second highest number of cases in the world.

The relationship with China, once a cornerstone of this government's foreign policy, has collapsed and there have been violent clashes on the border.

So why is the prime minister still so popular?

Could it be that he is just a more skillful populist than his counterparts elsewhere in the world?

I am sure that is part of the reason but there are others as well.

One of them is the nature of Modi's appeal to his core constituency. They like him not for the things he does (or does not do) but for what he is and for what he represents.

But Indira Gandhi had nothing like Modi's enduring appeal.

In 1971/1972, after winning the Bangladesh war, she was one of the world's most popular leaders.

But in just two years, all that had collapsed, as inflation and scarcity rocked the Indian economy.

By 1975, she was forced to declare an Emergency to remain in office.

Mrs Gandhi had won power by promising to do things. ('Garibi Hatao' was her slogan.) When she could not deliver on those promises, public anger against her mounted and her mandate vanished.

In Mrs Gandhi's day there was a broad consensus about the kind of nation we were: The primary point of difference between her and the Congress Syndicate she overthrew was framed only in terms of economic policies.

But Modi has been able to draw a more significant distinction between the India he inherited and the one he represents.

He does not bother (as, say, Atal Bihari Vajpayee did) to pay lip service to secularism, insaniyaat or raj dharma where there is no discrimination on the basis of religion. (Follow raj dharma is the advice Vajpayee gave Modi after the Gujarat riots.)

His vision of India is a Ram Rajya that the kar sevaks in Ayodhya would be proud of.

I spoke to Dhananjai Joshi, director of the opinion research agency Cicero. Joshi's recent research on the ruling establishment's core support reveals that it consists of conservative Indians, overwhelmingly Hindu, who have little patience with what we might call modern, liberal values and a deep concern with national security.

This is the Modi constituency: People who value strength, 'Indian values' and sincerity more than they care about performance.

According to Sanjay Kumar, head of the Centre for the Study of Developing Societies, all his recent research suggests that the prime minister's approval rating is over 70 per cent.

Modi is admired for his sincerity and decisiveness. His admirers say he imposed a strict lockdown before many other countries did proving that he was doing his best to protect India. Even if Covid has not been brought under control, at least the prime minister tried his best.

Modi’s supporters don’t always have all of the facts. Many of them, says Kumar, believe that India has fared better than other countries in the fight against Covid and give the prime minister the credit.

And indeed, the role of social and electronic media has been to prop up counterfactual narratives while discouraging any awkward questions.

Anyone who asked questions about those incidents (was there an intelligence failure at Pulwama and did we hit the right targets in Balakot?) was shouted down as being unpatriotic.

When it is impossible to deliver alternative facts (on the state of the economy, for example), the issue itself is played down and distractions that appeal to Modi's core constituency are preferred.

Hence, the recent campaign to portray Bollywood as a den of nepotistic and incestuous drug-fuelled vice, a characterisation that confirms the worst prejudices of the BJP's conservative core constituency.

Will this core constituency stay loyal through the terrible times that India is going through?

Kumar says that the evidence suggests that it will.

Joshi says that at the last election when people were polled about economic failures and demonetisation, even those who conceded that there were reverses felt no anger towards the government and voted for the BJP anyway.

A large part of the problem is the absence of an alternative.

Such is the legacy of the inept United Progressive Alliance II, says Kumar, that voters do not believe that the UPA would have done a better job.

Nor do they regard a Congress run by Rahul Gandhi as being any kind of alternative to Modi.

In the end, it comes down to Modi personally.

All pollsters are agreed that he is far more popular than his party. (This could be why the BJP does so much better in Lok Sabha elections than it does in assembly polls.)

He has convinced large sections of the electorate that not only is he sincere and honest but that only he can run India.

People who wonder why the BJP tries to topple every Opposition-run state government miss the obvious answer: It reinforces the narrative that only the BJP knows how to run governments.

All populists, no matter how skilled, usually face a reckoning.

Will a time come when people will look beyond what they see as Modi's strengths and begin to wonder why they have got poorer or sicker under his rule?

Will they cease to vote for the BJP only because it represents a vision of a new India that they subscribe to and start demanding performance?

Logic suggests that it will happen one day. But, so far, at least, that day seems far away.