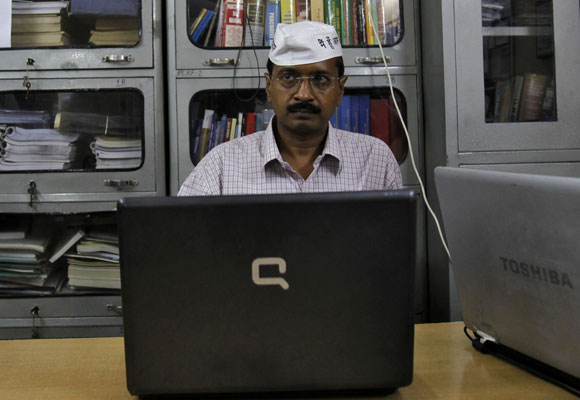 Twitter is a great medium for political leaders to communicate with their supporters and engage with their opponents.
Provided the tweets are coherent and sensible.
So why is the Delhi chief minister tweeting illogical stuff about the PM, asks Sudhir Bisht.

Many a leader has been making great use of Twitter to reach out to supporters and constituents. Prime Minister Narendra Modi has been tweeting with much enthusiasm, so much so that his critics have stopped pointing at what he tweets, but instead focus on what Modi misses to tweet.

Ideally, one thought Kejriwal would attack the PM with facts and figures, but his tweets were devoid of logic.

Dear @narendramodi ji,2 years ago, u promised that Team India shall not be limited to PM but include CMs. Now u conspire to destabilize CMs

I am really stumped the Delhi CM is talking about Team India led by the PM! Everyone knows that Kejriwal has been attacking Modi on a personal level with unending vigour. Sometimes his cronies call him a Pakistan sympathiser and as if it isn't enough, his party rakes up the issue of the PM's degree.

A CM who can't appreciate even ideological opposition to his diktats expects team spirit from the man he harasses the most! Irony, or lack of logic?

Now coming down to facts, Mr Kejriwal needs to know that there were attempts to destabilise two state governments recently. One was successful and the other was not.

In Arunachal Pradesh, there was a near 50:50 split in the Congress party that led to the formation of a new government. And the government formation by Congress rebels and the Bharatiya Janata Party has been approved by Supreme Court itself.

In Uttarakhand, the Harish Rawat-led government had technically fallen when nine MLAs belonging to the Congress party voted against the state budget which Speaker Kunjwal declared as having been passed by a voice vote. A conscientious CM would have resigned then and there.

But expecting such morally correct actions from anyone in today's times is a pipedream. And Rawat is a mortal like the rest of us.

So why is Mr Kejriwal batting for the Congress party?

Is he lamenting the legitimate attempts by the Opposition to dislodge the unpopular Nabam Tuki government in Arunachal?

Is he happy that the CM of Uttaranchal survived in spite of seeming to be the central figure in the bribe-and-survive kind of politics?

Is Kejriwal supportive of a CM who says he will not interfere if his ministers enrich themselves at the exchequer's expense?

The second tweet by Delhi CM to the PM was:

Dear @narendramodi ji, 2 years ago, you promised new courts & doubling number of judges but even tears of the CJI haven't made you act

I am surprised the Delhi CM is appreciative of the Chief Justice's public display of emotions. I thought for the revered head of the Supreme Court of India, an independent and solid pillar of democracy, shedding tears doesn't exactly build the confidence of a nation.

The judiciary, which is able to upturn or reverse many administrative and even legislative decisions, can surely argue its own case for a better, more robust, infrastructure for itself.

(By the way, the law minister has already made a statement that the judiciary's demand for so many more judges isn't backed by the numbers.)

Kejriwal calls Rohit Vemula's suicide a case of institutional murder. What does he really want to convey?

How is the promise to education for Dalits related to the unfortunate loss of a brilliant life?

Is education for Dalits and Rohit's death 'either-or' events? Or they are mutually related?

What exactly does the tweet say I haven't been able to fathom. And what is meant by Modi's silence?

Had he not expressed his sympathy and condolences to the victim's family? Does it end with that? Or maybe this tweet was one for the sake of a tweet?

There are many more such tweets, but just look at this one:

Does Kejriwal know this is the first time a government has shown the guts to tell the people of India the rot that ails PSU banks?

Is it not the first government that is setting up a specialised body to help PSU banks deal with NPAs?

How else can NPAs be reduced if not by admitting the problem and then setting up a body with a mandate to solve the problem?

What is the direct link between NPA reduction and Mallya fleeing India? And how exactly did Modi 'allow' Mallya to flee?

Dear @narendramodi ji 2 years ago u promised corruption-free governance but are silent (like Manmohan ji) on Vyapam, Lalitgate, mallya, khadse

Can Kejriwal deny that the Modi government is corruption-free? So far, at least. And if there are instances of corruption, he should specify.

The Khadse controversy erupted a few days ago and the Delhi CM should allow some time to see how the Maharashtra CM proceeds in the case.

Do I need to say anything? He, the Delhi CM, is holding the PM responsible for the behaviour of the people the PM follows on Twitter!

Is this a joke or I am missing something?

So if Veerappan was alive and following @ArvindKejriwal, the Delhi CM would be responsible for the brigand's conduct?

For some strange reason Arvind didn't tag @narendramodi with this tweet.

Twitter is a great medium for political leaders to communicate with their supporters and engage with their opponents. Provided the tweets are coherent and sensible.

My advice to the Delhi CM is, being at loggerheads with leaders will not help you succeed as CM. Maybe you should learn from Harish Rawat who, in spite of all his travails and for which he may himself have been responsible, has only sent out conciliatory signals to the Centre.

I hope Kejriwal reads this. After all, I voted him into office twice.