This must be the first time in India's history that it has found itself bracketed with countries in a category which political scientists will not rate very highly if only because the group recalls Nazi Germany as one of its most infamous past members, notes Amulya Ganguli.
Illustration: Uttam Ghosh/Rediff.com 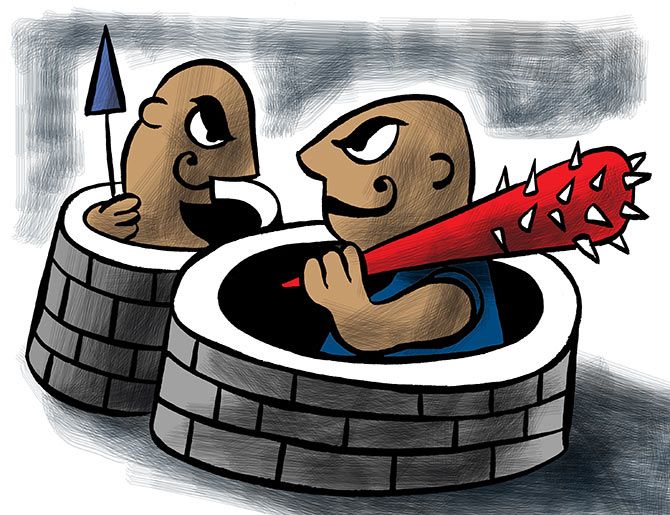 The BJP's supporters are likely to draw uneasy, ambivalent, satisfaction from India being listed as one of the fascistic countries in today's world by a Yale professor, Jason Stanley, in his book, How Fascism Works: The Politics of Us and Them.

His list includes the US, Russia, Hungary, Poland, India and Turkey.

This must be the first time in India's history that it has found itself bracketed with countries in a category which political scientists will not rate very highly if only because the group recalls Nazi Germany as one of its most infamous past members.

If India has not featured in a catalogue of this nature until now, the reason is that its history has been vastly different from that of, say, the US where ethnic extremism has long been prevalent.

For instance, as Stanley says, a parallel can be drawn between Donald Trump's 'America First' slogan and the hero of aviation, Charles Lindbergh's white supremacism which made him say in 1939 that 'it is time... to build our white ramparts... to guard our heritage from Mongol and Persian and Moor'.

This was another America First movement whose motivation was opposing the entry of the US into the war against Nazi Germany.

As is known, India's heritage is completely different as it draws its inspiration from the pluralist tenets of the Emperors Asoka and Akbar as well as Mahatma Gandhi.

However, it would be a mistake to deny that right-wing extremism was non-existent in India, for it struck roots way back in 1925 when the RSS was founded.

However, it remained dormant because of the towering presence of Gandhi and Jawaharlal Nehru.

But if the roots have begun to yield their poisonous fruit nine decades later, the explanatons lie in a political rather than a social context.

If the standard-bearer of Nehru's secularism, the 134-year-old Congress party, did not commit several blunders, right-wing extremism would still have been kept in check.

For the present, it will be instructive to enumerate the factors that are associated with the rise of the far right.

As Stanley has noted, these include a mythic past, anti-intellectualism, the concept of victimhood, sexual anxiety and appeals to the heartland.

All of these can be discerned in the politics and propaganda of the RSS and the BJP.

As is known, these two organisations routinely extol India's pre-Muslim past when the Hindus reigned supreme and were the inventors of everything from computers to the Internet to aeroplanes.

As the West Bengal governor, Jagdeep Dhankar of the BJP, has informed us, the Mahabharata's hero, Arjuna's arrows were nuclear-tipped.

What is odd is that the country does not have to resort to such gobbledygook to make its citizens proud of the past.

There are enough evidences of savants like the scientist Aryabhatta, a surgeon like Susruta, the teacher of yoga like Patanjali, grammarian like Panini and many others for any need to flaunt fanciful ideas which can make India the laughing stock of the world.

It is possible that the reason why the far right in India indulges in such drivel is that delving into the past calls for wide-ranging scholarship which militates against the right-wing's anti-intellectual stance.

The insular far right is probably scared that erudition will foster rationality which will be fatal for its tunnel vision focussing on bigotry.

This aversion towards sophisticated knowledge explains the paucity of right-wingers in the academic world.

It also explains RSS chief Mohan Bhagwat's opinion that education (along with affluence) leads to divorce.

Another fascistic element in the worldview of the RSS/BJP is victimhood, which portrays Hindus being under siege from the treacherous minorities, viz. the Muslims and Christians who were classified as Internal Enemies Nos 1 and 2 by Madhav Sadashiv Golwalkar (1906-1973), the second sarsanghchalak of the RSS.

It has been a constant refrain of the right-wing that Muslims will overrun the country with their rapid breeding and the Christians via conversions or by 'harvesting souls' as Pope John Paul II said in 1999.

Related to this propagation of fear is what Stanley identifies as sexual anxiety which has been seen in the charges of love jihad by the BJP/RSS, accusing Muslim men of converting and marrying Hindu women.

If anything, this is another stick in the hands of the far right to beat the minorities with.

Notwithstanding the far right's exploitation of all these factors to gain ground in India, the divisive ideology would not have been able to gain ground if the Congress did not make the mistake in Rajiv Gandhi's time of negating the judicial verdict providing relief to a Muslim woman who had been divorced by her husband.

That foolish act was grist to the RSS/BJP's propaganda mill equating secularism with Muslim appeasement.

If Rajiv had the courage of conviction to support the Supreme Court's judgement as he initially did before backtracking, India's recent history would have been different.