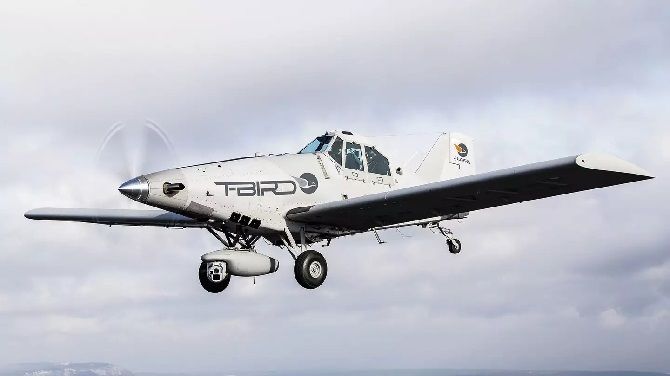 Last Tuesday's Mirage strike on Jaish e Mohammad's training facility in Balakote and the ongoing media frenzy about its efficacy calls for an immediate reassessment of whether our nation needs some special forces air power assets.

Given the current India-Pakistan scenario, a large air strike into Pakistan is going to get increasingly difficult. Maybe a one off attack, but repeat strikes are highly unlikely given the dense air defence environment -- AWACS, radar cover etc.

In the recent past, America's Central Intelligence Agency employed crop duster aircraft like the Thrush 510 G and light helicopters like Little Bird operated by the defence contractor Blackwater in Mali, Iraq and Columbia.

The crop duster aircraft was modified with heavy armour plating and fitted with weaponry like cannons and air to ground rockets to neutralise terrorists effectively. The Austrians are known to have facilitated this.

We can easily undertake these modifications at our IAF Base Repair Depots or even at Hindustan Aeronautics Limited in short time frames to give us a special forces AirPower capability which is vital in the present context.

These aircraft can also be used for Combat Search and Rescue missions, which the IAF has sadly lacked. Imagine Wing Commander Abhinandan Varthaman being rescued by our special forces and the diplomatic fallout for India. More so, as he was reportedly downed very close to the International Border/Line of Control.

There would need to be options and variations in our aerial targeting approach against terror machinery and Pakistan's directorate of inter services intelligence. Standoff attacks against the Jaish's Bahawalpur-type installations or known ISI hubs may be options.

This would, of course, be dictated by our desired escalation matrix.

A combination of conventional IAF airpower and special forces assets as advocated here would give us a much more effective and timely military option.

Variables in weaponry and sensors could be adopted depending on target-weapon matching, Battle Damage Assessment criteria and the like.

A combination of army/navy special forces and IAF light/conventional aircraft may give us optimal attack solutions.

Now the time for the IAF to pressure the government on hardware and weapons provisioning in the anti-terror campaign.

The IAF will have to refocus on this new air campaign, work out the training/tactics paradigm and achieve proficiency at the earliest.

Retired fighter pilots and reservists could always be inducted to carry out these special air missions. I am sure there would be plenty of volunteers for this!!