Why China is wary of Middle-East uprisings

Srikanth Kondapalli says that while China had scuttled popular outpouring a number of times before, a prairie fire is raging across the country.

The Mandarins in China are warily watching the unfolding of popular uprisings in Tunisia, Egypt, Algeria, Bahrain, Lebanon, Libya and other countries. For, while China had scuttled popular outpouring a number of times before, a prairie fire is raging across the country.

A week before Hosni Mubarak resigned, China's foreign minister Yang Jiechi suggested that his country hopes for stability in Egypt. His ministry spokesman Ma Zhaoxu stated that China is critical of any 'foreign interference in the internal affairs' of that country even as he hoped for continuity in the 'strategic cooperation' between the two countries evolved since 1999. In the last decade, China's trade with Egypt nearly tripled from the $3 billion figure in 2006.

Significant business opportunities provided by the automobile assembly plants of Chinese companies Chery and Brilliance in Egypt or the Suez economic and trade cooperation zone project or the Port Said container terminal project built with Chinese assistance could be in jeopardy, although soon after taking over the reins in Cairo the Egyptian military said it will abide by all international agreements signed previously.

China had assiduously built other stakes as well in Egypt, including the party-to-party relations with the then ruling National Democratic Party. Two Confucius Institutes began operations in 2004 at Cairo University and in 2008 at Suez Canal University.

The Chinese reportage from Cairo and other capitals overwhelmingly emphasised on 'chaotic scenes' in the streets leading to instability in the region. These reporters suggested that energy and food prices are expected to rise due to the popular unrest, while their economies are set to decline, with immediate impact on tourism.

This has been the general theme in the Chinese press since reform programme was initiated in 1978. The leadership frequently brushes the public memory about the chaotic situation in the 19th century that led to the disintegration of the Qing Empire a century ago. They cite neiluan, waihuan [internal chaos (leading to) foreign intervention] as justification for authoritarian rule. That was also the pretext for the crackdown at Tiananmen Square in 1989.

Nevertheless, the Chinese cyberspace is busy. Banking on the emergency of net-savvy Chinese, who account for more than 450 million, a number of micro-blogging sites mushroomed in China, including the Chinese twitter-like Weibo from 2009. These have created space for a number of social networks -- with some venturing into criticism of the authoritarian rule as well.

After the popular unrest spread in West Asia and northern Africa, the Chinese government imposed media curbs and several micro-blogging cites content has been 'regulated', while mass text messaging discontinued. However, blogs which praised the Communist Party rule, stability or those critical of 'paid protestors' in Iran allegedly by the US -- all were allowed to flourish.

At three levels, developments in West Asia and Africa could pose challenges to China in the coming years. One, rise in militancy threatens China's hold over minority areas. Several Chinese authorities see the popular surge as a conspiracy from outside, notably by the NGOs sponsored by the Western countries, including the United States. They cite the Rose revolution in Georgia, the Orange revolution in Ukraine, the Tulip revolution in Kyrgyzstan, the aborted purple revolution in Iraq and the saffron revolution in Myanmar.

Li Hongmei, the editor of the Communist Party's mouth-piece People's Daily writing on February 1, predicted that the US is 'playing with fire' in Egypt and the larger region with its policies of promoting Jeffersonian democracy that could only lead to the rise of 'radical and even extremist forces'. Li gushed, "If Uncle Sam's cleverness overreaches itself, he will be hoisted with his own petard."

This is a nightmare for China as well. Soon after the Chinese crackdown of Uighur separatists on July 5, 2009 (which killed 189 people in a span of two hours), the Maghreb Al-Qaeda threatened to target nearly 50,000 Chinese workers in the region.

Secondly, China had witnessed massive protests in the last decade, belying the contention that the people are prospering. According to official estimates, 5,000 protests were reported in 1991, while galloping to 74,000 protests in 2005, 87,000 in 2006, 120,000 in 2007 and 140,000 in 2008. Mounting unrest led the Beijing leadership to drop such references to the official statistics in the work reports to the parliament.

Thirdly, in the backdrop of mounting popular discontent, the issue of political legitimacy is haunting the leadership in China and its model of development. The Communist Party says that it is the legitimate representative of the people and that it follows socialist democracy. Nearly 80 million cadres, through party congresses every five years once, decide the fate of the 1.4 billion people.

As the neighbourhood witnessed democratisation wave since the 1970s, China's party ideologues -- mostly recently Deng Xiaoping's secretary Zhang Weiwei -- argued that modernisation and industrialisation preceded western democracy and that China's path -- in contrast to India or Bangladesh or Sri Lanka where persistent poverty levels question the value of democracy -- is the most viable and correct.

Yet, Chinese in Hong Kong elect half of its legislative representatives directly, while Taiwan has proved that its vibrant democracy coincides with economic prosperity as well. India's growth rates recently belie the Chinese rhetoric.

More importantly, the Chinese model of development could be threatened with the popular uprisings as China had cultivated the ruling elites in several authoritarian regimes across the world and specifically in Africa and West Asia with assistance in lieu of control over strategic resources and international collaboration.

It is not without reason that the Egypt-China Friendship Association defends China or that several of these countries obeyed the Chinese call to boycott the Noble Peace Prize ceremony at Oslo late last year for dissident Liu Xiaobo. 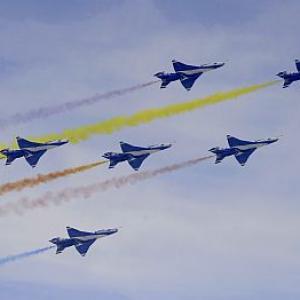