Why BJP snagging Duraisamy from DMK is not a big thing

For the DMK, V P Duraisamy’s exit by itself may not make for much change in the party’s electoral victories in the western belt, where he comes from and which has remained the DMK’s weak spot.

Much of the western belt votes and seats have been with the AIADMK for long. It is also one and possibly the only region in Tamil Nadu where the dominant ‘backward class’ Vellalar Gounder community and the labour-class Dalit-Arundathiyars are on the same political side in electoral terms -- with the AIADMK. 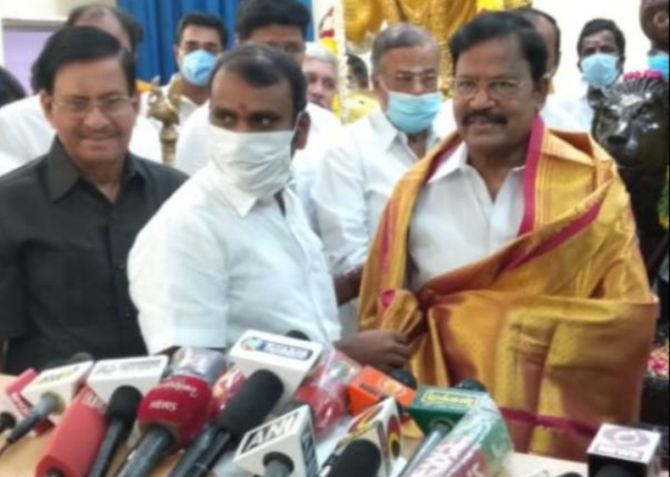 IMAGE: V P Duraiswamy (right) being admitted into the BJP on May 22, 2020, in Chennai. Photograph: Courtesy, Tamil Nadu BJP on Twitter.

By inducting sacked Dravida Munnetra Kazhagam deputy general secretary V P Duraisamy into the party a year ahead of the state assembly elections, the ruling Bharatiya Janata Party at the Centre is not going to gain a great electoral foothold in Tamil Nadu’s western region.

If his personal voter-pull was any indication, Duraisamy’s presence as one of the two deputy general secretaries of the DMK should have helped the substantially in his native Namakkal district in the West, where the party has remained weak for decades now.

On the eve of Duraisamy signing in as a BJP member, in the presence of state party chief L Murugan and party veteran L Ganesan -- no relations -- in the state Kamalalayam headquarters in Chennai, DMK boss M K Stalin divested him of the deputy general secretary’s post.

That followed Duraisamy paying what he said was a ‘courtesy call’ on Murugan, that too a couple of months after the latter had taken over as state BJP president. That meeting also took place at Kamalalayam, a couple of kilometres from the DMK headquarters ‘Anna Arivalayam’, but popularly known as ‘Arivalayam’ since the days of late patriarch M Karunanidhi, who built it and christened it in full.

The nation was in "safe hands" with the BJP, Duraisamy said after joining the party. “You can protect the country if you accept the BJP's ideology."

Duraisamy declared that the chose to tread a different path, adding, "When those in the DMK deviate from the core ideology from which the movement emerged, what's wrong if I quit (the DMK).”

Duraisamy did not explain -- especially where and how the DMK ‘deviated’ from the ‘core ideology’ -- nor did he define what the latter either was.

Only the previous evening after Stalin had replaced him with another Dalit-Arundathiyar party leader, ‘Andhiyur’ P Selvaraj, as deputy general secretary in his place, Duraisamy’s statement said that the DMK had allowed himself to be misled/manipulated by those around -- and against him. He did not talk of ideology, he did not say that the ‘nation was in the safe hands of the BJP’ at the time.

Duraisamy is not the first DMK leader -- or, from the larger Dravidian polity with their sharp ‘anti-Hindutva’ and anti-North political ideology -- to join the BJP. In 2014, D Kumaresan, popularly known by his filmi name Napolean, signed up for the BJP. That owed to continuing personal differences with his brother-in-law and DMK’s strongman in undivided Tiruchi district, K N Nehru.

Nehru promoted Napolean in Tamil filmdom through his contacts, as the other one desired it. He inducted and promoted Napolean in politics because he needed a loyalist. Napolean was the minister of state for social welfare in the UPA-II under Prime Minister Manmohan Singh, from 2009-13.

In the process of continuing family feud with the more powerful brother-in-law Nehru, who was/is a Stalin loyalist, Napolean identified himself with the latter’s estranged elder brother M K Azhagiri, who anyway had been sacked from the party after the DMK lost the 2011 assembly polls the midst of the 2-G scam that rocked the state and the nation alike.

Napolean joined the BJP in the presence of then party president Amit Shah in Chennai, and was promptly name a vice president of the state party. He has since spent most of his time in the US, attending to his son’s health issues.

Likewise, Radha Ravi, the popular-actor son of M R Radha, the Dravidian ideological Pitamaha in the Tamil tinsel world of the ’40s and the ’50s joined the BJP recently, after the DMK sacked him over a controversy flowing from his negative remarks about women in general.

For the state BJP, it all had begun with the arrival of the late Rangarajan Kumaramangalam, who went on to become a cabinet minister in the Vajpayee-led BJP-NDA government at the Centre after the 1998 polls. Ranga, as he was popularly known, remained as minister after the 1999 LS polls, too, until early death took him away in August 2000.

A former Congress leader at the national level, who was a compatriot and competitor to present-day Rajya Sabha member P Chidambaram, who was also PM Manmohan Singh’s senior ministerial colleague, Ranga owed his electoral victories to the AIADMK (1998) and DMK (1999) allies. The BJP did not have many votes in the Tiruchi LS constituency from where he won both times, nor did his tracing the family ancestry to the locality mattered in contemporary electoral terms.

For the BJP, Ranga’s visibility both in the state and national-level mattered, as much as his political pedigree. Ranga’s grandfather, Dr P Subbarayan, was the elected chief minister of Madras Presidency (1927-30), under the British Raj. Subbarayan was also the last president of the Justice Party in the second half of the ’30s, the party identified as the fountainhead of the Dravidian ‘social justice’ ideology.

One of Subbarayan’s sons and Ranga’s father, the late Mohan Kumaramangalam, was a top ministerial aide of Prime Minister Indira Gandhi, and is remembered more for his coining the terminology ‘committed judiciary’ in the years ahead of the infamous Emergency (1975-77). As if this were not enough, Subbarayan’s daughter Parvati Krishnan was a leading light of the communist party movement in the country.

It is not that the DMK was the only Dravidian party from which the BJP effected such poaching. From the rival AIADMK, even when Jayalalithaa was around, the party’s one-time Tirunelveli strongman and one-time state minister, Nainar Nagendran, joined the BJP in the presence of Prime Minister Narendra Modi in Delhi.

The BJP fielded him in the 2019 Lok Sabha polls from Ramanathapuram constituency, where Nagendran did not belong. In the company of the erstwhile AIADMK ally, he lost to the DMK-backed Indian Union Muslim League (IUML) candidate V Navaskani by a margin of over 1.27- lakh votes. It was also among the low victory margins for the DMK-Congress alliance, which swept 38 of 39 LS seats by huge margins.

Ahead of the assembly polls due next May, for the state BJP, the addition of Duraisamy is not an electoral asset by itself. But the new party president Murugan can flag him as a ‘big catch’, especially to the national leadership, which took time naming him, months after the previous incumbent Tamizhisai Sounderarajan was elevated Telangana governor, post haste after the parliamentary polls last year.

As Duraisamy explained his ‘courtesy call’ before the DMK divested him of the party post, the two of them hail from the western Namakkal region. Both of them also come from the Dalit-Arundathiyar sub-sect, which is numerically substantial in the western belt.

In terms of education and employment, they are still in the lowest rung among the three major Dalit sub-sects in the state -- the other two being Adi Dravidars (North) and Devendra Kula Vellalar, DKV (South).

A clear idea about the state BJP’s acceptance of Murugan, who is otherwise seen as a ‘stranger and rank outsider’ to the party’s politics in Tamil Nadu, will emerge only after normalcy is restored post-Covid.

For the DMK, Duraisamy’s exit or even Selvaraj’s elevation by itself may not make much change in the party’s electoral victories in the western belt. Other than in electoral waves in its favour, as in 1996, 2004 and 2019, the western belt has remained the DMK’s weak spot. Whatever votes the Congress party had in its time has migrated towards the BJP since the post-Coimbatore blast polls of 1998 -- then, stagnated or decreased.

Much of the western belt votes and seats have been with the AIADMK for long. This time round, despite the AIADMK-BJP combine’s huge reversal in the LS polls last year, the assembly polls, especially in the region, have become a prestige issue for Chief Minister Edappadi K Palaniswami (EPS), who hails from Salem district in the west.

It is also one and possibly the only region in the state, where the dominant, ‘backward class’ Vellalar Gounder community and the labour-class Dalit-Arundathiyar are on the same political side in electoral terms -- with the AIADMK, that is. While the DMK has been trying its best to make inroads into the twin-community combo-hold of the political rivals, it had not borne fruits when Karunanidhi was around.

It is true that the DMK did win the post-MGR 1989 assembly polls on its own steam, but much of its seats continued to come from the Vanniar-strong northern belt, where the presence of the PMK has ensured a loss of five per cent vote-share for the two Dravidian majors put together -- but much of it otherwise going to the DMK. They need a few (more) seats from the west, also to make up for the losses, but that is not happening in any hotly-contested poll.

Hence, the DMK first making Duraisamy deputy speaker of the state assembly, first from 1989-91, and later in Karunanidhi’s last term as chief minister (2006-11). He was also made the deputy general secretary. As if to balance the local Arundathiyar politics in the western belt, the DMK nominated Andhiyur Selvaraj, a former state minister (1996-2001), for one of the three Rajya Sabha seats that the party could win in a total of six in March this year.

Yet, the fact remains that despite the presence of two supposedly strongmen from the community in the region, the DMK’s vote-share from among the Arundathiyars has not improved through the past years.

Worse still, Karunanidhi’s chief ministerial announcement to provide a three-per cent internal share for the Arundathiyar community from within the constitutionally-mandated 17 per cent for all Dalits in the state, too, did not impress the community voters.

Sections within the state DMK has blamed the community-based DMK leaders for not carrying the message effectively to the grassroots-level. Thus, other than making headlines for a day amidst Covid-centric news, in the state and somewhere in the national media, the current ‘defection’ is not going to make any electoral impact.

Conversely, should the BJP tie up with the AIADMK in the assembly polls, then the chances of the former insisting on retaining the maximum number of constituencies in the region in seat-sharing talks can upset Duraisamy’s calculations on that score.

In between, considering that the Modi government is going to be here for at least until the 2024 LS polls, intended defectors from other parties to the BJP will be seeing the kind of treatment and postings that Duraisamy gets before considering their options.

For other sections within the state BJP leadership, that will also be indicative of president Murugan’s clout with the national leadership.