Who will benefit from a BJP-DMDK tieup in TN polls 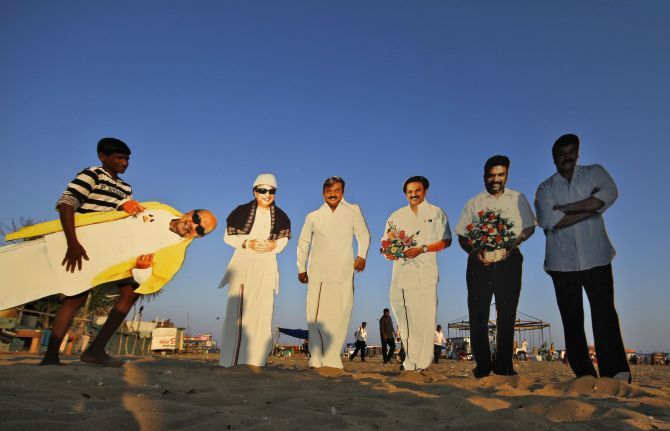 Subramanian Swamy stole the BJP's thunder in Tamil Nadu by meeting the DMDK’s Vijaykanth in Chennai, and his efforts seem to have paid off, at least in the interim, says N Sathiya Moorthy.

The less-than-lacklustre voter reception to the GIM, with promises of Rs 2.4 lakh crore investments, might have made the ruling All India Anna Dravida Munnetra Kazhagam to think twice before advancing the state assembly polls, due in May 2016. Jaya’s valedictory session announcement, while aimed at massive jobs creation ahead of the polls, has instead been the butt of social media jokes and political criticism.

DMK’s five-time chief minister M Karunanidhi was the most vocal in firing the political salvo. As he asked, when the 26-nation overseas visits of Prime Minister Narendra Modi could bring in only a third of the TN announcement for the entire nation, how could Jaya claim what he indicated was something utterly unachievable?

Karunanidhi and other Opposition leaders, like Paattaali Makkal Katchi’s Ramadoss, Marumalarchi Dravida Munnetra Kazhagam’s Vaiko and Congress’s E V K S Elangovan, cited from past Jaya announcements on investment and tabularised them against the final achievements in individual years. Ramadoss and the rest also cited the continuing lack of infrastructure facilities in the state, like uninterrupted power supply and roads, which alone could help actualise what they sought to implicate as falsified reality/claims.

The best of the anti-GIM criticism, particularly of the tongue-in-cheek variety, on Jaya’s claims should go to BJP state president Thamizhisai Soundararajan.

In her continuing criticism of the ruling AIADMK even weeks after PM Modi had shared a one-to-one luncheon with Jaya at the latter’s Poes Garden residence, Thamizhisai quipped that with the kind of revenues the state could now expect from the pronounced Rs 2.4-lakh crore investments, the chief minister should consider imposing ‘total prohibition’ without further delay.

Yet, it was Tamizhisai’s senior, national-level party colleague Subramanian Swamy who stole the BJP's thunder in Tamil Nadu by meeting DMDK’s Vijaykanth in his party office in Chennai.

Swamy’s efforts seem to have paid off, at least in the interim. The DMDK founder, who was seen as moving closer to the DMK in the past weeks, began talking again about contesting the assembly polls on his own.

Implied in Vijaykanth’s claim was the demand that he would accept a coalition in which he is accepted as chief ministerial candidate. From among the national, regional and sub-regional parties in the state, only the BJP is left loose, looking for allies.

Like Vijaykanth, MDMK’s Vaiko too seems to have reportedly gone back on his earlier decision to work with the DMK parent and one-time bête noire, M K Stalin, in the assembly polls. He has fashioned an alliance with the two communist parties and the Thol Thirumavalavan’s Dalit-centric Vidhuthalai Chiruthaigal Katchi.

Going by the Centre’s decision to shelve the Land Bill even after the PM-CM luncheon, indications are that not enough ground might have been covered for their two parties to work as alliance partners in the assembly polls – or, even otherwise inside and outside Parliament.

The AIADMK, PMK, MDMK et al are also independently concerned about the possible loss of  minorities’ votes which PM Modi might have lost for the BJP after candidate Modi had won it for the party in the 2014 parliamentary polls.

The PMK may have also over-burdened itself with the early announcement of former Union minister Anbumani Ramadoss as the party’s CM candidate, a tall order. It has no noticeable presence in admittedly 110 of the 234 assembly segments, and is unlikely to attract any major vote-sharing ally.

Worse off still could be the two national parties -- Congress and BJP. Between the two, Congress’s state unit chief, with his known proclivity to getting into one news controversy after the other, after a meeting with Rahul Gandhi in Delhi, scotched earlier rumours about aligning with the DMK. He has said the party, with around 4-5 per cent vote-share, at best would contest all 234 seats. If nothing else, the Congress high command does not seem wanting to be left in the lurch and so crudely in a big state like Tamil Nadu as in 2014.

The BJP with an even lesser vote-base does not even know from where its allies and votes would come. The Congress-breakaway Tamil Maanila Congress, revived by former Union minister G K Vasan, might possibly be the only party not to make such tall claims.

While all of it may be passé, for each one of the non-AIADMK parties, barring possibly the BJP and the PMK, to strike a better seat-sharing deal with the DMK rival, neither past poll figures nor contemporary political history seem to favour them.

To the extent, the Swamy kind of pre-poll calculations may be hinging on political and legal possibilities rather than poll-time probabilities. This time round, it hinges on the 2G scam verdicts against the DMK and the Jaya property case appeals verdict by the Supreme Court.

Post-’91, when the DMK was down and out, and the ruling AIADMK was running roughshod over the Congress ally at the Centre, similar calculations went awry and helped the DMK to return to power. Even the AIADMK found out, rather post-’96, that its assumptions about the DMK rival had gone woefully wrong.

In the last 2014 outing, the DMK polled 25 per cent votes, up from the lowest 22.5 per cent in 1991. It did not win a single Lok Sabha seat, and came only a distant second, if not third, in most constituencies that it contested.

Against this, the ruling AIADMK swept all but two seats in a total of 39 LS seats in the state and also the lone Puducherry UT seat, polling a high 45 per cent vote-share.

The current assumptions are also based on this wide gap that the DMK would need to fill to aspire capturing power. Put in a nutshell, the AIADMK got as much votes as the rest of them all put together -- that included the ideologically incongruous Congress, communists and the BJP.

Yet, the fact remains that contesting alone the communist parties proved their real worth – by polling less than 1.5 per cent vote-share. The BJP’s average, standalone vote-share too is yet to cross that mark. The Congress’s vote-share would have halved after the exit of the TMC.

The MDMK has rarely crossed the three per cent mark after 1996, when it polled 5.5 per cent vote-share. The DMDK too could not transfer all of the 10 per cent voter-share polled in 2009 parliamentary polls to the BJP-led NDA alliance in 2014.

The PMK could hope to get about five per cent unless there is a different turn of casteist events between now and the assembly polls, particularly involving the Dalits in the northern districts.

Today, individual non-DMK opposition combinations thus cannot hope to amass more than five per cent each, to the maximum. Against this, their expectations from the DMK in terms of seat-share could be disproportionate to their vote and cadre-contribution. In turn, it could hurt the DMK cadre aspirations and sentiments, too, as had happened occasionally in the past.

One thinking in select sections of the DMK seems to run thus. For broad-based alliance, the party would have to stick to Karunanidhi as CM candidate, which could lose GenX voters for the party, for a variety of reasons, staring with ‘generation-gap’.

Any such gap could be made up by the DMK contesting alone in as many constituencies as possible, and with Stalin, the self-styled ‘Mr Clean’ in TN politics with a relatively better chance of becoming CM after Jaya and Karunanidhi.

The tougher task for the DMK, whoever the chief minister, is to attract the near 20-per cent non-committed, ‘swing voters’ who had wholly sided with the AIADMK in 2011 and 2014.

While in the past, there had been clear signs of their taking the middle-path first and pro-DMK whenever the AIADMK was in power, neither is visible now.

But this section of the DMK, particularly identified with the Stalin camp, feels that unlike in the past, the ‘non-committed’ voters do not come out openly ahead of the polls, as in the past. “We too paid for our assumptions otherwise, both in 2011 and 2014, but they are already ready, to vote for whoever can defeat the AIADMK and Jaya.”

Tall claims it might seem just now, but given the fractured Opposition vote-bank, the DMK, more so under Stalin, could become the focal-point for the undecided, traditionally anti-incumbency ‘swing voters’. Just as attracting them solely to their side would be the DMK’s problem, the AIADMK still seems unwilling to accept that they could part company precisely at poll-time -- and strategise for the same.

Image: A worker carries a cut-out of Dravida Munnetra Kazhagam chief M Karunanidhi next to the cut-outs of other political leaders installed for display at Marina beach. Photograph: Babu/Reuters