'Are moving towards a political culture that provides more space for violence and a paranoid political rhetoric,' asks Nitin Desai. 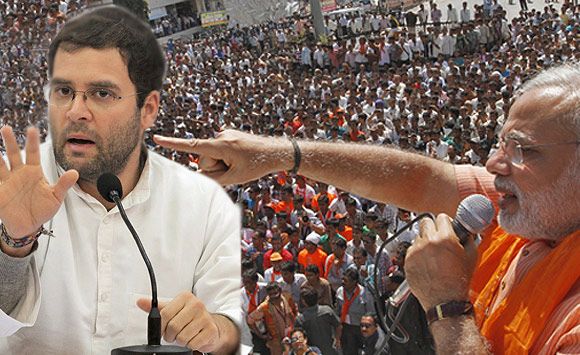 Fifty years ago the American historian Richard Hofstadter wrote a seminal essay, 'The Paranoid Style in American Politics.' The context was the emergence of Barry Goldwater as a presidential contender with the support of the extreme right.

Hofstadter used the term 'paranoid' to capture the distortion of facts and misplaced fears of conspiracies that underlie extremist political rhetoric.

He used a term from psychology to describe the tone of political rhetoric rather than to suggest that extremist politicians are certifiable lunatics, though sometimes that possibility seems quite real!

In a telling phrase he describes American politics as 'an arena for angry minds,' a tendency that has resurfaced in the current presidential race with violence in political rallies being openly encouraged by a right-wing outsider who is trying to muscle his way into the White House.

Europe's drift into racism and dictatorship in the 1930s inspired a deeper analysis of authoritarianism by theorists of the Frankfurt school, notably Erich Fromm, in the fifties. Another group of academics led by Theodor Adorno approached the matter more directly in their psychological analysis of the authoritarian mind.

Leaving aside the very interesting Freudian dynamics underlying their analysis, their listing of the traits of the authoritarian personality is very relevant for us today.

These include a strong belief in the sanctity of conventional norms of behaviour, particularly in sexual matters, submissiveness to the authorities who impose these norms, stereotypical views of the 'other', often identified with a religious minority, who are seen as violating these norms, aggressiveness towards this 'other' and violence against the 'other' as a way of imposing a norm and working out their insecurities.

This description of a personality type resonates with what one sees among Hindu Rashtra fanatics these days. The ruling party's failure to disown these extremists has led to a fear that the parallel may extend to the emergence of authoritarianism as it did in Germany in the 1930s.

Some of this may be overdone anxiety as democratic dissent is possible and well protected by law, as we have seen in recent events. But on a broader front, looking beyond the Jawaharlal Nehru University episode and noting the increasing incidence of vigilante violence one must ask: Are moving towards a political culture that provides more space for violence and a paranoid political rhetoric?

An aggressive and strident vocalisation of nationalistic slogans is now expected and a legislator is punished for not joining in this.

A television anchor hectors and berates panellists who refuse to join in his strident condemnation of those tarred with the charge of anti-nationalism.

A few outsiders shouting anti-nationalist slogans at a protest meeting becomes an excuse for excoriating an institution whose intellectual attainments ought to be a source of pride.

Of course, the saving grace is that this is done in such a ham-handed fashion that a young scholar in his twenties starts rivalling a media savvy prime minister in public popularity!

Our political leaders and media stars shape the vision that young people have of what they want to be. Nehru did that for my generation. Today there is no one who can convey that mix of secularism, rationalism, internationalism and the joy of diversity that is our Nehruvian heritage.

Today's leaders grew up in the confused post-Nehru era and are seen as spokespersons for a region or a community or caste or for some single goal like eliminating corruption.

Lately, many of them have been behaving in a manner that is stridently intolerant of any different point of view. So aggressive has this become that some of them advocate extra-legal violence against the dissenters.

Have they considered the implications for our multi-cultural society and for our cherished democratic polity of this advocacy of junglee law?

Should the rest of us also not ask why such pathological types thrive in our politics?

The unity of India depends on the survival of its rambunctious democracy and on a political and social system that provides space for all its diverse religions, communities, language groups.

We have to respect dissent because our Constitution requires this and the extremists who counter dissent with ultra-nationalist sloganeering are the real anti-nationals, and not those who assert their right to be different.

The youngsters who are being dragged into this battle of atavistic nationalism will live their lives in a world where economies are interconnected by global value chains, societies are linked by migrant diasporas, cultures talk to one another through the global reach of mass media and the transnational flow of resources and pollutants link ecosystems across national boundaries.

It will be a world where success will come to countries who are most willing to frame their national goals in a broader context of global trends and compulsions. This will not happen if our universities become battle grounds where extremists of all persuasions leave no space for an open-minded debate about ideas.

The breakdown of democracy often begins in universities when warring ideological factions destroy the ethos of open enquiry. We cannot change the culture of discourse in the political and media space because competitive nationalism may well win votes and viewers.

But universities, where the outlook of the political leaders, the media personalities and, most importantly, the teachers of tomorrow will be shaped are designed for free discourse.

Therefore, let us begin there and get our politicians and their student wings to agree that schools and universities will be out of bounds for authoritarian aggression and violence and will be a public space for dialogues of good faith, where you teach and learn at the same time and converse not just to convert but also be open to be converted.

Free universities and a judiciary committed to protect the Constitution will help to tide over this phase of dysfunctional politics.