'The cow can always be the CAUSE.'
'Cause for murder. Cause for setting India's people against each other.'
'Not recognising the fact that this can tip the country into an unending spiral of civil strife is the ultimate stupidity of all,' says Shuma Raha. 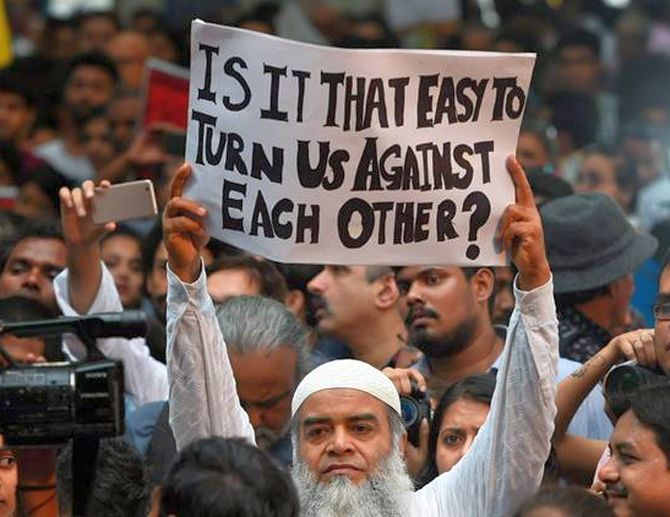 Sometimes a single utterance can encapsulate the spirit of the times.

Last month Rajasthan BJP President Madan Lal Saini made one such singular utterance. On July 24, the honourable leader said that when Mughal emperor Humayun was dying, he called Babur and told him, 'If you want to rule Hindustan, you must keep three things in mind -- respect cows, brahmins and women.'

The boneheaded stupidity of the statement leaves you slack-jawed.

First, it shows that Saini has got his history back to front.

Any school kid knows that Babur was the father of Humayun and not vice versa, and for the latter to summon the former in his dying moments (Humayun died 25 years after Babur did), he would have had to have some serious ties with the spirit world.

To add imagination to ignorance, Saini dreamed up a little piece of theatre, a fictive tête-à-tête between two great Mughal kings on how important cows and caste were to the dwellers of this land.

Oh, yes, Saini also added women to his list of venerables -- although one isn't sure if this includes girls and women who wear jeans or short skirts or stay out late in the night, which, according to many of our political leaders, is an open invitation to men to commit rape and murder.

Needless to say, Saini's words evoked guffaws on social media. He was roundly pilloried for his charming ignorance of the chronology of the Mughal dynasty and the way he had shoehorned the bovine and the Brahmin into his sermon on ruling 'Hindustan'.

But there was more to his statement than its unintentioned humour.

To me, it seemed like a grim epiphany -- a chilling distillation of the fakery and anti-intellectualism toxifying the discourse in India today.

The Oxford English Dictionary defines anti-intellectualism as hostility to intellectual reasoning. This is exactly what we are witnessing in India now.

The rejection of reason is playing out at various levels.

It's playing out in brazen distortions of historical facts, where the victor is turned into the vanquished or major historical figures erased from school text books and marginal ones pushed into their place -- all to stitch up a cultural narrative predicated on so-called Hindu pride.

When ministers say that our ancients knew plastic surgery or knew how to build planes, when they assert that cow urine can cure cancer or that the cow has the unique ability to exhale oxygen, you marvel at their utter contempt for facts and their serene conviction that the people of India will swallow their fantastical claims.

What's terrifying is that so many people are actually swallowing them.

You manufacture a targeted consternation around 'love jihad', whip up fear and suspicion that Muslims boys are luring Hindu girls away, and you have mobs beating up young men, trying to squash inter-faith love, or even a government officer refusing to renew the passports of an inter-faith couple.

You keep up a relentless frenzy around the sacredness of cows and the need to protect them, and soon, people are ready to kill in the name of the cow.

The only realities are blind belief and a bloodthirsty majoritarian machismo fuelled by fakery, demagoguery, or maybe a rumour gathering vicious steam on WhatsApp.

According to a recent report by the data journalism Web site IndiaSpend, 34 persons have been killed in incidents of cow-related violence since 2010 and 98 per cent of all such incidents took place after 2014.

Saini's bizarre statement came on the back of yet another Muslim man dying after being severely beaten by a group of cow vigilantes in Alwar, Rajasthan.

And it checked all the necessary boxes: The overturning of history, the delicious (but false) proposition that a medieval Muslim emperor recognised the sanctity of cows, the emphasis on the hierarchy of caste, and the implicit insistence that the cow can always be the CAUSE.

Cause for murder. Cause for setting India's people against each other.

Not recognising the fact that this can tip the country into an unending spiral of civil strife and set the much-vaunted 'India story' back by years is the ultimate stupidity of all.