'It is strange that a country like India, which had gone through crisis after crisis resulting from militancy, insurgency and terrorist attacks, should still be practising ad hocism in managing its security imperatives,' says B S Raghavan, former member of the Joint Intelligence Council. 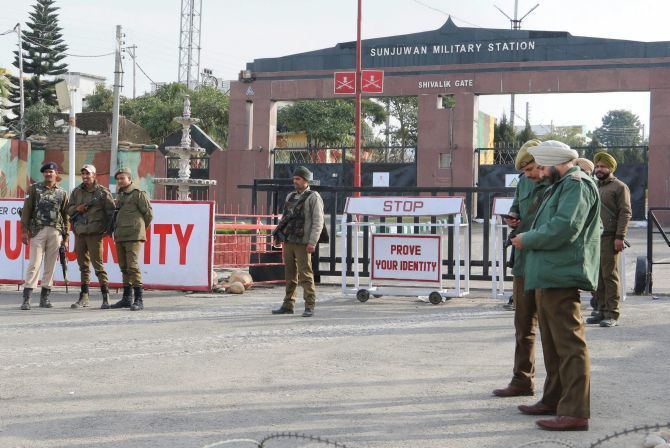 IMAGE: Six soldiers were killed in the terror attack on the the Sunjuwan military base in Jammu, February 10-11. Photograph: PTI Photo

It was not until 1998, a full 50 years after Independence, that the government set up the country's first National Security Council.

When, around that time, K C Pant was assigned by Atal Bihari Vajpayee's government the task of preparing a blueprint for the council setting out its functions and the composition, he found handy my two-part article in The Hindu, published on August 11-12, 1989, in which I had drawn attention to the glaring gaps in India's security policy planning and suggested the format of a charter for the Council to suit Indian conditions.

An exchange of letters and a discussion between us followed, which led to the incorporation of the salient ideas I had been advocating. It is quite another matter that the NSC has not lived up to the expectations raised and has been in a moribund condition.

One of the very first projects undertaken by the NSC ought to have been the drawing up of a cogent and comprehensive national security doctrine for the country, taking into account not only the internal and external security environment and their inter-linkages and implications, but also the Constitutional, political, social, economic, financial, scientific, technological and business and commercial dimensions of national security.

The next anyone heard about any exercise relating to security was the unveiling of India's nuclear doctrine on August 17, 1999, by then national security advisor Brajesh Mishra.

It laid down the 'fundamental purpose' of Indian nuclear weapons to be to deter the use and threat of use of nuclear weapons by any State or entity against India and its forces.

It also declared that India would not be the first to initiate a nuclear strike but will respond with punitive retaliation should deterrence fail.

It was good as far as it went, but it was confined to only the nuclear aspect of India's overall security framework.

There was a sudden media flutter in March 2009 to the effect that 'Forced into action by a dramatically changing security environment that has only worsened since the Mumbai attacks (26/11), the UPA government (had) started drawing up a first-ever national security doctrine'.

There has been no word since then as to the progress made in that direction.

There has obviously been none for, on October 22, 2010, we find the prime minister, Dr Manmohan Singh, calling for an 'enlightened national security policy', with the concept of contemporary national security being set 'within a wider strategic and economic and social matrix', and based on a 'holistic appreciation of the inter-related aspects and concerns impinging on a nation's overall well-being.'

He also stressed the importance of modernisation of 'defence doctrines', in view of the indispensable role of military power in buttressing the nation's stability and strength, and its ability to defend itself against armed aggression or insurgency.

It is strange that a country like India, which had gone through crisis after crisis resulting from militancy, insurgency and terrorist attacks, surrounded by dangers inherent in confronting, on the one side, a neighbour aspiring for global hegemony and, on the other, a failing State flaunting a nuclear arsenal ever facing the risk of falling into jihadi hands, and other imponderables on the global arena, should still be practising ad hocism in managing its security imperatives.

Contrast this with the US where its NSC is vibrant and active and each president, on assuming charge, is required by law to make public the national security doctrine that his administration intends to follow.

President Donald J Trump's administration is yet to come out with its formulation.

A national security doctrine for India is long overdue. A vision and mission statement of the kind will impart a sense of purpose and direction and a self-regenerating momentum to organised efforts on that front.

It must embody the country's larger policy goals in which the security doctrine, if it is to be both convincing and effective, has to be anchored.

It will be wrong to interpret security purely in terms of armaments, arsenals, weapons systems, and other military hardware, or to expect to quell insurrections, insurgencies and other outbreaks of unrest by applying force alone.

The processes of governance and the working of the State machinery should be so designed as to remove all scope for alienation or hostility driving people to resort to desperation and resistance.

In view of the interconnectivities of the borderless, global village that the world has become, the national security of any one country is impacted by the conditions prevailing in other countries which, in turn, have a bearing on their security.

Environmental security is a prime example of a situation where national borders, and even national sovereignties, are of absolutely no relevance.

The eruption of Iceland's Eyjafjallajökull volcano in March 2010 and the traumatic effects of the multiple catastrophe that struck Japan in the same month in 2011 had implications for the economy, and indirectly for the security, of the rest of the world as well.

Stemming from the above reasoning, there is a view that country-specific approach to security has become outmoded, and the aim must now be to have a doctrine that encompasses the entire world.

In other words, the proposed new normal is that there must be a shift from a national to a global model of security.

However, this may not be an acceptable proposition yet. For, even in an interconnected and interdependent world, each country has distinct security dimensions which justify country-specific treatment.

They fall for this mistaken approach because it is the least demanding and draws on conventional wisdom.

Instead, security planning should be a dynamic, proactive process, of which the central goal should be to bring about changes in the security environment itself so as to reduce the extent and severity of the threats to the country and maximise the gains in terms of peace, stability and economic and social well-being of the people.

For instance, by being focused on adopting a policy of accommodation, understanding, goodwill, and friendship towards its neighbours in a spirit of self-confidence and self-assurance, India can do a lot to transform the heated security ambience into one of mutually fruitful co-opetition (a blend of cooperation and competition).

Any amount of creative energy, innovation and ingenuity spent on such a forward thrust by leveraging the country's stature deriving from its democratic credentials, military prowess, past accomplishments and diplomatic capabilities is worthwhile for several reasons.

First and foremost, it forces the country's ruling dispensation, combining within itself the political class, the policy-makers and the defence and security establishments to do some fresh and original thinking, and have a scrutinising second look at the validity of old assumptions, fixations and obsessions.

Second, to the extent it enables jettisoning of the baggage found to be of no use in the current context and foreseeable future, it helps in the reordering of priorities in tune with the newly fashioned security landscape.

Third, it stops the haemorrhage of resources in defence build-up, para-military, police and intelligence establishments, insures against surprises by constant readiness against attacks, and helps re-direct resources for the country's overall progress and development to raise the quality of life of its people.

Fourth, the very fact of a country demonstrating its willingness to reach out and build bridges will have a multiplier effect among other countries, especially those with whom the relations were previously tense, by lifting the levels of trust and faith in each other, and thus work to the benefit of all.

The most vital point to remember in all this is that security itself has become indivisible. The lethality of any conflict or confrontation, whether inside or outside the country, is today of a scale that merits the apt acronym MAD (mutually-assured destruction).

To borrow a verbal barb from Winston Churchill, all the idiot children have the matches. It no longer makes sense to compartmentalise security into internal or external or ignore the impact of food, energy and livelihood security, and indeed, of the economic milieu as a whole.

A casual, case-by-case approach to defence or security policy, overlooking the importance of dovetailing it with the country's total planning effort and economic, industrial and agricultural policy framework is a clear invitation to disaster.

Finally, the government should promote an informed debate on security issues by taking people and Parliament into confidence.

A strong and enlightened base of citizen awareness is essential to guard against the government acting on momentary prejudices and impulses.

Forging a national consensus on vital and sensitive issues of national security is an invaluable adjunct of security policy formulation, as it will be reflective of the nation's collective will that no one dare trifle with.

I would even forcefully plead that there is no need to wait passively for the government to act.

There are so many distinguished diplomats, security experts, military veterans and policy makers who have, in their time, handled macro- and micro-security and strategic issues. They should get together and work on a national security doctrine according to their best lights and present it to the government as a spur to action.

B S Raghavan is a former member of the Indian Administrative Service who has been head of the political and security policy planning division at the Union home ministry, and member of the Joint Intelligence Council between 1961 and 1969.