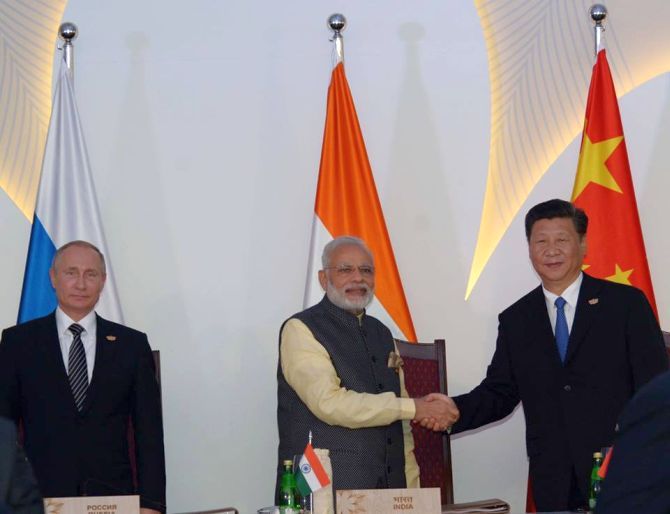 The BRICS summit made clear that China's support for Pakistan is unwavering.
China will continue to pressure India to ease tensions with Pakistan and resolve the Kashmir dispute, says former RA&W officer Jayadeva Ranade.

The recent BRICS summit in Goa on October 15-16 gave this economic entity, which has since its creation at China's instance largely lingered on the margins of international economic activity, considerable publicity.

On centre-stage were the palpably strained India-China relations.

Noticeable was the sharp divergence in views between the two countries on crucial issues like combating terrorism and China's opposition to India's efforts to join the Nuclear Suppliers Group and, implicitly, the United Nations Security Council.

Discussions at the summit and its agenda anticipatedly highlighted China's unstinting commitment to Pakistan and projected Pakistan as a factor in India's relationships with China and Russia.

India's priority was to use the forum to emphasise Pakistan's role as a sponsor of terrorism.

It tried to advance efforts to isolate Pakistan by getting the Goa Declaration to include a condemnation of Pakistan.

In the end it didn't succeed due to China's opposition.

The presence of BIMSTEC (Bay of Bengal Initiative for Multi-Sectoral Technical and Economic Cooperation) member countries did, however, help to bolster India's charge against Pakistan.

Russia too while extending support avoided any reference to Pakistan.

India additionally used the forum to discuss contentious bilateral issues with China and reassure Russia that Indo-Russia relations remain unaffected by the growing proximity between India and the US.

While there was no public reference at the BRICS summit to the recent Russia-Pakistan military counter-terrorism exercises, India's unhappiness at this had been voiced earlier by its ambassador to Moscow.

Whether the sizeable arms deals concluded with Russia at the summit succeed in cooling Moscow's dalliance with Islamabad remains to be seen. 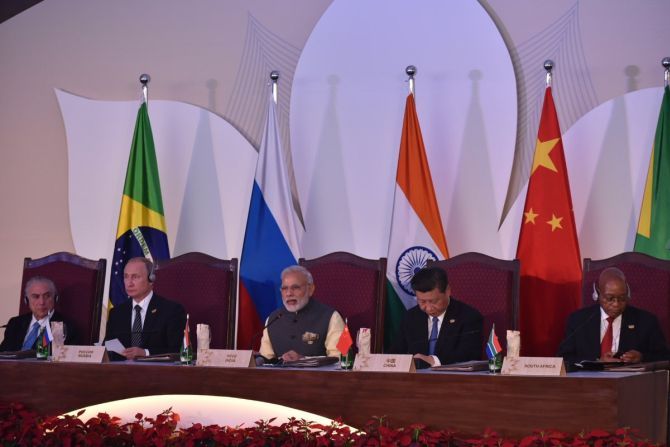 Well before Chinese President Xi Jinping's arrival at the summit, Beijing had given clear indications that it would not back off from its opposition to India's admission to the NSG.

It had also declared that it would neither yield ground on the issue of blocking India's efforts at the UN Sanctions Committee to list Pakistan-based international terrorists Syed Salahuddin, Muhammed Sayeed, Zaki-ur Rahman and Masood Azhar.

Beijing, which since April 2015 been urging India to ease tensions with Pakistan and resolve the Kashmir issue, on this occasion too sought to pressure India on the issue.

Pertinent is the article in China's official English language Global Times on October 11, which reacting to Union Home Minister Rajnath Singh's remarks, candidly asserted that India's decision to seal the borders with Pakistan in Kashmir will damage India-China relations.

In a clear and frank enunciation of the official Chinese view, it quoted Hu Zhiyong, research fellow of the Institute of International Relations at the Shanghai Academy of Social Sciences, as saying 'India is making a very irrational decision, since no exhaustive investigation has been conducted after the Uri incident, and no evidence proves Pakistan is behind the attack.'

'The country's decision reflects its Cold War mentality,' Hu said, 'and would only cause deeper hatred among residents living in Indian- and Pakistan-controlled Kashmir. Since Pakistan is China's all-weather strategic partner, India's decision would make China-Pakistan-India relations more complicated.'

Pointing to China's direct interest in the matter, Hu added that 'a peaceful resolution on the Kashmir disputes is in the interest of China's homeland security, especially its western regions.'

China came to the BRICS summit with clear objectives.

Top on its agenda was to prevent any negative developments that could mar the atmosphere or tarnish China's image.

Second was to prevent Pakistan from being named by BRICS as a State that sponsors terrorism.

On the economic front it was keen to get the BRICS nations to agree to designate themselves as a free trade zone; promote the New Development Bank and get it international acknowledgement as a global financial institution; and persuade India to sign on to the 'One Belt, One Road.'

Senior Chinese officials and China's official media had commented prior to the BRIS summit that the member-nations need to revive their economies and, in this context, proposed a free trade zone. 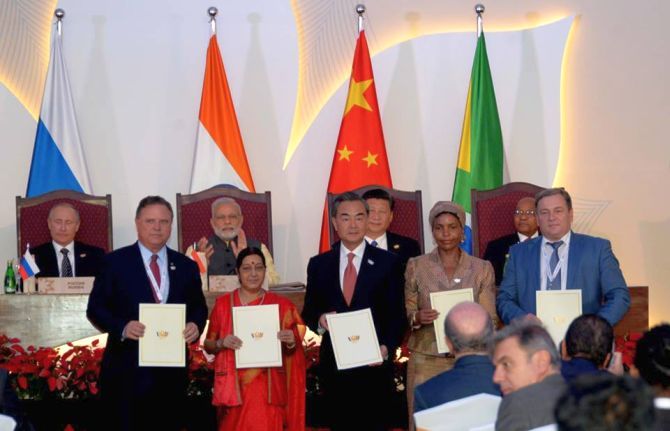 IMAGE: Foreign ministers of the BRICS countries with the agreements signed at the BRICS summit in Goa. Photograph: BRICS/Facebook

In his remarks at the summit, Xi referred to the need for such an arrangement.

China has for years been pushing for a Free Trade Agreement with India to allow its goods greater and unlimited access to India's market.

This has been resisted also because of the barriers unilaterally imposed by China on India's highly competitive Pharma, IT, healthcare etc sectors and the $54 billion trade deficit in India-China bilateral trade.

Chinese trade laws are also well known to be arbitrary, with portions classified as secret often being cited as unpleasant surprises.

There was no agreement on the free trade zone.

'BRICS countries,' Li wroted, 'also coordinate frequently in global and regional security issues. All the countries are major powers in their regions and have their own concerns. Therefore, it is normal that their views over regional affairs differ.'

Thereafter, he inserted the Kashmir issue with India's efforts to label Pakistan as a sponsor of terrorism and observed: 'As for the decades-long Kashmir issue, BRICS countries can only play a mediating role rather than support one side while isolating the other. They cannot simply label a country as "supporter of terrorism".'

In his remarks on October 16 in Goa, Xi also spoke about the need to find a 'political solution' to 'regional hotspots' and called for concrete efforts and a multi-pronged approach that address both 'symptoms and root causes' to global challenges like terrorism.

'Regional hotspots' is Beijing's codeword for Kashmir and this reference should be viewed in the backdrop of earlier suggestions by Chinese leaders to mediate in the Kashmir dispute.

Xi also pushed the 'One Belt, One Road' concept saying, 'Through the BRICS summit, India wants to advance its Act East policy and promote linkage between India and some South Asian and Southeast Asian countries, which are also partners in China's One Belt and One Road initiative.'

For India the BRICS summit made clear that China's support for Pakistan is unwavering.

It underscored that China will continue to pressure India to ease tensions with Pakistan and resolve the Kashmir dispute and that Beijing has made this a pre-condition for improving India-China relations.

By pointing to its strategic interests in the area, China has indicated its direct interest in Kashmir.

Jayadeva Ranade, former additional secretary, Cabinet Secretariat, Government of India, is president of the Centre for China Analysis and Strategy.