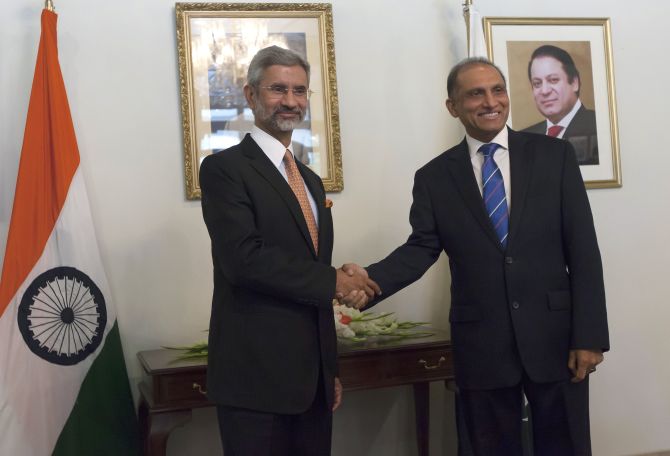 Pakistan's holy trinity -- its government, military establishment and the ISI -- differ on domestic and foreign policy issues.
So when India talks to the Pakistani political leadership it can't be sure that the promises can be delivered, says Brigadier S K Chatterji (retd).

India hosted the The Heart of Asia Senior Officials Meeting in New Delhi on April 26 and the foreign secretaries of India and Pakistan get another opportunity to restart the Comprehensive Bilateral Dialogue between the countries, which has been stalled for sometime.

On December 25, Prime Minister Narendra Modi stopped over at Lahore on his way back from Kabul to wish Nawaz Sharif, his Pakistani counterpart, a happy birthday. Apparently an impromptu decision, it was also historic to say the least against the backdrop of the sub-continent's geopolitics.

The initiative was bold on the part of both leaders, and an absolute bolt from the blue for anyone who follows the repeated attempts to hold a meaningful dialogue between the two nations.

The opportunity that the two leaders had created received a huge blow from the terror attack on the Indian Air Force base at Pathankot on January 2. The Indian side concluded that the attacks were masterminded from Pakistani territory and conducted by Jaish-e-Mohammed terrorists led by Masood Azhar.

Although seemingly derailed, the hopes of the talks being resumed received a shot in the arm when Pakistan declared emphatically that it would cooperate in the Pathankot investigation. A Pakistani investigating team visited India, only for the Pakistani media to announce immediately on its return that the team had concluded that the attacks were orchestrated by the Indians themselves.

At the very best, such a conclusion could be labelled as woefully presumptuous. With the evidence being primarily provided by the Indians, surely they would not have provided self-incriminating material.

Notwithstanding the Pakistani team's observations, there was still some hope of the talks going ahead. After all, this was not the first time that India had blamed the powers that be in Pakistan for a terrorist attack on its soil.

A few days later the Pakistani high commissioner to India stated that the peace talks were 'suspended.' All hopes of the talks progressing were shelved.

It would be relevant to digress at this point and recall the circumstances for the cancellation of similar talks in New Delhi in August 2015. The Pakistan high commissioner had invited separatist leaders from Jammu and Kashmir for consultations just prior to the talks in spite of being firmly told to desist from such actions. The Pakistani envoy did not budge. The Indian government responded by cancelling the talks.

Globally, such parallels of one country allowing its separatist leaders to meet the ambassador of another country that provides moral and material support to a decades-long insurgency are rare if not non-existent.

The dichotomy leads to the question was the Pakistan high commissioner in effect informing all and sundry of the Pakistani military headquarters' message that Nawaz Sharif had gone beyond his brief by hosting the Indian prime minister on his birthday. Also stating in the bargain that General Raheel Sharif, the Pakistan army chief, was the man to decide such matters and not his namesake.

That is the problem India faces when it is time for talks with Pakistan. A syndrome best understood when the trinity of powers that rule Pakistan -- its government, military establishment and the Inter-Services Intelligence -- are kept in focus.

The constituents of the trinity have contesting interests and differ in their approach to Pakistan's posture on both domestic and foreign policy issues. So while Pakistan High Commissioner Abdul Basit spoke the language of the Pakistani military establishment, the foreign ministry spokesperson expressed Nawaz Sharif's stance.

The tug of war between the three power centres only draws Pakistan into a more murky state with insurgencies and terror attacks in Pakistan not just confined to its North West Frontier Provinces or Baluchistan, but Karachi, Lahore and Muzaffarabad.

The problem of talking to Pakistan's political leadership without the assurance that what the team sitting across the table promises forming the basis of the Pakistani approach to issues is not one faced by the Indians alone. The Americans surely experience the same scepticism.

Though Nawaz Sharif can assure the American leadership on the course Pakistan will adopt, the deliverables may not be within the Pakistan prime minister's powers to ensure.

The trinity in Pakistan may soon witness an increase in its membership. With the jihadi establishment's writ running in large areas of Pakistan it is possible that this establishment will also find a place at the high table of decision making, by virtue of its grip on the State complemented by the fact that both the Pakistan army and the ISI consider the jihadists a strategic partner.

At the vortex of such a churn lie the nuclear weapons that Pakistan has accumulated. The best organised jihadi groups like Al Qaeda, Lashkar-e-Tayiba and even Islamic State now have firm roots in Pakistan and Afghanistan.

Can they, having crept up to take their place at the high table of decision making, have their sway and extend their reach to pluck a few from the nuclear pile? With the reports of radicalisation within Pakistan's armed forces, shouldn't that be an option India needs to take into account?

We have a cocktail that has the potential to deliver more than the dirty bomb the world has been trying hard to keep away from the jihadis.