What will Kim Jong Un do next?

Kim did not rule out diplomacy with the Biden administration despite that Pyongyang called Biden a 'rabid dog' after Biden labelled Kim a 'thug'.
Dr Rajaram Panda explains what North Korea's unpredictable leader is up to. 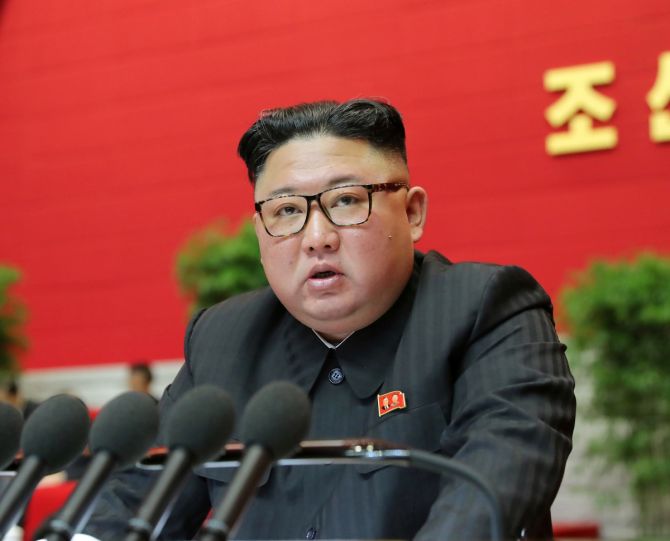 North Korea had its eighth congress of the Workers Party of Korea from January 5 to 12, 2021.

Though originally conceived to be held every five years, the past seven congresses suggested that is not a fixed pattern. The last WPK congress was held in 2016.

The coming months of 2021 are expected to be an interesting one for North Korea and the Kim Jong Un regime shall keep analysts and watchers of the Korean peninsula issue busy.

The timings of the WPK congress need to be seen in the context of Pyongyang's new possession of an ICBM and SLBM, a new US administration, and unpredictable inter-Korean relations.

Much of what transpired and what Kim probably has in mind in the coming months could be discernible from what was discussed and what policy decisions were taken during the eighth WPK congress.

The fact that the congress culminated in yet another military parade could be a pointer to what possibly would unfold in the coming months.

With COVID-19 still raging worldwide, any view that North Korea would lose some of its news value is likely to be misplaced.

What are the main takeaways from the WPK congress?

North Korea confirmed the development of hypersonic missiles. In his report to the congress, Kim confirmed the country's 'conducting research into perfecting the guidance technology for multi-warhead rockets at the final stage'.

So, this is advancement in North Korea's missile technology. The potency of MIRV technology is that all of the warheads in an MRV follow the same trajectory, while a MIRV's warheads can be directed at different targets.

Since Kim mentioned the 'final stage', it means Pyongyang has yet to acquire this technology. But given the progress it has made in missile technology, the confirmation of its success and perfecting MIRV technology that would allow the warheads to separate and independently hit different targets after launch may not be far off.

When that happens, North Korea could pose a significant military threat to the US and the region.

Further, North Korea has also chosen to develop a nuclear-powered submarine and an underwater-launch nuclear strategic weapon, which would raise the country's long-range nuclear striking capability.

The planned submarines would be powered by nuclear reactors rather than diesel engines and would carry SLBMs.

Kim has a fixed target of 2022 of completing to build the planned submarines that would carry the Pukkuksong-5, the country's finalised SLBMs.

This announcement days before Joe Biden was to move to the White House is clearly meant to send a significant message to the new US president that North Korea's concerns needed to be heard and cannot be brushed under the carpet.

Having sat with Donald Trump across the table three times as equals Kim has made his intention clear that his regime 'would approach the US on the principle of power for power and goodwill for goodwill in the future too'.

The major decision that was taken during the congress was to elevate Kim Jong Un to the rank of general secretary of the Workers Party of Korea.

This was a title posthumously reserved for his father Kim Jong Il. Kim had kept this seat vacant for nine years after his father died and was content to be chairman of the WPK.

His deceased father remained the symbolic 'eternal general secretary' months after his death in December 2011.

North Korea's only reliable ally, China, expectedly welcomed the news. Chinese President Xi Jinping lost no time in sending a congratulatory message to Kim on his elevation and called for strong relations between the two countries.

What does Kim's elevation mean to the WPK and his status?

In short, it would mean that Kim will lead with a party-centred system that the regime believes will help Kim further cements his authority.

Most socialist States, including China, do not use the chairman position. Having consolidated his position already as chairman of the WPK, Kim's elevation now would mean from now on he shall have a free hand to use a party-controlled central system 'making the party's ruling practices more functional in his rule'.

Accordingly, the previous party rules adopted in the 2016 WPK congress had to be amended, renaming the official titles of chairman, vice Chairman into a chief secretary, secretary. The organisational structure of the party was also rechristened. 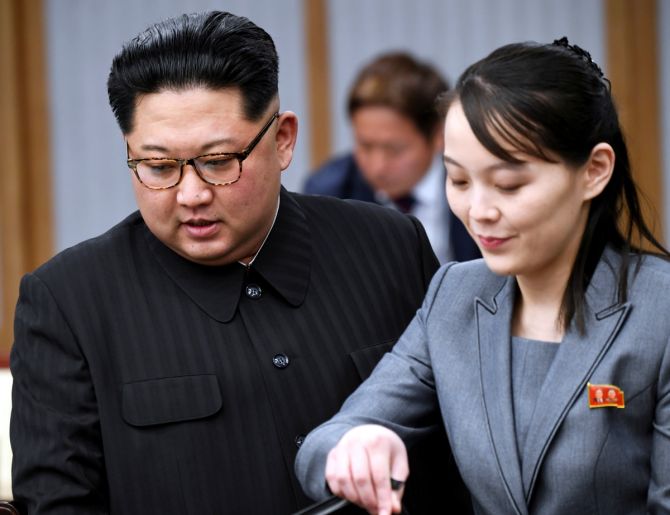 IMAGE: Kim Jong Un and his sister Kim Yo Jong attend a meeting with South Korean President Moon Jae-in at the Peace House at the truce village of Panmunjom inside the demilitarised zone separating the two Koreas, April 27, 2018. Photograph: Korea Summit Press Pool/Pool via Reuters

The status of Kim Yo Jong, Kim's influential younger sister, became a much debatable topic as her status was demoted.

It raised questions over whether it signalled any change in her status in the top echelons of power. She was not listed as a member nor as an alternate member of the party's politburo.

She was virtually the de facto No 2 leader steering overall state affairs and was expected to get a higher position in the party hierarchy. But it is premature to determine Kim Yo- Jong's future role given that she is a member of the North's 'royal' family and allowed by her brother to exercise greater influence in State affairs, including her hardline stance against South Korea and the United States.

It was she who ordered the blowing up an inter-Korean liaison office in June 2020 in anger over the leaflet campaign by South Korean activists and accompanied her brother on all his important international engagements.

She accompanied her brother at three inter-Korean summits, including the historic summit talks at the inter-Korean border village of Panmunjom in April 2018.

It could be a strategic ploy on Kim's part to keep his sister away from the limelight. She could be brought back with responsibilities at an opportune time.

It was she who led the North Korean delegation to Seoul at the February 2018 Winter Olympics at Pyeongchang and shook hands with South Korean President Moon Jae-in.

When rumour surfaced about her brother's absence from public view for some time in 2020 on health grounds, she was speculated to take over if her brother was incapacitated or died.

Kim Jong Un's children are young and cannot be groomed now as his successors, which is why Kim must have kept in mind to groom his sister to maintain the royal blood on the regime.

Whenever the leader decides, he can always create a new position for his sister, elevate her status and delegate authority to decide matters.

She is a 'confidant and image consultant for her brother as well as a trusted pair of eyes and ears embedded in the North Korean elite.'

Despite her demotion, she still maintains considerable powers. A day after her demotion she hurled insults at Seoul in scathing State media remarks, calling South Koreans 'top class idiots', presenting herself as the state's foreign policy mouthpiece.

This indicates that she shall assume greater power in the coming months and her influence has not diminished a bit.

As regards Kim's policy towards the United States, the WPK congress did not come out with any specific statement, but there were enough indications that unless he obtains some sanctions relief from the US, Kim would not hesitate to carry out some sort of provocation to put pressure on the Biden administration.

Kim was candid in his assessment when he said that the nature of US policy will not change, implying thereby there is a complete distrust in Pyongyang towards the United States and therefore vowed to bolster ties with 'anti-imperialist, independent forces'.

In pursuance of its previous tested strategy, Kim is likely to test Biden in the same way it greeted Barack Obama just after he became US president in January 2009 by firing off a long-range rocket and conducted a nuclear test soon thereafter.

Similarly, North Korea welcomed Donald Trump with a series of missile tests early in his term. North Korea's weapons are so advanced that any testing at this point would be extremely dangerous and potentially destabilising for the region.

Kim, however, did not rule out diplomacy with the Biden administration despite that Pyongyang called Biden a 'rabid dog' after Biden labelled Kim a 'thug'.

Biden could be willing to engage in 'principled diplomacy' if that could help make progress towards North Korea's denuclearisation.

Similarly, Kim shall test if South Korean President Moon Jae-in continues to maintain his 'strategic patience' in continuing to seek peace with the North.

Since Moon's tenure ends in 2022, Kim would probably not unnecessarily precipitate hostility towards South Korea.

By making threatening statements periodically, as his sister did a day after the KWP congress ended, Kim would eye extracting economic aids from the South.

In August 2020, the KWP's central committee admitted that plans to improve the economy had been 'seriously delayed' by 'severe internal and external situations'.

For the past few months, Kim has spent considerable time in image building and project himself as a 'man of the people'.

There were reports that during the KWP congress Kim admitted failure. That is unlikely to be true.

Kim most probably acknowledged that the results were not sufficient. This was interpreted as Kim's admission of failure.

Irrespective of the controversy, the fact remains that the country's economy is in very bad shape.

Heavy investment in weapons development despite crippling sanctions, closing the border being forced by the spread of coronavirus, a spate of recent natural disasters and others have left the country's economy in shambles.

This prompted Kim to admit that his economic strategy that he unveiled at his first congress in 2016 'fell extremely short' of its goals.

North Korea's economy is in worse shape today than when Kim took over after his father's death in December 2011.

The economic situation sharply deteriorated after the border was closed and this cut off much-needed Chinese trade and aid to the country.

In the past, North Korea has received various economic incentives in return for its denuclearsation. But for Pyongyang, money does not get a priority as its primordial goal is to weaken the US-South Korea alliance relationship and get American troops off the Korean peninsula.

Kim also comes under pressure from North Korean hardliners who see aid and economic cooperation less of an opportunity than a risk to the regime's stability.

Kim is most likely to draw a lesson from the bungled negotiations in Hanoi in February 2019 and therefore continue his strategy to strengthen his arsenal so that he would be in a better position for any future nuclear negotiations. That would be a scary scenario for North Korea's perceived enemies.

The comprehensive report released by the WPK's central committee on the country's future plans demonstrates that Pyongyang shall never waiver from its goals of making major investments in its nuclear, missile and conventional weapons programmes in the years ahead.

Kim would also put more weight in cultivating relations with traditional partners like China and Russia rather than seek peace with the US and South Korea.