'The vitriolic campaign now in progress, the underlying threat of violence, and the elevation of Pragya Thakur as a star candidate are key markers in the BJP's obstacle-strewn march back to New Delhi,' says Sunil Sethi.
Illustration: Uttam Ghosh/Rediff.com 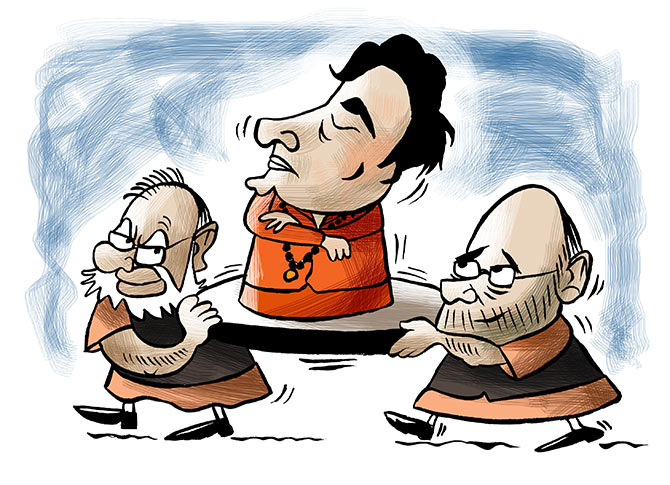 'Vote kisi ko bhi do, kisi tarah wapas to Modi hi aayega' -- 'We can vote for anyone we like, but Modi will somehow manage to come back.'

This pearl of wisdom, dropped with a sigh of resignation, was delivered by Raees, the neighbourhood raddiwallah who comes from a village near Aligarh and who voted on April 18.

For decades, Raees and his family have been collecting the detritus of households -- old newspapers, empty bottles, other discarded junk -- in the locality and have prospered.

From plying their trade on bicycles and pushcarts they have progressed to motorbikes and announce their availability on Whatsapp messages instead of randomly ringing doorbells on Sunday mornings.

Sixteen seats in western Uttar Pradesh voted in the first two phases of the election with a Muslim population of about 26 per cent.

In the Modi wave of 2014 their votes counted for little as the BJP swept the region, partly as a result of Hindu-Muslim polarisation in the wake of the Muzaffarnagar riots the previous year.

This time it's different. The SP-BSP alliance forged by Akhilesh Yadav and Mayawati -- with a 42 per cent vote share, neck and neck with the BJP's 43 per cent -- is a powerful alternative power centre with the Congress cutting in for third position in the crucial Gangetic heartland.

The BJP's supremacy -- it won 71 of 80 seats in the state -- is seriously challenged. This has resulted in a campaign to intensify the Hindu-Muslim divide peaking after five years of the BJP's majoritarian politics.

The Election Commission, at the prodding of the Supreme Court, which called it 'toothless', has had to impose campaign suspensions against Ajay Singh Bisht aka Yogi Adityanath and Maneka Gandhi for their hate speeches against Muslims, all of a piece with the Narendra Damodardas Modi-Amit Anilchandra Shah duo's insinuations against the community as anti-national, pro-Pakistan 'infiltrators'.

Equally, it has had to restrain leaders across the political spectrum -- Mayawati, Azam Khan and Rahul Gandhi -- for poisonous personal attacks and wild assertions.

The most squalid slurs, for instance, references to Jaya Prada's 'khaki underwear' or forcing Mayawati 'clean officials' shoes' have emanated from the SP's Azam Khan. And some of the most fatuous, such as attributing the Modi-is-a-thief label to the Supreme Court, or lumping 'all Modis (Narendra Modi, Nirav Modi and Lalit Modi) are thieves' are examples of Rahul-speak.

The high-pitched BJP narrative of demonising Muslims everywhere is now countered with the spectre of 'saffron terror', a phrase attributed to Congress leaders such as P Chidambaram and Digvijaya Singh.

This phantom has now come to haunt them in flesh and blood, in the form of Pragya Thakur Singh, an accused terrorist and criminal conspirator fielded by the BJP in Bhopal against Digvijaya Singh.

The BJP has held the seat since 1989 so a contest was not so much an issue as polarising Hindu votes in Madhya Pradesh where it fears reduced numbers as in UP.

The tremors of the BJP's divisive campaign are felt far and wide: In Bengal, Assam and border north east states where citizenship for Bangladeshi Muslim migrants is an emotive issue, now presented in the guise of righteous Hindu nationalism.

In Begusarai in Bihar, where the former student leader and anti-BJP campaigner Kanhaiya Kumar is a prominent candidate for the Communist Party of India, sections of the youth express admiration for him. But as a lengthy on-the-ground report in the news portal Scroll.in suggested that may not be enough.

A jobless graduate Sanjit Kumar, like hundreds of his ilk eking out a livelihood, is quoted as saying: 'Since we did not get jobs, we can't say achche din have come. But keeping aside our selfish needs, this much we recognise: The country has become strong under Modiji. The army's morale has been raised. If the country is safe, everything is fine, it doesn't matter whether we get jobs or not. Just as Kanhaiya Kumar had made Begusarai proud, Modi had made India proud.'

The quote succinctly encapsulates the shift in the BJP's vote-capturing strategy in 2019. Long-evaporated assurances of 'Acche din' and 'Sabka saath sabka vikas' are replaced with the over-riding images of a 'Supreme Leader' and 'Resurgent India' after Pulwama-Balakote, necessary to tame enemies, external and internal, such as Pakistan and disloyal minorities.

The idea is backed by sufficient academic analysis to show that the BJP's rhetoric spirals at election time in states where it faces a major erosion of its electoral base.

Since late 2017, starting with a bruising election in his home state Gujarat, the Modi magic has waned all through 2018. It has won just three out of 13 parliamentary by-elections, and managed to retain power in only five of 22 state legislatures.

The vitriolic campaign now in progress, the underlying threat of violence, and the elevation of Pragya Thakur as a star candidate are key markers in the BJP's obstacle-strewn march back to New Delhi.

Our local kabadiwallah is not far wrong in his assessment.