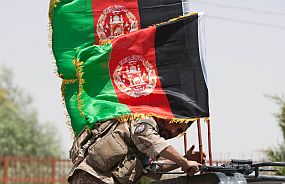 Last week, the counter-terrorism dialogue between China and India finally took a serious turn as the two sides discussed the issue of Afghanistan for the first time. The impending departure of Western forces from Afghanistan and the spectre of looming chaos seem to have persuaded Beijing that it cannot ignore the Af-Pak challenge forever. The two sides have now decided to initiate a dialogue on Afghanistan -- which was certainly long overdue.

The Sino-Indian counter-terrorism dialogue has been on since 2002, and was widely viewed as a major bilateral initiative when it started on the assumption that the threat of terrorism was a major national security challenge facing both New Delhi and Beijing. But these hopes were quickly laid to rest as nothing of consequence emerged from these dialogues.

The reason is not difficult to decipher. For India, the main source of terrorism is Pakistan, where the State machinery has continued to view terrorism as a legitimate tool of national policy to further their interests vis-à-vis India. For China, Pakistan is an important asset in its South Asia policy and an ‘all-weather’ friend. As a consequence, where New Delhi had, somewhat audaciously, expected to make common cause with Beijing against Islamabad and Rawalpindi, there was only disappointment at the outcome of these dialogues.

But as concerns are rising in the region about the consequences of the withdrawal of Nato forces from Afghanistan next year, China is showing some nascent interest in coordinating with India on this issue. There is a clear convergence between China and India as both States have made major investments in Afghanistan since 2002.

The impact of Afghanistan’s destabilisation will be felt not only in Kashmir, but also in Xinjiang, where the East Turkistan Islamic Movement is leading a separatist struggle. China has also indicated that it is not sure if Pakistan’s security establishment actually continues to have control over the Taliban and other extremist groups in the context of the rapidly deteriorating security situation in Pakistan.

China and India both have reiterated that a regional approach is necessary in order to maintain peace and stability in Afghanistan after the departure of Western forces next year. According to some reports, the two sides have agreed to support the Shanghai Cooperation Organisation to play a greater role in Afghanistan, and discuss anti-terror cooperation within the framework of the Istanbul Process agreed upon in 2011. Towards that end, trilateral consultations between China, India and Russia were recently held in Moscow and in order to maintain regional balance were followed by China-Russia-Pakistan discussions in Beijing.

Though it is indeed encouraging that finally Beijing is recognising the need to work with India on Afghanistan, there is a tendency in sections of the Indian policy establishment to get hyperbolic every time China makes even a perfunctory gesture towards India. The stakes in Afghanistan are so high that New Delhi will have to extremely cautious as it moves forward with its dialogue with Beijing.

Since 2001, China had adopted a hands-off policy towards Afghanistan, preferring the US to do most of the heavy lifting. It did not want a serious involvement in Afghanistan; but it also did not want a victory for the extremists, given its negative impact on China’s problems with Uighur separatists in Xinjiang. Apart from the $3 billion Aynak copper-mine project, China also did not make a significant attempt to project its economic power in Afghanistan.

But as the departure of Western forces from Afghanistan approaches, China has upped its game. It was in 2007 that the State-owned China Metallurgical Group Corporation secured a 30-year lease on MesAynak in Afghanistan’s Logar province. Though progress has been slow and Afghan insurgents have targeted the mine, Beijing is expecting to extract $100 billion worth of copper from the site. The China National Petroleum Corporation has also helped Afghanistan in setting up the country’s first commercial oil production site which is likely to extract 1.5 million barrels of oil annually from 2013.

China’s humongous appetite for resources will make sure that Afghanistan, with over one trillion dollars in potential mineral wealth, gets adequate attention from Beijing. With China’s backing, Afghanistan became an observer in the SCO and China has signed a strategic partnership agreement with Kabul. More significantly, Beijing has access to the Taliban through Pakistan, having been the only non-Islamic nation in touch with Mullah Omar in the late 1990s.

It is true that the deteriorating internal security situation in Pakistan has strained Sino-Pakistan ties in recent years to some degree. China Kingho Group, one of China’s largest private coal mining companies, pulled out of what was to be Pakistan’s largest foreign investment pact, citing concerns for the security of its personnel. Amid worries about the potential destabilising influence of Pakistani militants on China’s Muslim minority in Xinjiang, Beijing has also taken a harder line against Pakistan.

The flow of arms and terrorists from across the border in Pakistan remains a major headache for Chinese authorities, and Islamabad’s inability and/or failure to curb extremism makes it difficult for the Chinese to trust Pakistan completely. But it is equally the case that China, at least publicly, has continued to emphasise that its relationship with Pakistan is far more important than isolated incidents of violence.

In this context, New Delhi should not expect that Beijing will change its Afghanistan policy significantly to suit Indian interests. The road to stability in Kabul lies through Rawalpindi and China has few incentives to challenge the Pakistan security establishment’s traditional adversarial mind-set vis-à-vis India that continues to look at Afghanistan for some chimerical ‘strategic depth’.

In the end, India will have to face the challenge all alone, notwithstanding some positive signals emanating from China.

The writer is at King’s College, London