News
Business
Movies
Sports
Cricket
Get Ahead
Money Tips
Shopping
Sign in  |  Create a Rediffmail account
Rediff.com  » News » What is the Nagaland governor up to?

By writing a scathing letter to Chief Minister Neiphiu Rio on the breakdown in law and order in the state, is Governor R N Ravi creating the ground for consolidating his power and directly influence proceedings in the state, asks Sandeep Pandey. 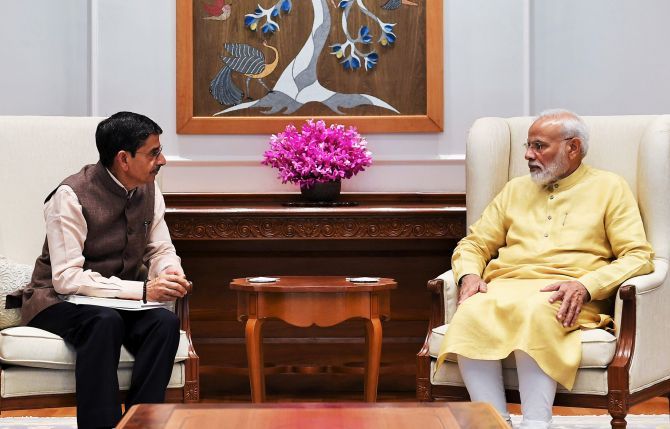 Ravi has revealed that some of these groups are running their 'governments,' illegally levying taxes on items from salt to construction material.

The governor stated that government accommodation in forest areas have been taken over by some such groups which are involved in illegal felling of trees and encroachment of forest areas in contravention of a Supreme Court order of 2001.

He goes on to say that offenders apprehended under the Indian Arms Act, Explosive Substance Act and Nagaland Security Regulations which carry punishment for five years get away easily because of collusion of public prosecutors with the accused, making a mockery of law and order.

Ravi has just made public what is well known about the north east --that a variety of groups extort money from government employees, too.

As the interlocutor on behalf of the Government of India, Ravi signed -- in Prime Minister Narendra Damodardas Modi's presence -- on August 3, 2015, a framework agreement with leaders of the National Socialist Council of Nagalim (Isak-Muivah), the most prominent insurgent group in Nagaland, the leader of which Thuingaleng Muivah is described as 'Ato Kilonser' (translated as prime minister).

The agreement itself has phrases like 'shared soverignty,' 'peaceful co-existence,' and 'inclusive relationship,' implying some scope for autonomy was visualised for the Naga people.

So, Ravi could not have been unaware of the situation in Nagaland before he took over as governor.

When the talks with the NSCN-IM got stuck over the demand of a separate constitution and flag for Nagaland, Ravi engaged other groups in Nagaland, possibly including some of those who he describes as 'gangs,' to try to find a way forward to clinch the peace accord.

Ravi became Nagaland governor on August 1, 2019, with a mandate to conclude the agreement within three months, but there has been no word from him or the Government of India after the deadline passed.

The Naga peace process, which has been going on for 23 years after the 1997 ceasefire, appear to have once again entered a limbo.

The purpose of Ravi writing such a sensitive letter to the CM, which made it to the public domain, is unclear.

It is either an expression of frustation with multiple local forces, including the elected government, realising that the situation is beyond redemption.

Else, it could be a pre-emptive attempt to abdicate responsibility, especially if some untoward incident happens.

As a third possibility, he may be creating the ground for consolidating his power vis-a-vis the elected government, wanting to directly influence the proceedings in the state as he indicates towards the end of the letter.

It is instructive to note that Bharat Gandhi, the leader of a small political party from mainland India, Voters International Party, with a small presence in Assam, is currently in jail in Nagaland.

He was arrested at a meeting of his party in Dimapur on March 13 this year. Even though he secured bail on May 11, before he could be released, two of his colleagues were kidnapped by an armed group and a ransom of Rs 1 crore was demanded.

Bharat Gandhi is now lodged in the Mon district jail because of another First Information Report filed against him and awaits grant of bail. Indian civil society activists have demanded his safe exit from Nagaland.

One cannot help but draw parallels with the social activist Sanjay Ghose's disappearance forever in 1997 from Majuli island in Assam. Sanjay is believed to have been killed by the United Liberation Front of Asom.

When Irom Sharmila went on a fast for the repeal of the Armed Forces Special Powers Act for 16 years, people in mainland India and the rest of the world became aware about the human rights violations in Manipur in particular and the north east in general.

Governor Ravi's letter is an admission of this reality.

In a way it is surprising that the governor has admitted the failure of the government, something which is anathema to the current ruling dispensation in New Delhi.

If Ravi's honest admission of the reality can set in motion a process of introspection by the government and the reining in of rampant extortion and violence so that some order is brought in the state, it would serve a purpose.

That the ceasefire has been extended so long is a reflection of the will of the Naga people that they want peace.

Most Nagas have given up the hope of complete autonomy in lieu of 'shared soverignty' and 'peaceful co-existence' within the Indian set-up. It is the failure of successive Indian governments to bring normalcy to the area.

But Ravi's disciplinarian approach may not work because the Nagas don't consider themselves to have subordinated to the Indian State in their history.

The Nagas never signed any instrument of accession with India and claim to have a unique history.

Hence, any peace solution, if it has to last, has to be arrived at with the consensus of all or most of the Naga groups including the most powerful, the NSCN-IM.

The Nagas want to have a unique system of governance, competencies of which have been worked out in great detail by the NSCN-IM.

The Government of India, through the office of Governor Ravi, would do well to start building a consensus around that instead of trying to exploit the differences among various insurgent groups.

Sandeep Pandey, winner of the Magsaysay Award, in 2002, is vice-president of the Socialist Party (India).