'India needs to be cautious that its differences with Pakistan do not obstruct SCO's functioning,' says Sana Hashmi. 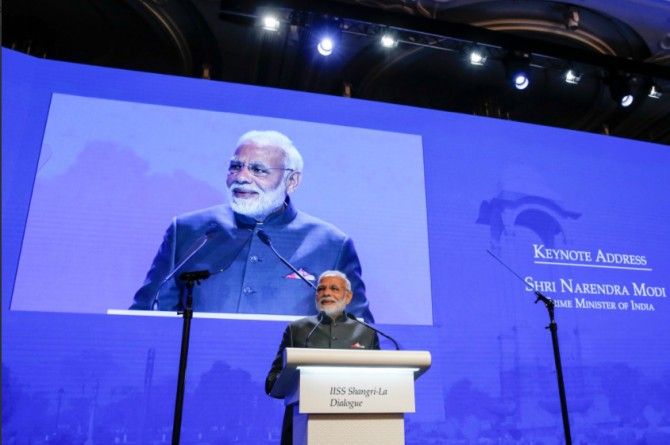 IMAGE: Prime Minister Narendra Modi D addresses the Shangri-La Dialogue in Singapore on June 2, 2018, the first Indian PM to do so. Photograph: @MEAIndia on Twitter

When leaders of the Shanghai Cooperation Organisation meet in Qingdao on June 9-10 for the 18th summit, they will be welcoming the newest members of the grouping, India and Pakistan.

India along with Pakistan was accepted as a full member of the organisation in the last SCO summit in June 2017, and this will be the first summit of the expanded grouping.

This summit has gathered attention as it is taking place in the aftermath of Prime Minister Narendra D Modi's informal summits with Chinese President Xi Jinping in Wuhan in April and Russian President Vladimir Putin in Sochi in May.

His speech at the Shangri-La Dialogue in Singapore last week mentioned India's growing partnership with Russia and its multi-faceted/layered relations with China.

'India's strategic partnership with Russia has matured to be special and privileged. As far as China is concerned, among other things, Prime Minister Modi stated, 'Asia and the world will have a better future when India and China work together in trust and confidence, sensitive to each other's interests.'

With its recent engagements with Russia, China and Association of Southeast Asian Nations, it is obvious that India is poised to play a larger role in the regional context.

Prime Minister Modi's participation in SCO may be seen in this light as India stands to gain from its membership in the grouping.

First, Prime Minister Modi has attempted to reach out to Central Asian countries after visiting them in July 2015.

While India's Act East Policy has been a huge success, its Connect Central Asia Policy has never taken off in entirety. It was drafted during the first India-Central Asia Dialogue in June 2012, but has remained dormant till now.

One of India's purposes in SCO will be to revive its Connect Central Asia policy and to find new ways to engage the region. SCO gives a platform to India to directly engage these countries.

Second, when the Shanghai Five was expanded to become the Shanghai Cooperation Organisation, one of the goals of the grouping was to fight three evils: Separatism, terrorism and extremism.

In fact, there is a sub-grouping under SCO, the Regional Anti-Terrorist Structure that is headquartered in Tashkent to strengthen collective counter-terrorism measures. This will help India in raising its concerns on regional terrorism.

Third, the SCO consists of just eight members while other groupings that India is a member have many.

For example, the East Asia Summit has 18 members and the ASEAN Regional Forum has 27 members.

Thus, SCO is an exclusive grouping with a focused mandate. It is unlikely that it will end up becoming a talk shop given it has members such as Russia, China and India.

Fourth, inclusion in the SCO also means more avenues to cooperate with Russia and China.

While India and Russia have had cordial relations, India and China had to deal with several issues in the recent past. The 73-day long Doklam standoff was a huge setback in their relations.

The SCO will give member countries a platform to resolve issues and engage in a constructive dialogue.

However, it will not be all easy going for India in SCO, given it has to deal with a few challenges in the grouping.

First, there is no doubt that China will use the SCO to promote One Belt, One Road and, in all probability, the Chinese side will be pushing countries to include support for OBOR in the joint statement.

This could be awkward for India as all other members are supportive of OBOR.

During the SCO Council of Foreign Ministers meeting on April 24, the press release mentioned: 'The foreign ministers of Kazakhstan, Kyrgyzstan, Pakistan, Russia, Tajikistan and Uzbekistan reaffirmed their support for China's Belt and Road initiative and called for using the capabilities of regional states, international organisations and multilateral bodies to build a broad, inclusive, mutually beneficial and equal partnership within the SCO.'

Due to India's reservations on the China-Pakistan Economic Corridor, one of the land corridors under OBOR, India has not yet extended its support to the initiative.

Second, China and Russia have already exercised their influence in the Central Asian region where these two are considered as formidable powers. To what extent India will be accepted and welcomed in the region remains to be seen.

Third, India needs to be cautious that its differences with Pakistan do not obstruct the grouping's functioning.

This is going to be a real test for India given that SAARC (the South Asian Association for Regional Cooperation) is a non-starter for exactly this reason.

In the light of such challenges, it is highly recommended that India's priorities in SCO be focused and that it not let its differences cause disruptions.

Additionally, India's inclusion is not only beneficial to it, but will also bring diversity and stability to regional dynamics.

Sana Hashmi, a regular commentator on Chinese foreign policy, is the author of China's Approach towards Territorial Disputes: Lessons and Prospects.