China will flood direct flights to India with wholesale takeaways of the authentic stuff; Indian businessmen will fight for the commission and the consumers for the cuisine, predicts Sunanda K Datta-Ray. 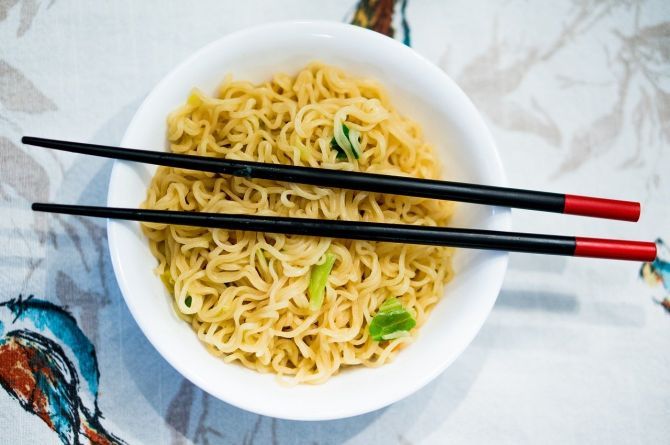 The Son of Heaven had taken great trouble arranging a surprise party on June 15 on those bleak heights where not a blade of grass grows although tanks roll, artillery crackles and shells explode.

His silence was especially surprising because, like all Indians, Modi loves bragging about foreign VIPs.

'Barack' and 'Bibi' trip off his tongue.

But perhaps the Middle Kingdom's president-for-life and supreme commander isn't foreign or VIP enough for someone who counts Trump and Netanyahu (the fond 'Bibi') as buddies.

Xi's handling of the coronavirus pandemic probably injected new meaning into Mao Zedong's boast that the Chinese alone would survive a nuclear holocaust but however Celestial or Imperial, he is still only Asian.

Trump and Bibi are sahibs, not pukka of course, but who can tell?

Certainly not Amit Shah who boasts that the US and Israel defend their borders like India.

As home -- not foreign -- minister, he is innocent of Pax Britannica or the Monroe Doctrine.

Aksai Chin and the McMahon Line are outside his jurisdiction.

So is the Indian's Aryan obsession.

When one demanded American citizenship on race grounds, the US court held Aryan he might be, White he wasn't.

Clearly, China's then president Liu Shaoqi was modest in affirming that as 'a great power', China "had to punish India once".

Once is not enough, especially if they are so remiss about the Son of Heaven's dues.

Reluctant to pull rank, Xi has swung in a cane chair in Ahmedabad, squatted on the ground beside an antediluvian spinning wheel in Sabarmati, and politely admired Modi's sarong and angavastram at Mamallapuram.

At the same time, the iron fist ordered People's Liberation Army troops to Ladakh just in case his hosts thought he was all velvet glove.

They should have known he meant business when Xu Qiliang, who crushed the Tibetan uprising and massacred Tiananmen Square protesters, was appointed chief of the Western Theatre Command.

But as always, they were napping.

China drove a highway through Aksai Chin while Indians slumbered.

Local shepherds had to nudge them awake when Kargil was swarming with Pakistani infiltrators disguised as herdsmen.

Indians hadn't a clue about the Chinese road between two spurs on Lake Pangong that unilaterally shifted the LAC in China's favour.

The ultra-nationalists didn't even hear Shyam Saran's warning that 'deception is an integral element of Chinese strategic culture'.

Beguiled by tales off a 56-inch (or millimetre?) chest, they were cock-a-hoop that Beijing had accepted Sikkim's annexation until China claimed the Finger Area tract just to put them wise.

Not that anyone was much wiser.

Brajesh Mishra didn't know whether Mao smiled at him or merely beamed good-naturedly which seemed unbecoming to any highly-placed Indian.

Kamaraj was similarly bewildered when a Chinese visitor resisted his garland.

Instead of 'Pakkalam' (Let's wait and see), his favourite tactic, the burly Tamil forced the garland over the reluctant Chinese head.

The man had just done the same to him.

'Not the same man'" murmured K Natwar Singh. Then vice-minister Chen Chen Tho, the delegation leader, had garlanded Kamaraj who, in turn, insisted on garlanding Chen's interpreter.

One Chinese looked the same as another.

That's why Zhou Enlai, who thought two centuries were not long enough to decide whether the French Revolution had made an impact, recognised Nehru in a jiffy as the most arrogant man on earth.

Since Modi isn't a sahib like Nehru, China welcomed him when Europe and the US wouldn't.

He greeted Xi on Weibo, the Chinese Twitter, in deferential Mandarin even when China had to be stern about the Nuclear Suppliers Group and Doklam.

But they are all coconuts (brown outside, white inside) or wannabe coconuts.

Like that India-loving banana, Lee Kuan Yew, who refused Hua Guo Feng's gift of Neville Maxwell's book on the 1962 War.

Taking his cue from the Doordarshan broadcaster who thinks 'X' and 'I' are Roman numerals, Modi may now dismiss Xi as 'Eleven'.

But Xi wants him to go ahead with banning Chinese restaurants.

China will then flood direct flights from Kunming to Ahmedabad, Chennai, Delhi, Jaipur, Kolkata, Mumbai and Trivandrum with wholesale takeaways of the authentic stuff.

No matter how grim the news from Ladakh, Indian businessmen will fight for the commission and Indian consumers for the cuisine.

Xi's will be the last laugh as India's trade deficit soars far above today's $53.6 billion.