'She dwarfs every known politician of recent times with her imperious aura, iron will, tremendous drive, dauntless pursuit of goals she set before herself, ability to capture the people's imagination and unshakeable grip over her party and government,' says B S Raghavan, the distinguished civil servant. 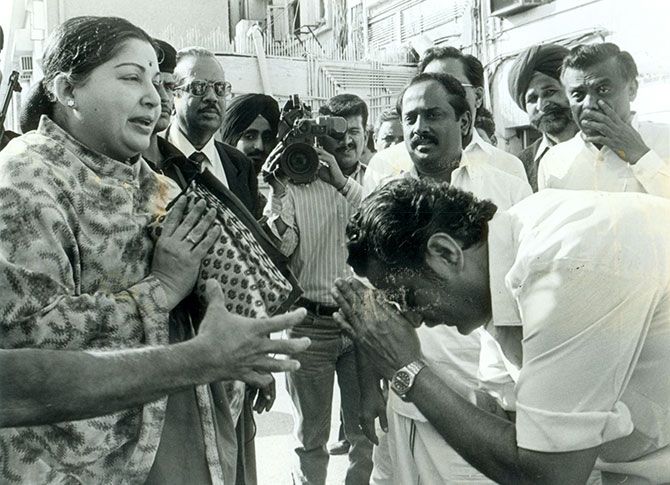 IMAGE: 'She was a fitting case study of one who overcame the formidable odds stacked against her as a Brahmin leading a Dravidian party and as a woman in a society in which gender prejudice was rampant and managed to rout the rivals ranged against her,' sdays B S Raghavan.

Death lays his icy hand on kings. He has laid it on Jayalalithaa, proving that 'the glories of our blood and State are shadows, not substantial things; there is no armour against Fate.'

What counts is what one leaves behind, and what Jayalalithaa has left behind is a monumental political legacy which has no parallel, certainly in the modern history of Tamil Nadu, and perhaps on the national stage as well, barring colossuses of the calibre of Mahatma Gandhi, Jawaharlal Nehru, Sardar Vallabhbhai Patel and Indira Gandhi.

She dwarfs every known politician of recent times with her imperious aura, iron will, tremendous drive, dauntless pursuit of goals she set before herself, ability to capture the people's imagination by launching innovative schemes, and unshakeable grip over her party and the levers of government -- the cumulative effect of all of which, accentuated by a sharp mind, clear vision, superlative intelligence and power of communication with Churchillian flavour, gave her a stature surpassing that of most leading lights in national politics.

Indeed, I have often wondered to what heights she would have taken India if only she ran the government at the Centre.

My observation during my long association with the central and state governments is that most politicians turn out to be poor administrators. This could be, and has been, said of even Jawaharlal Nehru.

In the light of my experience of the working of the DMK and AIADMK governments, in Tamil Nadu in the period of 30 years after retirement, I can say with reasonable conviction that Jayalalithaa has no peer, other than Dr B C Roy and Jyoti Basu, and to a certain extent Indira Gandhi, in her mastery of the art and science of administration and in the effective exercise of power and authority for common good.

Once she laid down the law, there was none to say nay.

She demanded and got unquestioned obedience to her orders from her ministers and bureaucrats. Those who have worked with her tell me that she listened attentively and in full to the points made by them during discussions and went carefully through the notes and correspondence in files.

Because of her instant grasp of the kernel of an issue, her directions were precise, clear and crisp, without any need to second guess them.

There are many instances I can cite, but four stand out. The most spectacular of them all was the way she dealt with the state-wide strike of 1.3 million government employees in 2003.

By passing an ordinance invoking the Essential Services Maintenance Act and exercising the full plenitude of powers of the government, she got all the union leaders and their supporters detained and 170,000 employees dismissed overnight, and had them literally prostrating before her and begging for mercy.

The only other instance of such a determined action in the recent annals of administration is that of the British prime minister Margaret Thatcher, rightly known as the Iron Lady, who crushed the National Union of Mineworkers led by a supposedly invincible trade union czar, Arthur Scargill, in 1985 by a similar display of ruthlessness.

Jayalalithaa even got plaudits from the Supreme Court for teaching the government employees who were 'holding people to ransom' a lesson which they have not forgotten till today.

The second was the improvement she brought about in the power sector by close monitoring and firm insistence on timely completion of projects.

As the first power commissioner of West Bengal and chief executive of the Damodar Valley Corporation and the West Bengal Power Development Corporation and as a former member of the Union government's Expert Group on Energy, I have nothing but admiration for the turnaround in power generation and distribution that has occurred in Tamil Nadu.

I was further deeply impressed when, during her second spell in 2011 as chief minister, she brought out a Vision Document 2025 which, at her instance, gave special importance to the exploitation of renewable energy sources such as solar power and wind energy.

This stemmed from her realisation that the future of humankind was bound up with renewable and non-conventional sources of energy and not with fossil fuels.

The third was her putting her weight behind the completion of the New Veeranam Project for drinking water supply to Chennai. This project, started during the earlier DMK regime was ensnarled in various scams and delays, but she successfully got it going, thereby ensuring steady availability of water to the city.

And the fourth was her steadfast commitment to make Tamil Nadu a new growth model and Number One among the Indian states in all spheres of development and not to spare any efforts to remove the roadblocks such as infrastructure deficits standing in the way of flow of investments to the State.

Tamil Nadu has emerged as the automobile hub of India largely due to her tenacity of purpose.

Of course, she had her flaws. She was unapproachable, even for those whom she knew from her cinematic days.

She extracted fealty in the manner of an unforgiving feudal overlord.

She went all out to bring to heel her political adversaries whom she regarded as enemies.

More than all, observers of the Tamil Nadu political scene found her weakness for what was widely put out as the 'Mannargudi' group an unsolvable riddle, for in the people's estimation, it was largely that group that was instrumental in blackening her reputation.

As against this, she was a fitting case study of one who overcame the formidable odds stacked against her as a Brahmin leading a Dravidian party and as a woman in a society in which gender prejudice was rampant and managed to rout the rivals ranged against her.

The impact on the government and all aspects of governance will be palpable.

The Tamil Nadu bureaucracy is known to be wooden, lethargic and callous. Unless the new chief minister, O Panneerselvam, has unsuspected hidden reserves of grit and dynamism, there is fear of all-round slackening of tempo and weakening of control over service delivery.

To what extent this will be made up by the bureaucracy itself pulling up its socks is a moot question.

The other question uppermost in everybody's mind is: Will the AIADMK survive, or will it splinter with disparate groups gravitating towards other parties, principally the DMK of which the AIADMK was an offshoot?

It should be no surprise at all if those parties, taking advantage of the fact that most AIADMK leaders are non-entities and count for little in her absence, set in motion, initially wilily, and over time, openly, a calibrated process of blandishments and quid pro quos, so that, like the Cheshire cat, the AIADMK vanishes, and not even a grin remains.

B S Raghavan is a former civil servant of the West Bengal IAS cadre, policy adviser to the UN (FAO) and US Congressional Fellow, besides having been director of political and security policy planning in the Union home ministry, member of the Joint Intelligence Committee, and chief secretary of a state.
He also worked with the first three prime ministers as the head of the secretariat of the National Integration Council of which they were the chairpersons.
He was also close to Dr B C Roy and Jyoti Basu, chief ministers of West Bengal.