It would be unwise to predict what will happen two full years from now.
Governments and heroes have lost their popularity in much, much, lesser time.
The numbers, however, look very good for Modi.
We could say it is his election to lose, rather than the Opposition's to win, says Aakar Patel.
Illustration: Dominic Xavier/Rediff.com 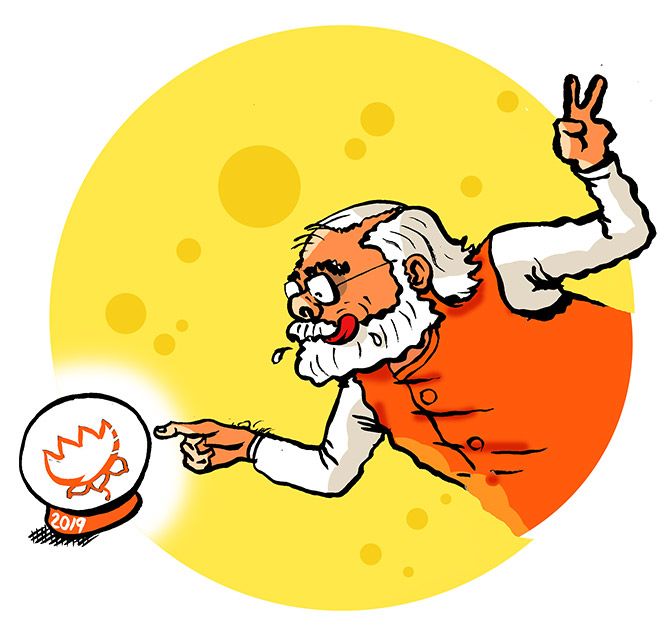 'It is tough to make predictions, especially about the future.' This witty line is attributed to the American baseball player Yogi Berra. His real name incidentally was Lorenzo, but he was nicknamed 'Yogi' because he could sit comfortably cross-legged like Indians.

Let us not be Yogis or mystics and stay away from making a prediction today about the elections of 2019. But we can still have a look at the numbers of 2014, break them down, and analyse what the possibilities for 2019 are.

The Bharatiya Janata Party's recent win in Uttar Pradesh is thought to have made Narendra Modi's return to power in 2019 inevitable.

If this is indeed so, what will need to happen?

Just before counting began in the last election, Modi made a prediction. He said the crowds at his rallies told him that he would get a full majority, something not seen in Indian politics since 1984.

The numbers for Modi came mainly from states in north India. The places where he was particularly dominant were those where the BJP either had sitting governments or had a strong presence.

This sweep of the northern states plus a handful in the northeast took Modi to over 200 seats, the first time such numbers had been delivered in 30 years.

He then only needed to deliver an average performance in the other parts to win. So the simplest path for him would be to do the same thing again.

It will, however, be a challenge for him to duplicate this performance in the north.

In some places like Rajasthan, Madhya Pradesh and Gujarat and possibly Uttar Pradesh, the party may not be able to hold as much ground in 2019 as it currently does.

One cannot improve on perfection, and in Gujarat, Uttarakhand, Rajasthan and Delhi, he has already achieved perfection.

In Gujarat, the BJP faces a revolt from its most loyal voter, the Patidar.

In Rajasthan, there is a competent local leader in Sachin Pilot.

Like in Punjab, which also had competent local leadership, it will be a seat by seat fight.

Fortunately for Modi, there is some space for him to do better in other big states.

Odisha and West Bengal have never seen BJP governments. However, recent local elections show that the BJP has replaced the Congress as the Opposition in Odisha and it has secured a foothold in Bengal.

To some extent, this is because of Modi's overall popularity and it will benefit his candidates in 2019.

Because he has this breathing space in these four states, the five southern states then become much less crucial for Modi. However, here also he is well placed.

In some of these states, the BJP has a good voteshare even in defeat (for example 10% in Kerala). It is placed to become a permanent presence there.

This is in some measure because of the Rashtriya Swayamsevak Sangh karyakarta (whom Modi always congratulates and thanks when he assesses local election victories).

In some measure it is also due to the decay of the Congress, which has lost space in all these states.

Most of us thought Atal Bihari Vajpayee would win a majority in 2004. Indeed, he was himself so confident of victory that he called for elections six months early, only to lose.

And so it would be unwise to predict what will happen two full years from now.

Governments and heroes have lost their popularity in much, much, lesser time.

The numbers, however, look very good for Modi. We could say it is his election to lose, rather than the Opposition's to win.