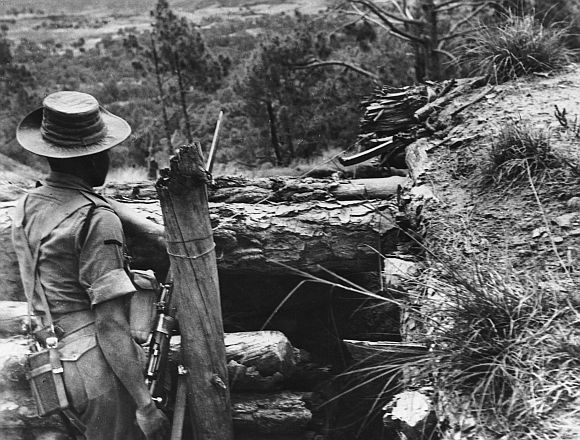 More than half-a-century after humiliation in the 1962 war, India is still not prepared to take on the Chinese dragon.

Every now and then, that dragon flexes its muscles, reminding India the threat persists, says Virendra Kapoor.

Do they ever learn?

Within minutes of the top secret Henderson Brooks report into the 1962 Chinese debacle being posted on a Web site, the government moved fast to block access.

That was foolish. For, neither can the government block access to Neville Maxwell's Web site outside the country nor could it have ensured that in the brief while it was there on the Web some Indian had not already downloaded it.

Besides, nothing prevents one to access the report on the Internet outside the country. Maxwell, the Times, London's correspondent in New Delhi at the time of the India-China war, himself wrote a most critical book, India's China War, which exposed the thorough incompetence of the country's political and military leadership leading up to its worst-ever humiliation.

If Kashmir was Jawaharlal Nehru's unforgivable blunder, the Chinese war was a national disgrace of Himalayan proportions.

The country is still paying the price for those monumental follies. A bit of background. Lieutenant General T B Henderson Brooks, the Corps Commander posted in Jalandhar, Punjab, was tasked to inquire into India's defeat by the then Army Chief General J N Chaudhary who took over after the Chinese war. Another officer, Brigadier Prem S Bhagat, assisted in the inquiry.

Their report was submitted to the defence ministry in April 1963. And since then it has remained top secret, despite shrill demands for its release and the formation of four separate inquiries as to whether the whole or parts of it can be made public.

For half-a-century the excuse for keeping it under wraps has not changed. It is always that its release would demoralise the armed forces. However, Maxwell in his book seemed to have drawn upon the contents of the report.

There is near unanimity, as the title of Maxwell's book suggests, that it was Nehru's ill-conceived 'forward policy' which provoked the Chinese to inflict a crushing defeat on India.

While leaving for a conference in Colombo, Nehru told reporters at the Palam airport that he had ordered the army to clear the Chinese from Indian soil.

No homework, no assessment of the Chinese presence in the North East Frontier Agency (present Arunachal Pradesh), no preparedness of the Indian troops to operate in the mountainous terrain.

Nehru believed that throwing out the Chinese, who had been harassing the Indian border guards for several years by then, was child's play.

His intelligence chief, B N Mullick, and General B M Kaul, chief of the general staff at army headquarters, were the other villains along with V K Krishna Menon, defence minister and a Nehru protege.

The Army Chief, General P N Thapar, was too weak to assert himself before this cabal led by General Kaul, who also boasted a close relationship with Nehru.

These guilty men saw to it that the Henderson Brooks report was never made public. But in spite of it remaining secret, the people at large knew that the Indian solider had been done in by the combined follies of these men.

Nehru, in fact, never recovered from his self- inflicted wound in 1962. His sentimental, even romantic notion of 'Hindi-Chini-Bhai-Bhai' was followed by his emotional outburst, just like a rejected lover's, to teach the Chinese a lesson for betraying his trust, a decision which exposed India's thorough un-readiness to confront the well-prepared and well-supplied Chinese troops.

Nehru had ordered the troops to vacate the Chinese aggression on Mullick's assurance hat the Chinese would not retaliate. Even the foreign office at the time dittoed the Intelligence Bureau chief's assessment.

That should give you an idea of what sort of top officials Nehru had surrounded himself with.

His blind spot for Menon, a man of monumental arrogance and conceit without any connect with ground realities, was his abiding failing.

As was his soft spot for General Kaul who had earned undeserved promotions in the army through his close ties with the prime minister.

If Maxwell has now deemed it fit to lift the veil over the top secret report he can only be commended. More than half-a-century later, India is still not prepared to take on the Chinese dragon.

Every now and then, that dragon flexes its muscles, reminding India that the threat still persists, though our allocation for the defence budget as a proportion of GDP has actually come down.

Half a century after that national humiliation all that we seem capable of is to recite the Kavi Pradeep-Lata Mangeshkar ode to the fallen soldier: Aiy Mere Watan Key Logon...

Image: An Indian soldier stands guard over makeshift forts which have been hastily built in Ladakh during the India-China war in 1962. Photograph: Getty Images