'One can understand this prejudice in the minds of policemen against Muslims, without accepting it. But what tilts the balance disproportionately is the police's blind eye to offences committed in the name of the majority,' says Jyoti Punwani. 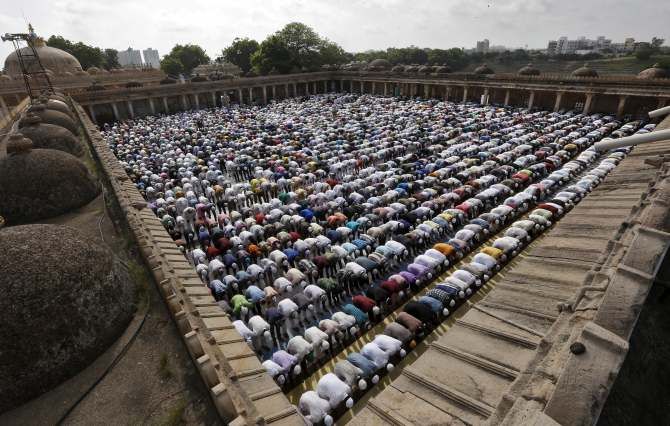 IMAGE: 'While Muslims are seen always as acting as conspirators, at the behest of shadowy 'masterminds,' every act of violence by Hindu bigots is seen as an isolated one, even though it is clear that such acts are instigated or even organised,' says Jyoti Punwani.
This Reuters image is published only for representational purposes.

Is every attack on a policeman a terrorist act? Or only those perpetrated by Muslims?

A Muslim from a village in Yavatmal district who stabbed a constable last month, on Bakri Eid, reportedly uttering the words: 'Tumhari government beef ban karti hai, to yeh lo,' was taken into the custody of the Maharashtra Anti-Terrorist Squad.

The attacker told the police a maulana had instigated him. The ATS was looking for this 'handler' (the maulana), to see if others had been 'radicalised' by him. At the same time, an ATS officer speculated whether this could be a 'lone wolf attack.'

Last month, Hardik Patel, the young man heading the agitation demanding reservation for Patels, advised a Patel boy who had attempted suicide: 'If you have so much in you, better kill two to five policemen. Patels don't die.'

Here was clear evidence of a leader instigating an attack on policemen without any provocation. It took the police two weeks to charge Patel with sedition for this advice.

Though Patel's followers had earlier attacked policemen, no terror charge was invoked against him, and rightly so. Neither Patel, nor the Yavatmal youth, had committed a terrorist act in targeting policemen. Yet, the latter was taken into custody by the ATS.

That's not new. In the Gujarat violence of 2002, the Muslims accused of burning Coach S-6 of the Sabarmati Express, had POTA (the Prevention of Terrorism Act) applied to them. But the Hindus who attacked Muslims across the state after Godhra, were arrested and tried under normal Indian Penal Code charges.

Why is it that every offence by Muslims smells of a conspiracy to the police?

The then police commissioner of Mumbai, S K Bapat, told the Srikrishna Commission of inquiry into the post-Babri Masjid demolition riots of 1992-93, that whenever Muslims took to the streets, Pakistan's ISI was behind them, even if they didn't know it themselves!

Is that the perception of all policemen?

One can understand this prejudice in the minds of policemen against Muslims, without accepting it. In most countries, the police do target minorities. But what tilts the balance disproportionately is the police's blind eye to offences committed in the name of the majority.

While Muslims are seen always as acting as conspirators, at the behest of shadowy 'masterminds,' every act of violence by Hindu bigots is seen as an isolated one, even though it is clear that such acts are instigated or even organised.

In the Mumbai riots, policemen refused to link acts of violence by Shiv Sainiks to their organisation. The police commissioner, when shown evidence that the first act of violence in Mumbai on December 6, 1992, had been carried out by leading Shiv Sainiks of Dharavi, maintained to the Srikrishna Commission that the case papers only showed that Shiv Sainiks were involved, not the Shiv Sena.

In their affidavits filed before the Srikrishna Commission, both the Shiv Sena and the police ascribed the one-sided anti-Muslim violence in the second phase of the Mumbai riots to a 'Hindu backlash,' a reaction to the Radhabai Chawl incident of January 7, 1993, in which six Hindus were burnt alive by Muslims. But they refused to accept a pattern in this retaliation.

It was left to Justice Srikrishna to work out the pattern and hold Bal Thackeray responsible for the organised violence in January 1993.

Not much has changed in the two decades since 1993. IMAGE: Sajida Saifi, daughter of Akhalaq Saifi, who was lynched by a mob, mourns his death inside her house at Bisara village in Uttar Pradesh, October 2.
'An atmosphere had been created where Thakur youth, who had grown up living peacefully with Muslims, didn't hesitate before killing one of their fellow villagers,' says Jyoti Punwani.
Photograph: Anindito Mukherjee/Reuters

Fairly early after the Dadri attack, newspaper reports revealed that cow-protection groups had been active in the area for long, spreading hatred against beef-eaters. An atmosphere had been created where Thakur youth, who had grown up living peacefully with Muslims, didn't hesitate before killing one of their fellow villagers.

These young men not only believed a rumour spread through WhatsApp that their Muslim neighbour had killed and eaten a cow, but also believed that he had done this as a deliberate provocation to their religious feelings, which needed to be avenged.

To prepare youngsters so that they can act in this manner needs continuous effort. But those who put in this effort, the various local go-rakshan mandals, whose members and leaders have been named by the newspapers, have not been arrested.

The UP police told reporters that they were monitoring the activities of these mandals and would arrest them 'as soon as we get credible evidence.'

Members of these organisations openly told the press their modus operandi, how they would land up on the spot of suspected cow slaughter once locals informed them. Such gatherings are bound to create communal tension. Isn't such vigilantism actionable?

That is not the only evidence that such violence over suspected cow slaughter is organised, or at least instigated through continuous propaganda.

BJP leader Sadhvi Prachi told the media that beef-eaters and cow killers deserve the fate of Mohammed Akhlaq (the man who was lynched in Dadri). In a cover story in the latest issue of the RSS journal Panchjanya, Tufail Chaturvedi writes: 'The Vedas order killing of anyone who slaughters the cow.' 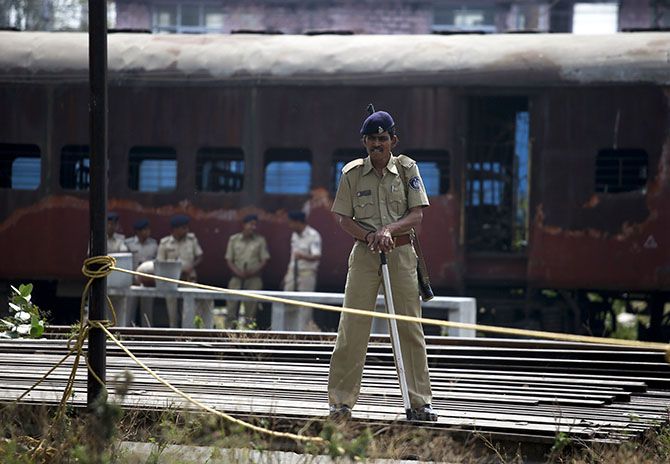 IMAGE: A policeman stands guard near the train carriage that was set on fire in 2002, during the commemoration of the 12th anniversary of the Godhra riots in Gujarat, February 27, 2014. It was one of the country's worst religious riots since Independence, killing some 2,500 people, mainly Muslims.
'In the Gujarat violence of 2002, the Muslims accused of burning Coach S-6 of the Sabarmati Express, had POTA (the Prevention of Terrorism Act) applied to them. But the Hindus who attacked Muslims across the state after Godhra, were arrested and tried under normal Indian Penal Code charges,' says Jyoti Punwani.
Photograph Ahmed Masood/Reuters

What are these statements if not justification of the Dadri killing and instigation to kill other Muslims? Is this not 'credible evidence' worth acting upon?

But we have yet to see action against Sadhvi Prachi, Tufail Chaturvedi and Panchjanya Editor Hitesh Shankar.

When Hindutva goons stripped and thrashed a Muslim in Mangalore in August for sitting next to a Hindu colleague in a car, the police arrested 13 youth, some of whom belonged to the Bajrang Dal. Members of the Dal had indulged in similar violence earlier this year in Mangalore. Was the Mangalore and/or Karnataka Bajrang Dal leader arrested or even questioned? Shouldn't he have been seen as a 'handler,' just like the maulana in the Yavatmal case, and hadn't he 'radicalised' these youngsters? Or do the cops see 'radicalisation' only as Islamic?

When a Dalit family -- mother, daughter and two sons, one of them handicapped -- was lynched in Khairlanji in 2006, the local police refused to see it as a caste crime. The background to the killing pointed to high caste villagers' anger against the family for getting too assertive.

The prosecution too did not pursue the caste angle, and both the sessions court and high court ignored this aspect altogether. The punishment therefore was much less than it would have been had the Scheduled Caste and Scheduled Tribes (Prevention of Atrocities) Act been invoked.

When Dalits or Muslims are killed, the police see it as a simple crime. No larger angle is explored, even though it is obvious. But when Muslims target cops, it becomes a terrorist conspiracy. When Muslims target Hindutva activists, as they did in Mangalore a few days back, killing Bajrang Dal member Prashant Poojary who had forced the shutdown of an abattoir, police suspect the hand of a 'radical' outfit.

One exception to this must be mentioned: The 2012 Azad Maidan Muslim rally in Mumbai, where cops were attacked without provocation by a few Muslim boys outside the Maidan. The incident was handled with restraint by then Mumbai police commissioner Arup Patnaik who restricted police action to the violent boys, not the entire rally. For that he had to pay a price -- he was kicked upstairs and retired unsung.

The message -- by a Congress 'secular' government -- was sent out loud and clear to the police: If Muslims are violent, restraint is not on. To that can be added the police's own motto: If it's a Muslim assailant, he must be a terrorist.

It's easy to blame the Modi government for all the hurts being suffered by Muslims now. But for our police, Muslims, Dalits, Adivasis and organised labour have remained suspect and deserving of the harshest treatment since the last 68 years. It is the secular Congress that has mostly been in power both at the Centre and the states since Independence. Changing the police mindset never occurred to them as a prerequisite of secularism.