Was Tamil poet Thiruvalluvar a Hindu?

At a time Hindu/Hindutva revivalist propaganda has triggered a similar trend in defence of Tamil culture and identity, both inside the country and outside, saffronisation of Thiruvalluvar goes deeper than a political issue and/or gimmick, says N Sathiya Moorthy. 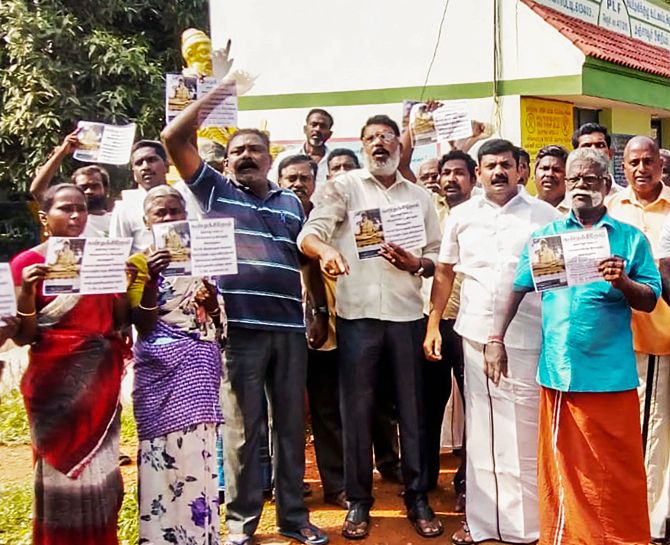 An avoidable controversy has arisen over the religious identity of the ancient Tamil poet-savant Thiruvalluvar.

Coming as it does, ahead of the Supreme Court’s verdict on the larger ‘Ayodhya issue’ with its religious ramifications, the ‘Thiruvalluvar issue’ in ‘Dravidian’ Tamil Nadu requires sensitive handling by the governments and ruling parties at the Centre and the state, if things are not to go out of hand.

The controversy arose after Prime Minister Narendra Modi released the Thai language translation of the saint-poet’s magnum opus at Bangkok, Thailand, and a photograph issued by the Government of India showed Thiruvalluvar in saffron, now identified with the colour of political Hindutva.

What added fuel to the fire was the desecration of a Thiruvalluvar statute at Pillaiyarpatti village in Thanjavur district of Tamil Nadu. Coming as it did after similar desecration of the sttues of Dravidian socio-political ideologue, the late ‘Periyar’ E V Ramaswami Naicker or EVR, through the pre-poll months last year, regional political parties and social groups, starting with Opposition DMK president M K Stalin, blamed it on the PM’s function in Bangkok.

It is anybody’s guess if Hindutva forces that were being alluded to would have hailed Thiruvalluvar as a Hindu without being able to prove his religious identify, and yet desecrate his statue in the same vein. Yet, the damage was done, and the state is returning to near-normalcy after a couple of days of avoidable tension, which has the real potential of overflowing, along with such other ‘pan-Tamil’ socio-political identity issues of the kind, in the future.

Thiruvalluvar, as the author of Thirukkural is known, was believed to have lived over 2,000 years ago, alongside the authors of other great Tamil literary works. The greatness of his work, comprising 1,330 couplets, set to a particular and difficult form of Tamil grammar called ‘Kural’, is divided into 133 chapters of 10 each.

The Thirukkural, prima facie, is seen as not identifying with any religion. Like the Vedas of Hinduism, it talks only about public and private morals, and hence proudly hailed as ‘Tamil Veda’. So much so, there is no reference to god by any name or form in the first chapter, ‘Kadavul Vazhththu’ or ‘Invocation’, and the 10 couplets under the head talk only about the qualities of god, or godliness, so to say.

Time used to be when over the past hundred years plus, the question of Thiruvalluvar’s religion was sought to be raised, addressed, and was allowed to die a natural death. Almost every discourse of the time ended with some kind of a conclusion that Thiruvalluvar, if at all, was a ‘Tamil-Jain’, like many of his contemporary and later-day poet companions. Included in the list were authors of the ‘five major epics’ and ‘five minor epics’ of Tamil, including Silappadikaram, the story Kannagi who is considered the epitome of Tamil womanhood.

So much so, in the previous century, then Tamil Nadu Chief Minister and self-anointed protector of Tamil language and culture, the late M Karunanidhi, had readily agreed to Thiruvalluvar and the rest of them all, including the authors of the greatest of Tamil grammar works, namely, the Tholkappiam and the Nannul, too being Tamil-speaking Jains, as different from later-day immigrant Marwari community, which has taken to the local culture alongside their own native tradition over the last 500-plus years.

The possibility cannot be ruled out. History has it that Jains and Buddhists had dominated the Tamil social structure up to a point. Hindu revivalist stories from the eighth century on, coinciding with the period of Adi Sankara, for instance, talk about Saivite Tamil savants like Thirunavukkarasar talking Pandiya and Pallava kings of the time out of Jainism and back to Saivism/Hinduism, and also after facing the ruler’s wrath in some cases.

Incidentally, even today, there are close to a 100,000 Tamil-speaking Jains in the state (as per Census 2011) with their own places of worship, dating back to a distant past. It is more true that Hindu revivalism in ancient Tamil country, while dating back to the same elsewhere, has a local and localised history, where Tamil language and saint-poets alone played a role --  and an effective role at that.

The period before Hindu revivalism is believed to have witnessed the domination of Jainism and Buddhism. According to 20th century Dalit social reformer and political leader Ayothidasa Pandithar (who later took to Buddhism long before Dr B R Ambedkar), the present-day Adi Dravidar community in northern Tamil Nadu were Buddhist elites, marginalised by Hindu revivalists with the blessings of ‘re-converted’ rulers.

If the story of Kannagi is a part of Tamil literature and belief, folklore has put Thiruvalluvar’s wife, going by the name Vasuki, as another personification of Tamil womanhood, combining devotion and dedication with firmness and fighting spirit.

As the story goes, an angry sage in the mould of Sanskritised Durvasa, who burns a bird with his sheer looks when it interrupts his prayers, does try it on Vasuki, far away from the first scene, and gets back the cool retort: “Kokkentru ninaithanayo konganava?” (‘Did you think that I was also a stork for you to burn me likewise?’).

Even better is the lore of Vasuki letting the bucket of water as she was fetching the same from the house-well, when she hears her husband calling out for her. As it turns out, the bucket hangs in mid-air, a sign of her devotion, as she rushes to her husband’s side.

It is against this overall background that Thiruvalluvar has been positioned in the contemporary Tamil psyche as an epitome of Tamil identity from a distant past, independent of his other identities of religion and caste. He was supposed to be from the weaver community, and/or possibly ones who announced the king’s orders to the towns and villages, beating drums and the like.

So, giving a religious identity to Thiruvalluvar was not on just now, especially after PM Modi, according to a section of the Tamil social media, was doing all this to woo the electorate ahead of the state assembly polls due in May 2021.

To the list, the critics have added the prime minister praising Tamil as the oldest living language at the Bangkok function, and earlier quoting Tamil poet, Kaniyan Poongundranar’s line ‘Yaadum ooraey, yaavarum kaeleer’ (‘all the world is mine, and every human is my kin’) in his UN General Assembly speech this year. To these sections, Modi wearing the Tamil attire of ‘veshti’ at his Mahabalipuram informal summit with Chinese President Xi Jinping, was one more in the list, nothing more, nothing less.

At a time Hindu/Hindutva revivalist propaganda has triggered a similar trend in defence of Tamil culture and identity, both inside the country and outside, saffronisation of Thiruvalluvar goes deeper than a political issue and/or gimmick.

Though it is true that British era pictures of the Tamil savant did show him with Hindu symbols of holy ash on the forehead and rudraksha beads around his neck, it was also the time when ‘Mother India’ or ‘Bharat Matha’ as Goddess Durga astride her mount, lion, with her trident sporting the tricolour of the national movement.

It was thus that when the Tamil Nadu government under Congress Chief Minister M Bhaktavatsalam accepted the Opposition DMK’s demand for displaying a picture of Thiruvalluvar in the state assembly, they did not adopt the traditional ‘Hindu-ised’ picture, but commissioned a new one. This picture, drawn by Salem-based artist, the late K R Venugopala Sarma, was bereft of all caste and religious identities.

As may be recalled, since the DMK came to power in 1967, the government ordered displaying a picture of Thiruvalluvar in all government offices and transport buses, with one couplet displayed alongside. There are possibly more statues of the poet-savant installed across the state than possibly that of political leaders like DMK founder, the late C N Annadurai and his ideological guide, Periyar.

What more, the day’s proceedings of the state assembly for decades now (independent of whoever is the chief minister and which of the two Dravidian majors is in power), begins only after the recital of a Thirukkural couplet and the rendering of its meaning for the members to listen and imbibe.

Though the Thirukkural couplets fall under three broad heads, only those from the first two, namely ‘Araththuppaal’ and ‘Porutpaal’, translating as ‘Righteousness’ and ‘Materialism’, are rendered at such readings and used in public displays. Couplets from the third one, namely, ‘Kaamaththuppaal’, relating to Love and related pursuits, are carefully kept away.

A whole new generation has thus grown up in the state, reading Thirukkural while travelling by public transport, apart from learning them in their Tamil text-books in class rooms, both at the school and college levels.

With nation-wide Hindu revivalism now triggering Tamil cultural revivalism --  which is least understood and acknowledged elsewhere in the country, and confusing it with traditional ‘Dravidian’ political identity, still -- pan-Tamil public protest movements like those for the revival of Jallikattu bull-fight and even livelihood issues centred on development projects in different parts of the state, have a pan-Tamil identity providing the larger backdrop.

The avoidable revival of Thiruvalluvar’s religious identity can only add to the heat and steam of the pan-Tamil cause, going beyond the dust that it might have kicked up just now. 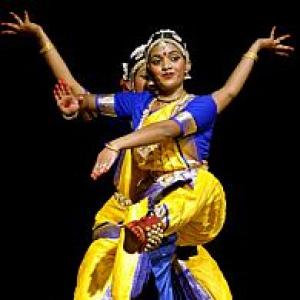