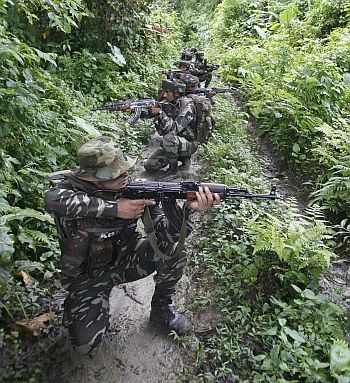 A lack of understanding on how to tackle the Maoist challenge is adversely affecting security operations on the ground and not the inefficiency or inability of the security forces to put pressure on the Maoists, says former Chhattisgarh top cop Vishwa Ranjan.

The Maoists again struck successfully and killed 15 security personnel and one civilian about 8 kilometres from Jheeram, where they had earlier killed several senior Congress leaders before the assembly elections in Chhattisgarh in May 2013.

Although various questions like failure of intelligence, unpreparedness of security forces and allied issues are being raised in the print and visual media and are also being discussed by public at large the fact is that they are mostly invalid issues put forth due to an unclear understanding of the national and other security issues.

Any understanding of military strategy and tactics would indicate that an ambush in one of the most lethal methods to inflict maximum damage on security forces. Militarily it is well understood that it is very difficult to counter a well planned ambush and causalities can be high. The fact that around 48 security personnel who were ambushed were able to break the ambush even after losing 15 if their men and forced the Maoists to retreat needs to be highlighted and appreciated.

There are other issues that need to be understood in the present case. The national highway (NH-30) was being repaired and this project was being opposed by the Maoists. A small security posse was being sent out every day to protect the men working on the highway. On receiving information about additional deployment of Maoist cadres in the area the security forces increased their strength to around 50. However, the aims and objectives of the security personnel was primarily the protection of the repair site and men working on it and thus defensive and not offensive in nature. It was this force that was ambushed. The nature of an offensive was against the Maoist is very different from defensive postures although ambushes can be resorted to in both types of operations.

Offensive battles against the Maoists or any other insurgent groups is based on the principle of “target ,encircle and destroy”. Such operations are mostly based on specific intelligence. Another type of offensive operation concentrates on inundating an area with security forces to flush out the terrorists or insurgents.

Unfortunately, the whole gamut of security operations is neither understood by the chiefs of the security forces nor the mandarins of the home ministry leading to instructions which not only hamper operations but are also extremely demoralising for the forces. A few years ago a chief of a central para military force issued an instruction that his force will not more out beyond 5 km in the Maoist area for security operations.

The instructions clearly indicated that the senior officer did not have faith in the combative efficiency of his force. The instructions demoralised the force to such an extent that it stopped leaving the security of their camps.

Additionally, a fair deal of confusion is being created by the urban supporters of the Maoists, human rights organisations and some civil liberty bodies while most of them claim not to be Maoist or Maoists sympathisers they seldom register their protest against incidents of Maoist violence.

Instead they rationalise the Maoist violence as a response to state-sponsored violence. They are either unaware of the Maoist stand on violence or knowingly try to obfuscate the issue.

It is obvious from the Maoist document that a violent insurgent war has been thrust on the Indian State.

The Indian State has, therefore, no option but to react appropriately to the Maoist challenge.

Similarly, while the central paramilitary forces have been sent to assist the state police, the chiefs of central paramilitary forces often sent separate instructions to their forces without keeping the state police chief informed. It is lack of coherence on the Maoist affairs that is adversely affecting security operations on the ground and not the inefficiency or inability of the security forces to put pressure on the Maoists.