Big-ticket investments taking off is crucial for Kerala given the years it lost to labour militancy courtesy the same political forces currently in power, explains Shyam G Menon. 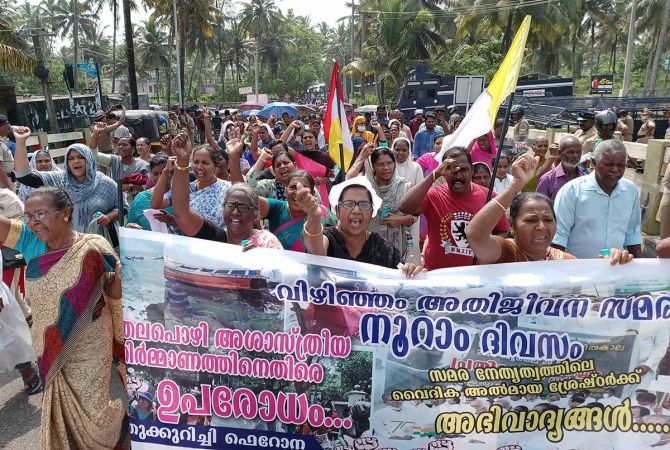 A protest against the seaport project at Vizhinjam was on before the secretariat in Thiruvananthapuram.

The main protest, on since a few months, was fuelled in the main by inadequate rehabilitation of those displaced by the project and a belief that heightened coastal erosion was linked to the new port's breakwater system.

Both the topics -- rehabilitation and breakwater -- found mention in speeches that day.

Those gathered were asked to recall the pivotal role played by fishers when Kerala was hit by floods in August 2019.

In those days of deluge, the fisherfolk had assisted selflessly. This was despite the fishing community living a desperate life.

Survival on the coast has always been a gamble.

Although not specific to India, Kerala or Vizhinjam, the opening chapter of the 2022 edition of The State of World Fisheries and Aquaculture by the Food and Agricultural Organization, has a graph on world capture fisheries and aquaculture production (featuring data since 1950) that captures an emergent global reality.

While the contribution of aquaculture continues to grow, the segment titled 'capture fisheries-marine waters' peaks around 1995 and hovers at that level thereafter barring marginal crests and troughs.

When it comes to employment, FAO data spanning 1995-2020 shows that Asia is where the bulk of fishers live.

With 167,000 marine fishermen, Thiruvananthapuram topped among the districts.

About 30 per cent of this 167,000, were 'active marine fishermen'. There is additionally, those employed in ancillary sectors. 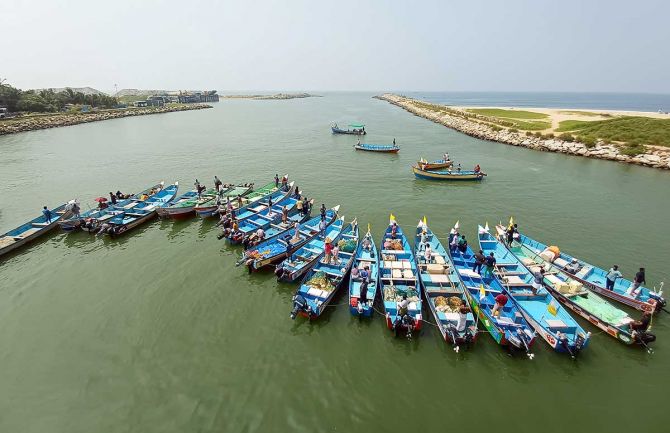 IMAGE: Fishermen blockade the harbour at Perumathura Muthalapozhi during a protest against the Vizhinjam port project, October 27, 2022. Photograph: ANI Photo

Together with trends in fuel cost and inflation, the picture of life the above data portrays, is not hard to grasp.

First, the number of people dependent on fishing for livelihood is not small.

Second, it has always cost a handful to put a boat out to sea and that cost has risen.

Third, recouping the cost is subject to the vagaries within a plateauing global catch.

Not surprisingly, as reported by onmanorama.com on August 18, 2022, at least four demands set forth by the protestors were related to livelihood -- they wanted subsidised kerosene, speedy compensation for fishers involved in accidents at sea, dredging near the fishing harbour at Muthalapozhi and minimum wages on days of no work (due to weather warnings etc).

However, the critical demand concerned stopping the project work and undertaking a study on the project's alleged link to coastal erosion.

On October 27, 2022, in a report just ahead of the protest turning 100 days old, onmanorama.com noted that efforts were on to address some of these demands even as the protesters cited lack of firm assurance from government.

The meeting before the secretariat was partial to emotion. There was poetry and singing.

Speakers pointed out how the tonnes of rock used in the breakwater would have come from quarries in the hills and therefore the seaport project affected sea and hills alike.

It endorsed the image of an unsuited paradigm for development underway; the ecological fragility of Kerala has been in focus ever since climate change intensified the annual monsoon.

To one side of the assembled speakers, a small line of artists created paintings inspired by the sea.

Days earlier, a blockade of roads around Thiruvananthapuram by the agitators, while vaulting their grievance to greater attention, had inconvenienced the public greatly.

On the hundredth day of their agitation against the port, the protestors stormed the project site via sea and road.

The court, in a subsequent observation said it cannot prohibit protest, but none should take the law into their hands. 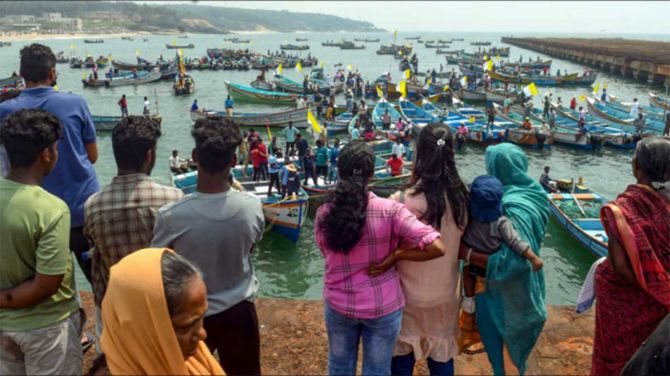 The protesting fishers is one half of the Vizhinjam story. The other half deals with what the project represents.

Kerala's capital city has maintained a studied distance from the agitation against the port in its neighbourhood.

And it isn't because the city doesn't care for the fisherfolk in its midst or there is widespread affection for Adani (they are executing the port project) in the state featuring Left politics.

The port is among the biggest industrial infrastructure projects in the state.

Big-ticket investments taking off is crucial for Kerala given the years it lost to labour militancy courtesy the same political forces currently in power.

The state government has said the port project won't be stopped (there are pro-port campaigns underway, perhaps a first for Kerala).

The court has said that project work shouldn't be obstructed.

Further, within Kerala, what industry traditionally existed was always around Kochi.

Vizhinjam gets viewed through this prism of Thiruvananthapuram overlooked.

The fishing community, residents of the district's seacoast, find their fate tossed by these pulls.

Vizhinjam's tryst with being a commercial seaport in the modern sense, commenced during the tenure of Sir C P Ramaswamy Iyer as Diwan of Travancore.

In June 2022, The Hindu published an article about G G Menon, a resident of Thiruvananthapuram, set to turn 100 years old and who at the beginning of his career as an engineer in the state public works department had been part of the team surveying Vizhinjam to develop it into a seaport.

Although a report was submitted to the government, further plans were dropped, Menon recalled. This was in the mid-1940s.

While Vizhinjam continued thereafter as a fishing harbour in the shadow of its famous neighbour from tourism, Kovalam; Kochi, to the north, grew as Kerala's flagship port.

Situated in the backwaters, Kochi port requires regular dredging and the depth suited for big ships have to be maintained at considerable cost.

As containerised cargo picked up in India and ship size grew, the search for a deep-water port on India's west coast gathered pace. That's how years later, Vizhinjam -- it is 176 nautical miles or 326 kilometres, from Colombo (as per ports.com) -- returned to shipping's attention.