The Bengal outcome can have a marginal impact on national politics.
Whereas elections in UP next year might still change the course ahead of the parliamentary poll in 2024, observes Virendra Kapoor. 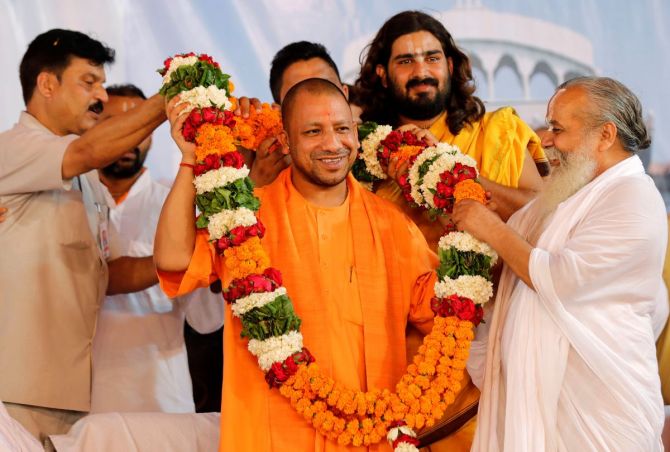 Despite a small respite in the intensity of the coronavirus in the last couple of days, uncertainty remains about how and when the second surge will abate.

Caught unprepared by the sheer ferocity of the infections, governments and private health providers are trying to cope as well as they can under the circumstances.

There is no quick-fix solution to this once-in-a-century crisis which right now continues to ravage much of the economically advanced Western world as well.

Nobody, just nobody, in any country can be said to have handled the crisis well.

Everyone is wiser in hindsight. The virus overwhelmed the health systems of advanced countries as it did of those with poor or no health system at all.

If the US and the UK, for example, now seem to be pressing full speed ahead with vaccinations, go back a few weeks and consider the mass infections and deaths they had had to suffer before allowing graded relaxations in the slow march towards normalcy.

Germany, easily the most well-governed nation in the free world, thought it to be fortunate to have survived the initial weeks and months when other European nations, notably, Italy and France, were gripped by the virus.

It is now struggling to contain the contagion, shuffling valiantly between lockdowns and partial openings.

The Germans are vehemently divided on trading basic, everyday, rights even for a few short days for vanquishing the virus.

The French too have hit the streets opposing stringent curbs on movement even though the virus hangs in the air.

Nearer home we have chosen to plunge into panic mode, heaping blame for everything under the sun on the people in power.

The failure to recognise the extraordinary catastrophe, the unpredictability of the virus and the endemic fragility of the administrative system to cope with such gigantic challenges, which anyway remain beyond the capabilities of any temporal authority, has contributed to the current mood of doom and gloom.

Death and distress dominate our public discourse to the exclusion of all else.

The news media has further fuelled the ghoulish obsession in part because it helps vent against the government it never liked to begin with, and in part because the reality of human misery is heart-breaking.

Of course, this does not condone the failure to anticipate the second wave.

If you choose to be critical, there is plenty you can tot up against the central and state governments.

Declaring victory over the virus prematurely was a blunder, it induced complacency and even neglect of basic measures.

We failed to expand manufacturing of vaccines on license.

While the Serum Institute was bound by foreign copyright, at least Bharat Biotech's vaccines should have been manufactured on license by other companies.

We did not augment the manufacturing capacity of medical oxygen in time for the second wave.

Without doubt, in hindsight you can fault the prolonged assembly election schedule and the Kumbh Mela as well.

They supposedly proved super-spreaders, though empirical evidence suggests that the second wave hit those states where there was neither an election or a huge gathering such as the Kumbh Mela.

Meanwhile, while the foremost priority of all governments must be to contain the virus, post-assembly election the only other conversation centres around the likely national role for Trinamool Congress leader Mamata Banerjee.

Some of the optimism about the West Bengal chief minister helming a national alternative to Narendra Modi may be discounted as sheer wish-fulfillment.

But those desperate for a saleable pan-India figure to lead the motley crowd in the Opposition fail to see Banerjee's limitations in challenging Modi at the national level.

It will be highly unrealistic for anyone to perceive Mamata as the leader of the proposed federal front.

The Trinamool Congress failed to register a wee bit in neighbouring Jharkhand and Bihar, though it had a few candidates in the assembly polls.

Banerjee is quintessentially a regional leader with little traction outside, particularly in electorally crucial northern and western India .

The short point is that the fawning over Mamata in the first flush of her victory in Bengal ought to be tempered by a touch of realism.

Remember, disregarding the Amit Shah hype of winning 200 seats, jumping from three to 77 and decimating the Congress and the Left was no mean achievement for the BJP.

After we overcome the coronavirus challenge, politics will return more or less to the same normal as before the assembly poll.

The new DMK government will see percentage in doing business with Modi as earlier did the AIADMK.

Chief Minister Stalin may not be a pushover like his predecessor Palaniswami who had to consolidate his position in the post-Jayalalithaa AIADMK, but his ambitions too are not unrealistic.

Stalin would not abandon the state to undertake a risky national role.

Like Mamata Banerjee, Stalin and other regional Opposition leaders would like a share in power should a credible coalition succeed in getting the better of the BJP-led NDA.

That the next Lok Sabha election is still three years away should persuade those gloating at the alleged defeat of the Modi-Shah duo to hold their horses.

Return to post-Corona normalcy might jolt them into landing on terra firma.

The Bengal outcome can have a marginal impact on national politics.

Whereas elections in UP next year might still change the course ahead of the parliamentary poll in 2024.