The Orwellian surveillance State is here. And here to stay, asserts Virendra Kapoor. 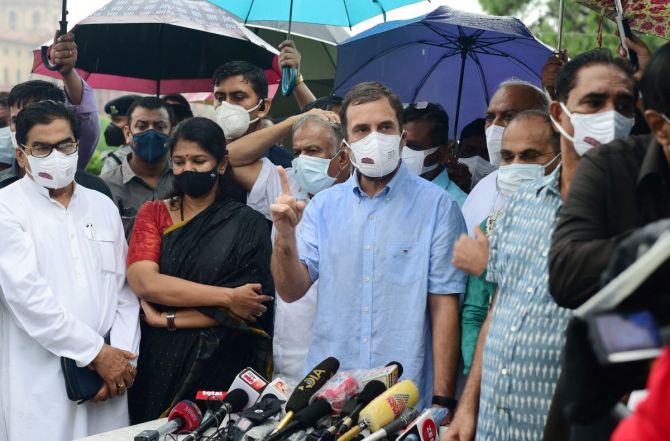 IMAGE: Congress MP Rahul Gandhi with MPs of other Opposition parties addresses the media on the issue of the Pegasus Project, July 28, 2021. Photograph: Kamal Kishore/PTI Photo

In early 2018, Jeff Bezos, the world's richest man, complained that his phone was broken into.

His romantic exchanges with his then girl friend, a popular television newscaster, were leaked to a large-selling tabloid newspaper.

This eventually caused the break of his marriage, leading to the biggest ever divorce settlement of over $ 40 billion.

There is a back story to the Bezos' phone break-in. A few months prior to the hacking, he along with a number of Hollywood hotshots had dined with Saudi Crown Prince Mohammed bin Salman.

The Amazon owner and MBS, as the Saudi prince is called, exchanged phone numbers. Meanwhile, the Bezos-owned Washington Post was hitting out at the Saudi prince for the murder of its correspondent Jamal Khashoggi.

To get back at Bezos, MBS is said to have commissioned the hack of Bezos' phone.

The data exfiltrated from his phone produced the expose of his extra-marital relationship.

Notably, a few days before the theft of data a malware file was injected through WhatsApp into Bezos' phone reportedly from MBS's number.

Now consider another facet of the modern tools of communications.

Following a terror attack in a small town in San Francisco in 2018, the Federal Bureau of Investigation asked the iPhone makers to unlock the phone of one of the suspects.

Apple declined, saying it would compromise the integrity of its phones and violate its rights under the First Amendment which protects free expression, right to practice religion, assembly, etc.

Even when the US attorney general directed Apple to decrypt the phone, the company refused, arguing such backdoor entry would encourage hackers and criminals to misuse its phones.

Surprisingly, even before the courts could pronounce in the matter, the FBI stopped pressing Apple. Why?

Because it had, meanwhile, successfully sought the services of an Israeli firm to pry open the iPhone. It no longer required Apple to decrypt the software.

What the above two instances establish is that 1. No digital device in the world is one-hundred percent foolproof; its integrity can always be compromised by malware; and 2. Even the world's most renowned investigative agency needs to tap Israeli tech firms for help to intrude into otherwise locked and encrypted smart phones.

Israel is miles ahead in inventing spyware, a testimony to its need to stay ahead of the game given the existentialist threat it faces 24x7 from hostile elements all around.

There is a downside however. Which is that Israel's success in the technological field also leads to its abuse by foreign countries and other State agencies.

So is it a surprise that the Pegasus spyware, owned by the Israeli NSO Group, was used to break into the phones of 50,000-odd people in seventeen different countries?

Among those whose phone was broken into was French President Emmanuel Macron. In his case, the finger of suspicion is pointed at the Moroccan government which has denied the charge.

About a thousand Indian phones, belonging to politicians, both from the ruling Bharatiya Janata Party and the Opposition, secretaries of central and state ministers, a former election commissioner, a couple of judges, and 40-odd journalists, were said to have been snooped upon.

Significantly, among the journalists were those widely known to be hostile to the government but also those claiming to be close to it.

The official response to the Pegasus expose, the second in a row after it first broke a couple of years ago, is on familiar lines: The government had no hand in it.

Like the first, this one too is bound to be talked out.

This is because no government is foolish enough to undertake such extra-judicial operations under the aegis of its own bonafide agencies.

Even though the NSO claims that it sells the spyware only to foreign governments and their designated agencies, the buyers are always careful to keep room for deniability.

It is though ironical that in Parliament last week the task of washing its hands off the scandal fell on the new Information Technology Minister Ashwini Vaishnaw, who himself figures among the persons snooped on.

Was someone double-checking his credentials before making him a minister? We cannot be sure.

While the matter has exercised the MPs, with the functioning of the two Houses disrupted all through the week, the point that needs to be emphasised over and over again is the vulnerability of all digital devices to malware and spyware.

Snooping in one form or another has been part of Statecraft for ages.

Modern States despite Constitutional guarantees to citizens' rights find it hard to resist the temptation to spy on people considered a threat.

In short, the Orwellian surveillance State is here. And here to stay.

Why, corporate snooping is now an accepted part of a modern CEO's arsenal.

Some years ago, we had the Radia tapes in which the then head of the most iconic industrial empire was heard speaking at length with his PR honcho about men and matters, something he would be embarrassed to admit in the open.

Then there were tapes of snooping by a business group on its rivals which revealed conversations, among others, of a powerful corporate czar who is heard claiming that 'Congress to apni ghar ki dukaan hai'.

The point is that smart phones are great tools for bridging distances and offering real-time video-conferencing and data exchange. But like all such advances these too have downsides which a bent State finds easy to abuse.

No digital device is foolproof. The latest is that they have broken into the computers of the Saudi oil behemoth, Aramco, and threaten to leak the data unless paid a $50 billion ransom.

Lest the above sound as justification for phone hacking, it should be noted that playing the proverbial devil's advocate we have only noted the actual play in the digital world.

The Internet may have woven the world in one seamless web, but precisely for that reason spyware, such as the one from Pegasus, can infect phones and cull out data for those commissioning such expensive operations.