Since when have elections become rocket science that you need to hire highly-priced specialists?
And even if in the age of social media every party needs to present its best face, is Prashant Kishor the only one with such expertise, especially when his record is mixed with more losses than election wins to his credit? asks Virendra Kapoor. 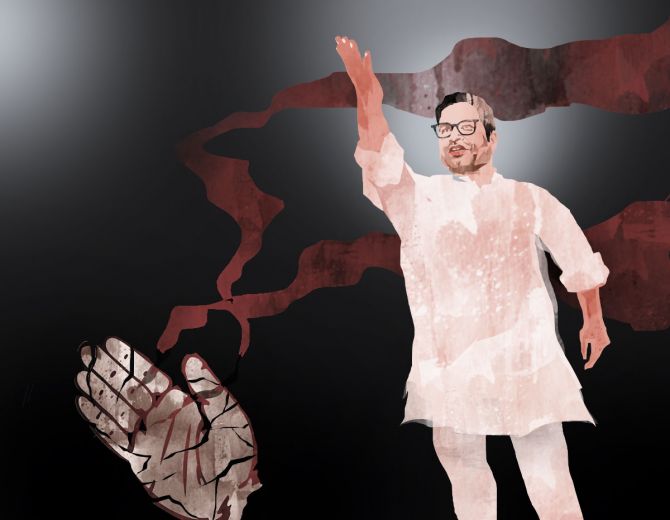 What is it that Prashant Kishor sells that every party seems to want to engage his services?

Since when have elections become rocket science that you need to hire highly-priced outside specialists?

And even if in the age of social media every party needs to present its best face, is Kishor the only one with such expertise, especially when his record is mixed with more losses than election wins to his credit?

These and a host of other related questions come to mind given how the Gandhis, badly bruised by the latest round of state elections, have gone back to him with a begging bowl in hand.

Remember they had sought to hire him for the previous Lok Sabha election as well, but negotiations apparently broke down on his demand for a key position in the party hierarchy.

Now that the Gandhis have been pulveriSed by the humiliation heaped on them by the voters in Punjab, Uttarakhand, Goa, UP etc, and fearing that the polite push from the G-23 can turn into a full-scale revolt should something urgent not be seen to be done to save the sinking ship, they have come down from the high pedestal.

Without actually letting go of the control of the party they now give the impression that something is being done for its revival.

Apparently, Kishor made a presentation to the chosen few handpicked by the Gandhis, setting out a plan to make the Congress viable once again.

Not unlike a professional marketer making a pitch for increasing the sales of say, a brand of soap, Kishor is said to have used managerial lingo to suggest what are actually commonsensical things the Congress needs do if it has to regain relevance.

Like acquiring an identity of its own, standing for something with which voters can relate to.

Not the mish-mash of a soft Hinduvta the original copyright of which is with the BJP.

Nor the casteist kitsch of Mandal outfits like the Samajwadi Party or the RJD.

Rediscovering its original personality as a broad platform for secularism, liberty and economic pragmatism is clearly the only option.

You do not need to pay tens of millions of rupees to Kishor and hire his army of paid volunteers to tell you this, do you?

The key point is that in a fiercely competitive electoral politics with multiple parties targeting the same set of voters, success still hinges on a saleable, nay, a charismatic leader.

Without a leader, howsoever attractive a party's programme, electoral success will still elude it.

The best example is the BJP.

It is Narendra Modi's strong connect with ordinary voters that largely accounts for the party's huge success.

Even though it had a strong organisational set-up before 2014 as well, it is only after he assumed control that the BJP has gone from strength to strength.

Here then is the rub. Whatever Kishor does to spruce up the Congress's act, to energise its social media operations, unless it has a saleable leader to helm the party, winning elections will be an uphill task.

Being the oldest party you can still find Congressmen in all nooks and crannies of the country.

Unfortunately a deficient leadership has failed to tap this residual goodwill while seeking to expand its base with the younger generations of voters. 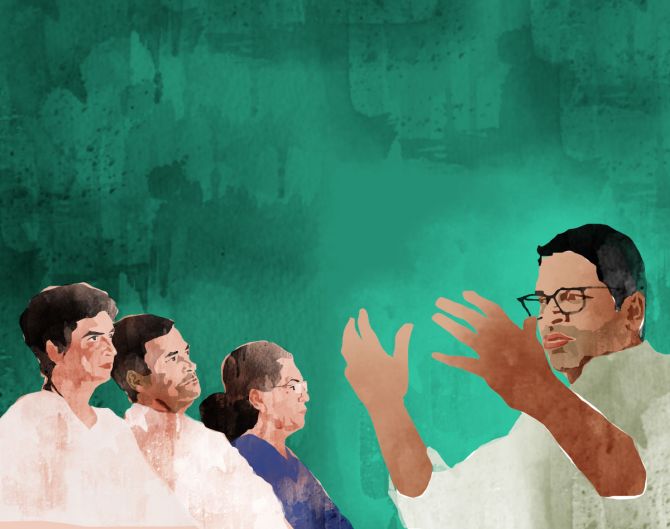 Kishor seems to think winning elections is like selling soap.

Otherwise, how do you explain his switch from the BJP to the JD-U, DMK, AAP, TMC, TRS, YSRC et al.

Often he is negotiating a new contract with one party while organising defections from it to his existing client.

For example, right now talking to the Congress while pushing Congress leaders into the TMC.

The question is if what Kishor sells is so potent, how come Trinamool Congress failed to win a single seat in Goa despite his paid army of warriors from the Indian Political Action Committee pitching their tent in the state for months and spending crores of rupees on saturation audio-visual and door-to-door propaganda?

The truth is Mamata Banerjee won West Bengal, not Kishor, though he may have added an extra zing to the campaign.

And she won because she was the foremost leader of the State.

By the same logic, she failed in Goa despite Kishor's best effort because Goans do not accept her as their leader. Period.

In other words, a strong and charismatic leader is the key to win elections.

Kishor merely acts as a paid catalyst in that success, if at all.

Professional election strategists, whose tribe has grown in recent years with every party hiring their services, are good as backroom advisers for providing talking points, the thrust of the publicity campaign, study of demographics of each electoral pocket, and for focusing on region-specific issues, etc.

But to give them pride of place in the top hierarchy would undermine the experience and contribution of traditional politicians.

Kishor in the driver's seat in the Congress would have been be a clear rebuff to the Chidambarams and Tharoors, Manish Tiwaris and Jairam Rameshs and a host of others who have stuck with the party despite its fast diminishing fortunes.

By seeking to elevate the professional hawker of electoral skills to a position second only to themselves, as reported in the media, the Gandhis may be yet again deceiving loyal Congress workers who crave for a genuine change in the party for the sake of its revival and relevance.

Kishor does not possess a magic wand to change the voter mood.

His induction may have shielded the Gandhis from internal critics who in case of a future electoral loss would be expected to blame the high-profile poll strategist rather than the trinity of the mother, son and daughter but it certainly would not ensure the party's revival.

As for the reported Kishor plan for the Congress to concentrate only on 360-370 -odd Lok Sabha seats out of the total 542, and to tie up with regional outfits for the rest, one must ask where is the expertise involved in such a commonsensical prescription?

And if he offers his services as a bridge between the Congress and regional groups, some of whom may be his former or current clients, it smacks of sheer arrogance.

For an electoral alliance to work, well respective leaders need to reach an understanding and build mutual trust, and not rely on a commissioned middleman to broker the seat-sharing arrangement.

In short, the solution to the mounting woes of the Gandhis, and, thus, of the Congress, strictly in that order, lies in their stepping aside.

Handing over the reins to a relatively young leader, say, a Sachin Pilot or a Shashi Tharoor or Manish Tiwari would do far more for the revival of the party than their engaging a professional election strategist willing to sell his services to the biggest bidder.