Wait for a while before he does another somersault...
But one thing is reasonably certain -- the twice betrayed BJP may not embrace him again, predicts Virendra Kapoor. 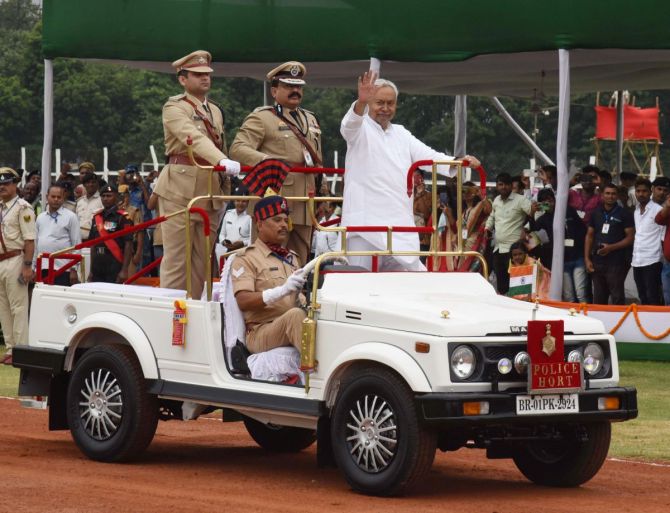 Truly, there is not a dull moment in politics. Given that ordinary people are obsessed with the doings of our netas -- for evidence look no further than the newspaper headlines -- Nitish Kumar ought to be commended for keeping Biharis engaged in his twists and turns.

It being one of the poorest states, with every other Bihari poor as per the NITI Aayog's Multidimensional Poverty Index, Nitish Kumar's somersaults could be said to be performing a crucial service insofar as his political antics help in taking the public's attention away from grinding poverty and other hardships.

Power ultimately being a game of numbers, it does look extraordinary that the leader of the third largest group in the Bihar assembly -- the Janata Dal-United -- should be the chief minister while the largest party, the Rashtriya Janata Dal, plays second fiddle.

It is only a matter of time before Deputy Chief Minister Tejashwi Yadav -- whom Nitish had accused of corruption before snapping ties with the RJD in 2017 -- begins to act the way a RJD leader is prone to.

Money and muscle power will soon return to Bihar with a vengeance, especially with Nitish no longer welcome to again seek shelter under the saffron tent.

Small wonder that the new government is set to aggravate caste divisions further with a controversial caste census. What useful purpose it will it serve is not clear.

Already, there are reports that Tejashwi has sought details about the number of employees belonging to the minority community in various government departments.

Curiously, the BJP may not be overly concerned with the RJD's conscious move to pander to the minority community.

In a state where very often the pull of caste has superseded that of religion, any attempt to appease the minority community is bound to play into the BJP's hands.

Whether there is a special provision for employment in government services and higher grants to madrasas and the promotion of Urdu, the BJP is bound to react adversely to bolster its Hindutva constituency.

Broadly, the caste constituencies of all major groups are clearly delineated.

The BJP draws support from the upper castes -- Rajputs and Brahmins who constitute roughly 15 percent of the population.

The RJD relies on the Yadavs and Muslims roughly numbering 30 percent while Nitish's JD-U counts on his own Kurmi caste and Koeris which together come to about ten percent.

Thus far, unless two of the three main parties team up, it has been hard for any single party to reach the half-way mark in the assembly.

That is the reason why Nitish on his own has never won a simple majority. He has oscillated between the BJP and the RJD to occupy the chief ministerial gaddi.

Over the years, Bihar politics has so evolved that at least in the parliamentary polls it largely forsakes caste to vote for a viable national party with a charismatic leader.

By all accounts, in 2024 most observers reckon that Modi should face little resistance even from a Nitish-Tejashwi gathbandhan since neither is seen capable of leading the country.

Being by far the only credible leader at the national level, Modi is most likely to cancel out caste considerations, especially in the absence of a credible alternative. 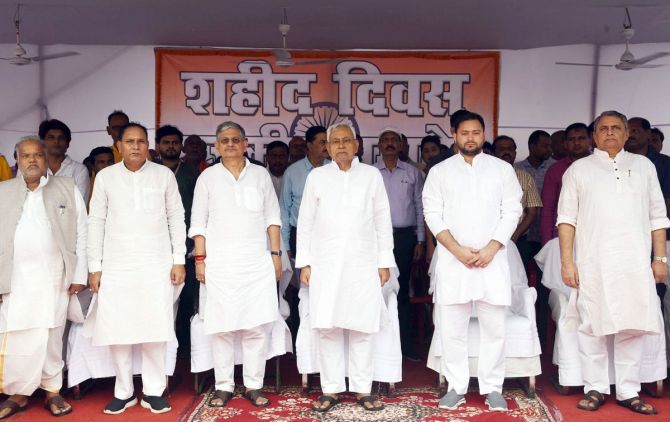 It is in the assembly election, due in Bihar in October-November 2025, that the BJP going it alone might face its toughest challenge.

That is, of course, assuming that the Nitish-Tejashwi jugalbandi can survive that long. Assuming it does, its record in government too will come into play.

With 17 years of anti-incumbency against him, any coalition led by Nitish may not find the going easy, especially if it has nothing to show on the governance front.

A highly indebted state, without constant bail-outs by the Centre, Bihar's finances remain precarious. The recurrent demand for according it special status has not found favour with successive central governments.

Special status, which allows for a greater flow of central funds, will cause other states to seek similar dispensation.

With no industrial infrastructure, poor communication services, endemic poverty, and a woeful lack of job opportunities, Biharis are forced to migrate in droves to other states, especially big metros in search of largely menial work.

All governments since Independence have failed to revive the state's economy, though Patna was a major industrial and educational hub in the pre-Independence period.

With political battles set to become more intense in coming weeks, 'Sushasan Babu', the nickname Nitish acquired in his first term as CM, has lost his grip on the administration.

Prohibition has become a huge headache for the law and order machinery, with even the Chief Justice of India lamenting that cases pertaining to the violation of the no-liquor law have clogged the already congested court system in the state.

There is widespread concern that a climate of fear and lawlessness -- the 'jungle raj', as Nitish had so evocatively described the Laloo Yadav regime, could soon return to haunt Bihar, especially with the RJD calling the shots in a government notionally headed by the JD-U leader.

He began by dumping his one-time mentor Laloo Yadav, then, he let down George Fernandes, his senior in the erstwhile Samata Party, refusing to even give him a ticket for the Lok Sabha poll. He humiliated Jaya Jaitley, once the Samata Party president, denying her a Rajya Sabha nomination.

Five years ago, he distanced himself from Lallan Singh, preferring to send fellow Kurmi, Ram Chandra Prasad Singh, a former IAS officer, to the Rajya Sabha, making him a minister in the Modi government.

A few years later, he dumped RCP Singh and went back to Lallan Singh who is now the JD-U head.

So, it goes on and on... Wait for a while before he does another somersault... But one thing is reasonably certain -- the twice betrayed BJP may not embrace him again.