For the first time in seven years the prime minister finds himself at his most vulnerable, observes Virendra Kapoor. There may be a lesson in the recent events in Israel which finally culminated in the formation of an all-embracing coalition government under Prime Minister Naftali Bennett.

Mutually hostile religious parties, representing Jews at one end and the Palestinian-Arabs at the other, as also the ideological left and right with the centrists thrown into the mix joined hands with the singular objective of ousting Benjamin Nethanyahu from power.

After twelve years of continuous authoritarian rule, Israel's strongman had to finally bow out.

This was a historic moment for Israel, marking the triumph of pragmatic politics over all else.

Consider the ideological and personality opposites who put aside their differences with the sole objective of ridding the country of the divisive and authoritarian Netanyahu rule.

In the 'Change Coalition' the centrist Yesh Atid party, commanded more support in the Knesset, the Israel parliament, but its leader Yair Lapid allowed the leader of the smaller Yamina party, Naftail Bennett, to become prime minister for the first two years after which Lapid would replace him provided the coalition survives that long.

Of course, there is a big question mark about the longevity of the new coalition, especially given that it has the thinnest possible majority in the Knesset.

More importantly, Netanyahu has not ceased plotting its fall from the moment the omnibus coalition found traction.

His resort to excessive force and ultra nationalism as preferred tools to divide the nation with the sole objective of prolonging his stint in power was a key factor in bringing diverse and divided Opposition together under one umbrella .

Yet, its very success in ousting him from power ought to inspire the Indian Opposition to shed its narrow personal and ideological differences, that is, if it is actually serious in frontally challenging the well-entrenched Modi government.

In many ways, this may be the ideal moment for the Opposition to strike against Modi.

For one, for the first time in seven years the prime minister finds himself at his most vulnerable.

Despite several policy missteps in this period, including demonetisation in 2016, or the imposition of a stringent nation-wide lockdown at four short hours' notice last year, to name only a couple, it is the current moment which has seen mass distress and devastation.

The seeming unpreparedness for the second surge in the coronavirus pandemic, which has caused far more deaths than officially recorded, with bodies floating in the Ganga in UP and Bihar, has shocked the conscience of the nation.

Such is the undercurrent of anger and disenchantment that even the urban middle class, which has traditionally supported the BJP, feels let down.

There is plenty of episodic evidence about the government's unpopularity following its mishandling of the pandemic.

Reports of oxygen shortages, hospital beds, medicines et al even in the best hospitals in the national capital only help underline the much larger crisis that has engulfed the country.

Without doubt, the number of fatalities from the coronavirus was in multiples of the officially recorded figure.

Again, despite the share markets maddeningly pursuing an ever high trajectory, the economy is in a poor state.

Joblessness, especially in the much larger informal sector, is a record high.

After a long time even consumer inflation has crossed the RBI's comfort zone of six percent, with petrol and diesel prices crossing the psychological important three- digit mark in the history of the country.

There is unrest among farmers of Punjab, Haryana and western UP.

The Opposition, especially the Congress in Punjab where it is in power, is no doubt stoking the anger against the three farm reform laws and, as a result, the more committed farmers' unions have persisted with their agitation.

Also, after the recent spectacular return of Mamata Banerjee as chief minister in West Bengal with an increased majority, the ruling party has further suffered a blow to its image.

Having invested much in winning the state, despite the fact that the BJP was virtually beginning from scratch, winning 77 seats was no mean feat but the hype about ousting the Trinamool Congress from power needlessly created the impression of a huge setback.

Regardless, the West Bengal rebuff further buoyed the spirits of the Opposition.

All this is reflected in the latest popularity survey of global leaders conducted by a US-based organisation.

Its latest survey for May this year showed a 20 percent fall in Modi's approval rating from the high of recorded in August last year.

Admittedly, even at 66 percent the prime minister remains by far the most popular leader in the country.

Meanwhile, it was significant that amidst talk of a federal front to take on Modi in the coming electoral battles which would eventually culminate in the 2024 parliamentary contest, Sharad Pawar had a much-publicised meeting with Prashant Kishor.

The professional pollster, fresh from his stellar feat in West Bengal, might be useful should Pawar, who is pushing 80 now, make one last bid to fulfill his life's ambition to become prime minister.

A vital roadblock which needs must be cleared before the proposed federal front can make headway is for the Congress to demonstrate its willingness to make a sacrifice in the larger cause of Opposition unity.

Despite its reduced numbers in the Lok Sabha the Congress is still the only national party around which the regional groups in the Opposition can organise themselves into a cohesive unit.

Given Rahul Gandhi's low public standing, all that the party needs to commit in all sincerity is to yield the leadership of the proposed federal front to someone like Pawar or another acceptable face from the coalescing parties.

It is because neither the country at large nor the smaller Opposition groups are prepared, at least, as yet, to accept the Gandhi scion as their leader.

The first available opportunity for the Opposition to prove its credentials would come early next year.

Assembly elections are due in UP, Punjab, Uttarakhand, Himachal Pradesh, Gujarat, Jammu and Kashmir, Goa and Manipur, in 2022.

But UP is most crucial. Failure to unitedly take on the Yogi Adityanath government would pep up the BJP yet again and allow it to put aside the current downturn in its fortunes well behind.

Hopefully, between now and next March when the UP poll is likely to be scheduled, the Opposition would get its act together.

Aside from the anti-Netanyahu coalition in Israel, leaders of the motley Opposition groups have Maharashtra to draw the right lessons from.

Here, with the singular objective of denying power to the BJP, which had emerged the single largest party in the assembly, the Shiv Sena, the BJP's electoral ally, joined hands with the Congress and the NCP to grab power.

Why cannot that experiment tried in UP and othersStates due to elect new assemblies next year is a question which all those keen to oust the BJP from the Centre must ask themselves.

An honest answer might lead to their redemption from saffron rule. 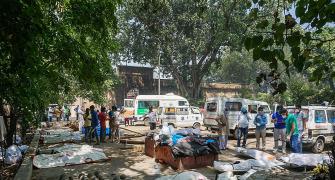 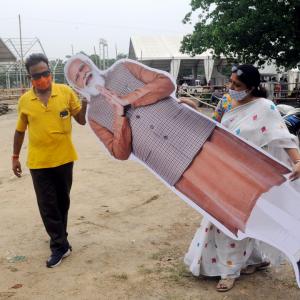