The cycle of violence resulting from the increasing criminalisation of politics cannot stop, will not stop, unless there is a wider political consensus against relying on criminal mafias for electoral purposes, argues Virendra Kapoor. 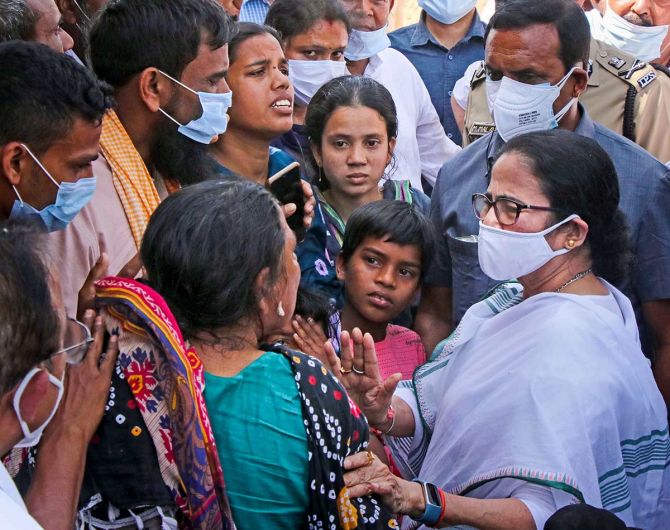 The gruesome Birbhum killings in West Bengal are set to remain in the national headlines for a few more days.

Politicians will go through the set-piece blame game, with the Trinamool Congress and the BJP raucously pointing finger at each another.

But, predictably, the barbaric assault and burning of men, women and children will soon cease to find public traction.

Politicians will move on to yet another, more current, event, so casual being their interest in breaking the criminal-politician nexus.

The cycle of violence resulting from the increasing criminalisation of politics cannot stop, will not stop, unless there is a wider political consensus against relying on criminal mafias for electoral purposes.

No party will risk marginalisation by weeding out those who run hafta rackets in collusion with the police and the politicians, extort money, intimidate law-abiding citizens and generally live off the earnings of multi-faceted crimes.

The police, supposedly the law-enforcing agency, are an equal and willing party to the illegal rackets run by the mafias with the tacit and often open sanction of politicians in power.

Though the criminal-politician nexus flourishes in every state, West Bengal particularly gained notoriety in virtually systematising the illegal arrangement.

Even in the case of the Birbhum killings, the police were reluctant to apprehend the main suspects until Chief Minister Mamata Banerjee herself intervened.

It should be noted that initially the Birbhum district president of the Trinamool Congress had sought to blame an electric 'short-circuit' for the fire which so mercilessly consumed nine lives.

How could the local police act and risk the wrath of the ruling party bosses by going after the perpetrators of the barbaric killings.

Another dilemma for the police was that both the victims and the alleged suspects were covenanted members of the ruling party.

Only a few months ago, they had brutalised members of the BJP when the latter lost a keenly contested assembly poll without the police lifting its little finger to stop the reckless reprisals against political opponents.

The Bogtui village bloodletting actually began with the murder of Bhadu Shekih, the TMC deputy chief of the local panchayat.

Bhadu begun life as a driver, but over the years developed contacts with the local police and criminals, graduating in 2012 as the TMC chief in his village. He found an able mentor in a senior political operative, one Angur Sheikh, who ran various crime syndicates in a cluster of villages.

The trouble started a year later when Angur's wife lost the panchayat election fighting on the Congress ticket.

The winner was Bhadu's wife who was the TMC candidate.

Soon, Angur was forced to leave the village.

The disciple had become the boss, shaming the mentor daily.

As it happens in most such cases, while the elected member of the panchayat took the backseat, her husband Bhadu Sheikh ruled in her name, expanding the network of land-grabbing, extortion, illegal toll from passing trucks and buses, and other acts in connivance with the local police and politicians.

His operations reportedly extended to the jurisdictions of three police stations.

The fight for supremacy between the rival gangs of Bhadu and Angur took a turn for the worse when the latter's brother was murdered a few years ago.

Bhadu was one of the suspects, but the police did not pursue the case given his TMC connection.

Bhadu now suspected that some of his gang members had shifted allegiance to the other camp.

And then Bhadu was murdered.

This triggered the savage killing of nine people, including women and two children, who as Mamata Banerjee on a visit to the crime scene suggested, were first tortured before being burnt alive.

But Mamata's show of anger against the police did not impress anyone. For, the local police found their hands tied given the political patronage enjoyed by the criminal gangs.

Of course, it is inconceivable that without sharing the proceeds of the crime with party apparatchiks the police would look the other way while criminal syndicates ran their extortion rackets.

Admittedly, the deep-seated cancer of criminalisation of politics at the village level took root during the uninterrupted 35-year-long Communist rule in West Bengal.

Even ordinary citizens had to pay money to avoid harassment.

Of course, the local police were at the beck and call of local CPI-M goons.

In 2011, instead of ridding the state of the endemic criminal syndicates that had prospered under the benign shadow of the Communists, these were welcomed with open arms by the new rulers.

Now if the Communists could win seven consecutive terms in power on the shoulders of local goons and mafias, Mamata Banerjee, now into her third straight five-year term, can aspire to beat the Communist record, never mind the challenge from the BJP.

Of course, the Birbhum savagery is a symptom of the rot that has gnawed at the very foundations of the Indian State.

No party is free from hosting people with criminal antecedents.

Compulsions of electoral politics oblige even well-meaning politicians to wink at the increasing role played by the mafias in mustering popular support.

The local slumlord arranges crowds for leaders' rallies and in directing bulk votes in their favour.

But this necessarily comes at a price.

Round the year the gangster gets protection from the police who become willing accomplices in his criminal operations.

No surprise then that some among the local goons themselves enter the political fray.

There is another unwritten rule among politicians. They rarely expose the criminal antecedents of one another, a kind of omerta.

Meanwhile, there is hope that the killers in Birbhum will be brought to book since the Calcutta high court has handed the probe to the CBI.

Hopefully, divisive politics over the charred remains of the victims will cease forthwith.