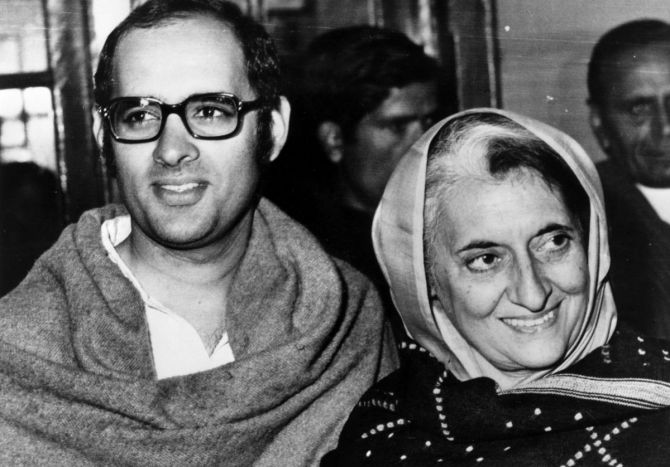 First things first. There can be no doubt that this is the best and most comprehensive book on the Emergency.

This will not surprise people who have followed the perceptive and intellectually rigorous work of Christophe Jaffrelot, who has now written India's First Dictatorship (Harper Collins) with his former student Pratinav Anil.

Most of us with an interest in politics know the broad outlines of what went on during the Emergency.

What is sometimes forgotten is that the phase left us with two lasting legacies.

One of them was the acceptance of dynasty as a fact of life in most political parties.

Indira Gandhi's naked promotion of her loutish son Sanjay as her heir apparent set the template for what was to follow.

When Sanjay was killed in a plane crash, Mrs Gandhi simply replaced him with her other son.

Political parties all over India followed her lead and turned into family businesses.

Soon it was taken for granted that leaders were born (into the right families) and not forged in the heat and dust of politics.

The second legacy is that the Bihar movement led by Jayaprakash Narayan, whose success resulted -- at least in part -- in the imposition of the Emergency, legitimised the Rashtriya Swayamsevak Sangh.

Till then, the Sangh had been treated with disdain and contempt by most political parties.

JP changed all that. He used the RSS to shore up his agitation in Bihar, going so far as to say that 'the Bihar movement and RSS's work are fundamentally the same'.

Later, write Jaffrelot and Anil, the Sangh Parivar gained a new legitimacy in 1975-7 because of its role in the underground resistance.

As L K Advani declared, the stigma of 'untouchability' has gone."

Without JP (and the Emergency), there would be no BJP (created in 1980), and certainly no mainstream Hindu nationalist politics. And, therefore, no Narendra Modi.

Apart from these often neglected legacies of that period, the book's essential theme is that the Emergency did not suddenly emerge out of nowhere.

Explanations that focus solely on Indira Gandhi's insecurity and paranoia miss the larger point: The authoritarian streak in Indian politics had been steadily growing long before the Emergency was declared.

Nor has it ever gone away. Perhaps, its influence has actually increased.

As the authors conclude, 'At a time when Hindu nationalist authoritarian populism is accentuating, in the manner that the Emergency did, the illiberal aspects of Indian democracy that have been present all along.... the task of putting Indian democracy to rights remains more pressing than ever.'

Indeed, the cliche that India is timeless comes to mind again and again in the pages of this book.

Consider Mrs Gandhi's view of her opponents: Traitors, anti-nationals, rumour-mongers. And, say the authors, 'student movements and peasant uprisings had either to be crushed or rendered impotent'.

Consider how sensitive the Emergency regime was to foreign criticism.

The foreign ministry was asked to deflect the critics. 'All embassies were asked to prepare a 'blacklist of undesirable Indians' against whom action could be taken -- passports impounded and scholarships rescinded.'

This didn't work, of course, and the ministry of external affairs fell back on put-downs that might sound familiar to readers of today's newspapers.

T N Kaul, the Indian ambassador to Washington, berated the US media saying that their criticism of authoritarianism in India was the 'knee-jerk reaction of a very free and affluent press'.

A desperate Mrs Gandhi then tried to mobilise the Diaspora to sing her praises.

She wrote to the MEA: 'India should use these people in its publicity drive in the same manner that Israel uses the Jews.'

Piare Lal Sharma, whom the book describes as the 'unannointed Congress court historian' and who had made his name with his 1970 opus World's Greatest Woman (no prizes for guessing who he was referring to), wrote a paean of praise to Sanjay entitled 'A Psychography of Sanjay Gandhi's Cosmic Mind: World's Wisest Wizard'.

It contained an immortal line about the title character's chest: 'About 36 inches when empty, when full it takes a very good expansion.' (to 56 inches, perhaps?)

This kind of flattery was par for the course.

As the authors write, there was 'only one good reason to go out in the streets: To support the Supreme Leader. Mrs. Gandhi played on nationalist sentiment, cashing in on that relatively non-ideological "ism": patriotism. It was always local saboteurs, fifth columnists and foreign powers who had it in for India'.

The regime's enemies may sound familiar too. Mrs. Gandhi routinely tore into the 'cynicism of the intelligentsia', dubbing its members 'one of the greatest obstacles' in the smooth governance of the State.

When Romila Thapar, historian at Jawaharlal Nehru University, became one of the few who refused to sign a panegyric on the regime, she had her income tax assessment for the previous decade reopened for questioning. 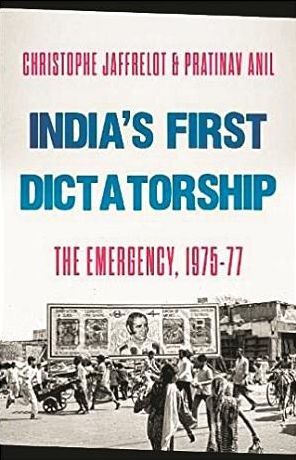 Before the Emergency was declared, the press was almost uniformly critical of Mrs. Gandhi.

When the Allahabad high court judgment, which held her guilty of electoral malpractice, was pronounced, nearly every newspaper asked her to quit.

'The Only Way' said The Statesman; 'The Only Course' editorialised the Indian Express; even the normally supportive Hindustan Times wrote 'A Time To Go'.

Mrs Gandhi did not go. She declared the Emergency. 'Freedom of the press has come to mean the freedom to attack Indira Gandhi,' she thundered, referring to herself, as megalomaniacs often do, in the third person.

This same press was quickly brought to heel (with some notable exceptions) during the Emergency and wrote articles about how wonderful Sanjay Gandhi was.

As L K Advani was to later say, asked to bend, the media crawled.

Is it all very different today? Have we learned the lessons of the Emergency?

Or does the spirit of the Emergency-era Indira Gandhi still rule India?

Jaffrelot and Anil leave one in no doubt about what their answer to that question is. 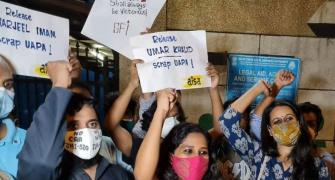 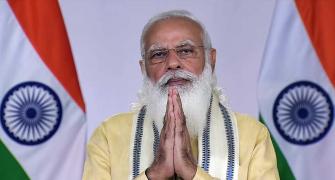 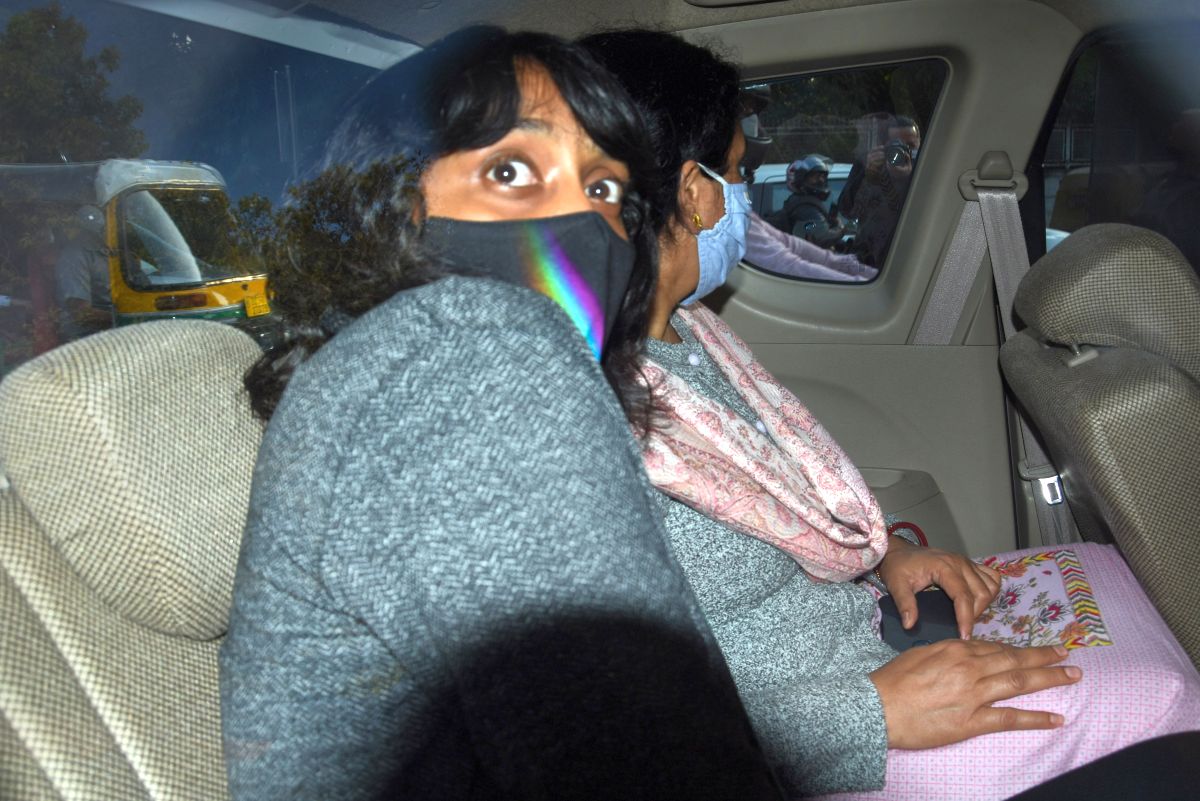 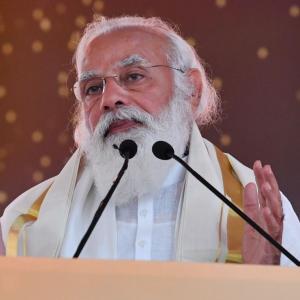