'Criticism of Uddhav suits the NCP perfectly.'
'NCP members head key ministries in Maharashtra like home, finance and health, yet as chief minister it is Uddhav who is criticised for the state government's shortcomings.'
'Few hold NCP chief Sharad Pawar accountable for the performance of NCP ministers,' argues Sanjeev Nayyar. 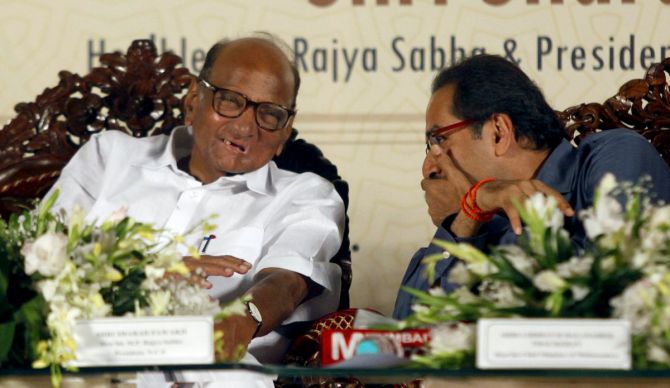 After Balasaheb Thackeray's death, the Congress and National Congress Party have been eyeing the Shiv Sena's loyal vote bank.

To crack it, they first propped up Raj Thackeray -- Shiv Sena President Uddhav Thackeray's cousin and bete noire) -- tacitly and during elections.

However, the Marathi manoos was smart enough to realise that Raj was being used to split the Sena vote so they returned to Balasaheb's Shiv Sena, which was now Uddhav's Sena.

But the fractured results of the 2019 state assembly election and Uddhav's refusal to play ball with the Bharatiya Janata Party gave the NCP the opening it was looking for.

Two, Uddhav became the face of the government, so brickbats, and praise, all went his way.

Thanks to the mismanagement of the COVID-19 crisis, the investigation into actor Sushant Rajput's death, drug allegations against Rhea Chakraborty and the spat with actor Kangana Ranaut, not to forget the attack on a retired naval officer, Uddhav and his Shiv Sena have been criticised harshly -- whether rightly or wrongly is for the voters to judge.

This criticism of Uddhav suits the NCP perfectly. NCP members head key ministries in Maharashtra like home, finance and health, yet as chief minister it is Uddhav who is criticised for the state government's shortcomings.

On the issues of Rajput's death and the Sena spat with Ranaut, Uddhav clearly bungled.

There was no need to be on the defensive over Rajput's death. Drugs are consumed across India (we all know that) and not in Mumbai alone.

Balasaheb's Shiv Sena would never have demolished an actor's office to settle scores. There are smarter and quieter ways to do that.

Perhaps Uddhav lacks the experience or emotions got the better of him. Shiv Sena spokesperson Sanjay Raut did not make life easier for the chief minister either with his constant utterances against Ranaut.

Calling Ranaut 'haramkhor' was wrong. Please understand that Maharashtrians's exposure to Hindi is limited. What little Hindi they know is mostly from Hindi films.

Even though Raut clarified later what he meant, the damage was already done with his comments flying all over news teleision channels.

Meanwhile, while the Shiv Sena's battle with Ranaut was at full throttle, Maharashtra's Home Minister Anil Deshmukh said the state government would probe drug allegations against her.

The timing of this statement could be construed as adding to the Sena's discomfort. When the state home minister makes a statement on an individual case, the public senses something is afoot.

As if this was not enough came the news of a retired naval officer being roughed up by Shiv Sainiks for sharing an Uddhav cartoon -- on a housing society WhatApp group, not on Facebook or Twitter.

Has Uddhav's Shiv Sena become so insecure and intolerant that a mere cartoon (Uddhav's father Balasaheb was a cartoonist) cannot be taken in its stride?

Balasaheb's Shiv Sena was violent too, but Mumbaikars tolerated it because the causes that Balasaheb espoused in the 1990s were nationalistic. Uddhav does not have his father's personality and has not taken up similar causes strongly.

It is anybody's guess if Uddhav will lose the votes of traditional Shiv Sena supporters because of aligning with the Congress and the NCP to form the government.

This potential loss of votes by the Shiv Sena suits the NCP perfectly because this has been its goal for years.