The sub-quota scheme may now lead to a ganging up of non-Vanniyars in individual constituencies against the Vanniyars just as in the past, such ganging up against SC-ST candidates was seen in the non-quota constituencies, says N Sathiya Moorthy. 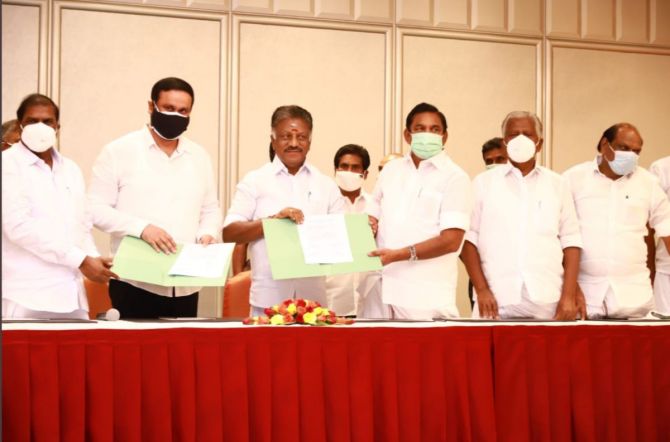 IMAGE: All India Anna Dravida Munnetra Kazhagam and the Pattali Makkal Kazhagam leaders seal seat-sharing agreement for the April 6 assembly elections in Tamil Nadu under which the PMK has been allotted 23 seats. Photograph: Courtesy, O Panneerselvam on Twitter.

If Prime Minister Narendra Modi was the sole issue for the Tamil Nadu voter in the 2019 Lok Sabha polls, two years down the line, in the state assembly elections due on April 6, he continues to hog the limelight -- but with ‘internal reservations’, induced by ruling All India Anna Dravida Munnetra Kazhagam ally in the state, as an add-on.

Barring the state Bharatiya Janata Party, which sticks to the ‘Modi imagery’,  no political party or leader is up to arguing for or against either, as the campaign begins heating up the early, southern summer.

Modi remained a subterranean issue, argued by the main DMK rival more as a political issue as and when each of his policies and programmes unfolded, but not as the possible decider in 2019. The list included demonetisation and GST (the latter hitting the industry even harder), lynching and other aspects of pro-Hindutva militancy -- the last one confined to the north of the Vindhyas. As the massive victory for the DMK-Congress combine showed, these issues subsumed the positive effect, if any, of the ‘surgical strikes’ and the like, with ease.

This time round, thus, the DMK under chief ministerial aspirant M K Stalin (MKS) is unsure if they have to go on the offensive against the Modi administration at the Centre and more so the perceived subservience of the AIADMK state government, under Chief Minister Edappadi K Palaniswami (EPS) and O Pannerselvam (OPS), the latter more than already. The alternative is for the party to leave it to the imagination of the ‘Dravidian voter’ to pitch them internally, one more time.

The irony for the DMK is that the EPS government has handed down another issue in the form of ‘internal reservations’ for the numerically-substantial Vanniyar community, concentrated in the north and also parts of the west. Here again, the alternative is for the MKS leadership to let the issue to work its way through castes, sub-castes and groups, or those that are presumably affected. The reason: The DMK too does not want to lose the traditional Vanniyar voters who have largely identified with the party from the ’50s.

The sub-quota issue has become possible after the EPS government hurriedly piloted a bill for apportioning 10.5 per cent of the existing 20 per cent quota for all identified MBC in the state. The 20 per cent quota, which itself was a sub-quota from the controversial 69 per cent in the state, was introduced by the late party chief minister M Karunanidhi, if only to take the wind out of the Vanniyar-strong Pattali Makkal Katchi early on.

Today, EPS has granted the 10.5 per cent sub-quota, anticipating trouble from prospective PMK ally for the assembly polls. This was after PMK boss S Ramadoss raked up the forgotten issue of 20 per cent quota demand for the community, only weeks earlier. The PMK has a proven 5.5-per cent vote-share in the state, which solidifies as 8-10 per cent in their concentrations. It’s a lot of votes for the AIADMK to lose, especially given the 41-40 per-cent vote-difference with the DMK in the victorious assembly polls of 2016.

Though hanging fire for weeks, if not months and years, Team EPS created what could be a Guinness record for any democracy, by piloting the sub-quota bill after the Election Commission publicised its decision to announce the poll schedule for five state assemblies that very evening and  the actual announcement followed -- a matter of five or six hours, including the lunch break for the state assembly that was in session. The government wanted to beat the commencement of the model code of conduct with the announcement of the poll schedule, which bars governments from announcing / commencing new initiatives until after the poll process is over.

The DMK-led Opposition was anyway boycotting the entire Budget session for other reasons. This meant that it only took the time for the government to pilot the bill and the house to pass it by voice vote. No discussions, no debates, no nothing. Governor Banwarilal Purohit too seemed to have found nothing amiss in the process, though the facts are not in his domain, and granted his assent to the bill, leading to it getting gazetted as law, all in a couple of days or so.

Needless to say, the governor’s assent and gazette notification came after the model code came into force.  This issue too may be agitated as the matter is now before the Madras high court.  The legal issues may also include the perceived violation of the Supreme Court verdict in the ‘Mandal case’, that ‘total reservations should not go beyond half the total’.

The question may now be applicable to sub-quotas, as a clutch of seven sub-sects going under the common title ‘Vanniya Kula Kshatriyas’ get 10.5 per cent of the total 20 per cent for all MBC. Under the law, no single / specific community, or sub-sect, should be entitled to any reservation, internal or otherwise, hence the seven sub-sect clubbing.

The PMK seemed to have been overwhelmed by the initiative, and accepted the lowest ever 23 seats in a total of 234, for the party in any alliance arrangement, whether led by the AIADMK, DMK or the NDA. In doing so, party founder Ramadoss and his son, Anbumani Ramadoss, former Union minister, seemed to have eschewed all the negative propaganda they had launched personally against EPS since he became chief minister.

That one is only for the social media, as the PMK votes otherwise are ‘transferrable’, as directed by the leadership from one election to the next. It is another matter that the party had lost the additional community votes that had begun travelling towards it, in between. Those were among the general class of ‘swing voters’ and had hoped for a permanent alternative to the DMK and the AIADMK. Once the party failed them, they also moved away, to choose their Dravidian favourite of the season.

But the current problems for the PMK and the AIADMK seems to be flowing from other facts on the ground. The new law has allotted 7.5 per cent ‘internal reservations’ for what are known as ‘De-notified Communities’ from the remaining 9.5 per cent in the overall 20 per cent, and the residual 2.5 per cent for the residual MBC. The problem here is that tens, if not hundreds of sects and sub-sects fall under these two categories, though their population figures too are also small. But the comparative number of sub-sects coming under each of these three lists has created an impression that the Vanniyars have unduly gained.

In turn, and even without this, the sub-quota scheme may now lead to a ganging up of non-Vanniyars in individual constituencies, against the Vanniyars. In the past, such ganging up was restricted mostly to SC-ST candidates, if any, in the non-quota constituencies in the state. These two groups have got a reserved 45 seats in the assembly, and that is saying a lot.

Interestingly, EPS told the assembly that it was only a temporary arrangement. Adjustments will be made on the basis of the recommendations made by the Justice A Kulasekaran Commission, set up only weeks earlier, to identify caste groups and their numbers, within six months. A new government would be in office by then. If it is not an AIADMK government, the fate of the commission itself may come under question.

In political terms, the Kulasekaran Commission was set up to placate the PMK after they launched the first of a series of promised public protests. Legally, it was a long-pending requirement, for the state government to justify its 69-per cent reservation policy, for the Supreme Court to grant ’exemption’ from the 50 per cent upper-limit set under the Mandal verdict (Indra Sawhney vs Union of India, 1992). The SC has since decided to delay hearing until after a Constitution Bench had cleared a pending case from Maharashtra. The court refused to refer the Tamil Nadu case to a Constitution Bench.

As an aside, experts point out how the Vanniyar community may actually stand to lose from the internal reservations scheme, if the figure is not 20 per cent, as originally demanded by the PMK. According to them, for district-level appointments at the middle and lower levels in the four or five districts where Vanniyars have a substantial presence, they now corner around 12-15 per cent or even more, by the sheer size of their numbers. Under the new law, if extended to employment, could actually affect the community, they surmise.

Yes, the 10.5 per cent reservations is only in education -- at least for now. But the public perception has been built up that it is also for jobs. This could cut in multiple ways. For one, insiders say, Vanniyars do not necessarily need sub-quota in reservations especially for professional admissions -- where they do not apply after NEET for medicine and CEE for engineering, apart from a similar exercise for law admissions, as well. The sub-quota will help them only if applicable to jobs.

There is a possible reverse effect, too. Though critics blame EPS for cutting the size of the cake-piece for the non-Vanniyar community groups in the 20 pc MBC list, the rest now stand to get more in the Vanniyar-dominated districts. Given its strong grassroots-level organisation, the AIADMK could start off a whispering campaign among local community groups that the cunning EPS had fooled the PMK, to give others a greater piece of the cake.

This could prove to be a double jeopardy for the DMK, as they cannot criticise the AIADMK rival for granting exclusive 10.5 per cent quota to the Vanniyars and lose the community’s existing vote-share for the party. Unless, of course, the party too launches a whispering campaign, telling the Vanniyars that they have actually been ‘cheated’ on job quota, as already EPS has ‘cheated’ them on higher education by endorsing and promoting NEET, at every turn.

They may then have to tell the non-Vanniyars who get the 9.5 per cent residual quota, that they (too) have been ‘cheated’, as the socially-dominant Vanniyars were getting greater official recognition than already. But all of it would have to be a sub rosa affair, away from the media glare. Both parties have the cadre strength to do it, but the question is between the two, who has a greater leadership morale at the second and third tiers, to facilitate the process.

Otherwise, the BJP, having fielded a Dalit-Arunthathiyar as state party chief, hopes to swing all Dalit votes across the state in the NDA’s favour. This again can cut both ways, as non-Dalits, especially in the Arunthathiyar-strong western region. could ‘gang up’ against the combine, even in non-quota seats in the poll. The West is a traditional stronghold of the AIADMK since inception, and also of the BJP, post-Coimbatore serial-blasts, 1998.