BJP’s overwhelming win in UP shows that 2014 was no fluke, says R Jagannathan. 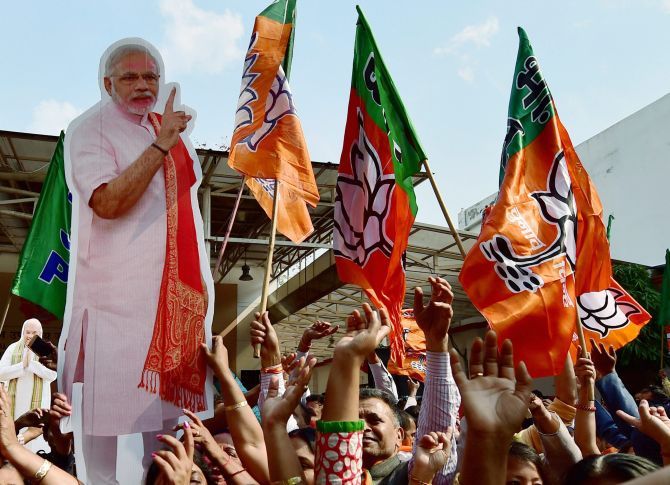 Image: BJP workers carry a giant cut-out of Prime Minister Narendra Modi as they celebrate the party’s victory in the UP and Uttarakhand assembly elections, at the party headquarters in New Delhi on March 11, 2017. Photograph: Manvender Vashist/PTI Photo.

There is always a tendency to read too much, or too little, into poll verdicts. But even with this caveat, it is difficult to not be swayed by the scale and sweep of the Bharatiya Janata Party’s victory in Uttar Pradesh and Uttarakhand, its spectacular rise in Manipur, and its ability to stay in the fight in Goa despite splitting from its erstwhile partners and an internal revolt.

In Punjab, where the defeat of the Akali-BJP coalition was foretold, the development worth noting is not the Congress’s thumping victory, but the underwhelming performance of the Aam Aadmi Party.

In terms of popular vote, the Akali-BJP combo was streets ahead of the AAP, despite coming a cropper in terms of seats.

The implications of the verdict are the following.

Narendra Modi retains a strong hold on the popular imagination, and his party is the primary pole of Indian politics, at least till 2019 proves us otherwise.

The Congress is a declining force, and the Gandhi family is clearly not up to the challenge.

If the BJP has to be humbled, it can only be through an all-encompassing alliance of other major parties, as we saw in Bihar, but not quite in UP. Reason: Modi has broken through the clutter of caste, class and community, and overlaid it with the logic of broad aspiration.

Demonetisation, which alienated a core BJP constituency (traders), has ensured a larger base among the poor, who saw in it a demonstration of Modi’s commitment to go after the corrupt rich.

Modi is now backed by a broader coalition of aspirational castes, a kind of mild Hindu vote consolidation. This is the only thing that can explain the total eclipse of Mayawati’s Bahujan Samaj Party, not once, but twice -- in 2014 and now.

But even as we look at the larger meaning of the verdict, a quick summary of the mandate in each state would be useful.

By far the big message is from Uttar Pradesh, which was the biggest contributor to the BJP’s victory in 2014.

The state has always played a large role in national politics by virtue of its contribution of 80 seats to the Lok Sabha.

By winning a three-quarters majority in the assembly, the BJP has demonstrated that the 2014 win was no fluke.

The state is probably tired of playing second fiddle in national politics, with regional parties frittering away their energies in narrow caste and communal politics.

This time the state voted for a national party with a vengeance -- and UP is back to the centre-stage of national politics.

The question is, how did Modi and Amit Shah do it?

The answer is complex and needs elaboration. It combines two opposites -- the politics of exclusion and inclusion in UP.

The MY (Muslim-Yadav) formula of the Samajwadi Party and the Dalit-Brahmin combo of the Bahujan Samaj Party (in 2007) are essentially exclusionary in nature, since they eliminate other castes from a share in power.

Since you don’t need more than 30 per cent of the vote to win power in a multi-horse race under a first-past-the-post system, two or three large groups can hijack the state to the exclusion of the rest.

The BJP-led coalition this time included the excluded OBC castes. Not surprisingly, it aggregated nearly 40 per cent of the vote.

Contrast that with the Samajwadi Party’s majority in 2012 with less than 30 per cent of the vote.

But the BJP currently excludes Muslims. For a sustainable future in UP, the party needs to fix this gap as soon as possible.

If it does that, it will be the dominant party of India for the foreseeable future.

If it does not do that, it is not difficult to predict a Bihar-style Mahagathbandhan seeking to defeat it in 2019.

Uttarakhand needs no elaborate analysis. A simple mix of anti-incumbency and the Modi magic has worked wonders.

The fact that the state provides a disproportionate share of soldiers to the Indian armed forces helped. The surgical strikes were a matter of pride here, and so was OROP (One Rank One Pension) -- which has benefited more retired soldiers than it has upset.

Even in Punjab, what needs elaboration, is not the Congress’s victory, but AAP’s abject meltdown. The scale of the Congress’s win is exaggerated by seat count, but the underlying reality is that the vote was not only against the Akali-BJP government (anti-incumbency) but also against AAP in some way.

The exit polls gave AAP near parity with the Congress but in the final seat count, its seat tally is in the low-20s, less than a third of what Amarinder Singh got for the Congress.

This outcome can only be explained by the possibility that a chunk of the Akali-BJP base voted tactically for the Congress to keep AAP out, once they realised that their own parties weren’t going to make it.

This is also obvious from the vote share, where Congress got around 38 per cent, Akalis 25 per cent, BJP five per cent and AAP 24 per cent. AAP was No. 2 in the vote count despite fielding candidates almost everywhere. Arvind Kejriwal needs to analyse why his ship foundered so close to the shore.

The BJP has reasons to worry about Goa, which has given a hung verdict, and its chief minister was humbled by being defeated in his constituency. Clearly, in smaller states, leadership counts as much as the overall popularity of the party.

But the party remains a viable force.

Kejriwal should worry more. His party came fifth in terms of vote share, with just over six per cent.

In Manipur, once again, while the results show a hung assembly, the point worth underscoring is that the BJP is a rising force in the north-east, with Manipur being only the latest exhibit. It was No. 1 in vote share.

Till now, the big question was: How will BJP win in 2019, when it is impossible to repeat its overwhelming win in UP, which contributed a fourth of its Lok Sabha seats?

Its thundering win in UP now shows that while the NDA may not get 73 seats from UP, it will not fall far short either.

Not when it is gaining elsewhere, including the north-east.

The author is editorial director of Swarajya magazine.