Besides the polarisation in favour of the BJP, there could be other reasons for the under-representation of Muslims in the UP assembly, says Shafeeq Rahman. 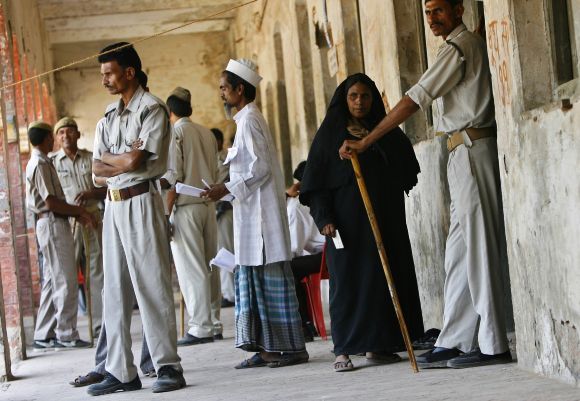 The absence of Muslim names from the Bharatiya Janata Party’s candidates list and allocation of 100 tickets to Muslims by the Bahujan Samaj Party had foretold well before the election results that these parties’ performance would determine the shape of Muslim representation in the new Uttar Pradesh assembly.

The BJP’s massive victory, winning 321 seats, has obviously reduced Muslim representation to its lowest level in the state after the year 1991. The division of votes between the Samajwadi Party-Congress alliance and BSP further marred the prospects of adequate representation for the community.

The newly-elected assembly has only 24 Muslims, marking a 5.9% representation in a house of 403, much lower than their 19% composition of the state’s total population.

The last assembly had 69 Muslim members (a 17% representation, close to their share of population). The representation of Muslim women is also at its worst; not a single member despite their 9% share in the state’s population.

Muslim representation in the western region (10%) is above the state’s mean, but Awadh and the eastern region have only 4% representation each. Bundelkhand has a negligible presence of Muslims (7%), so no Muslim was elected from the region.

Interestingly, some districts with a lower population ratio have succeeded in sending more Muslim MLAs. The Muslim share in Azamgarh district is only 15.6% but their representation level is 30%, with the election of three Muslim MLAs from the district.

Bareilly and Balrampur are among the most disappointing districts, with both not electing a single Muslim representative in this election despite having a Muslim population of 38% and 35% respectively.

Literacy and awareness could have played an important role towards political empowerment, as Azamgarh with 77% literacy rate is among the top Muslim literate districts in the state, whereas the Muslim literacy rate in Bareilly and Balrampur are 47% and 48% respectively, according to the 2011 estimates.

Moradabad and Rampur, with a literacy rate of under 50%, achieved an appropriate representation for the community.

The highest number of Muslims (17) was from the Samajwadi Party, constituting a 36% share of the party’s 47 MLAs. The BSP, which put 100 Muslim contestants, was able to win only 5 seats for them, a poor strike rate of 5%. Out of seven Congress winners, two are Muslim. In spite of mounting a hyped-up campaign, Muslim parties like the All India Majlis e Ittihadul Muslimeen, Peace Party and Muslim League failed to secure a single seat.

Besides the polarisation in favour of the BJP, there could be other reasons for the under-representation of Muslims too, like intra-caste tussles in the community, mainly in the western region; multiple Muslim candidates in areas with a concentration of the community; low poll percentage among Muslims; the poor performance of sitting Muslim MLAs; and the lack of universal acceptability of Muslim candidates among other communities.

The positive from this election is that most of the elected members are grass-root leaders who have won due to their own image. Hopefully, they would perform well, ensure the welfare of their constituency and try to fulfil the community’s expectations.

Here’s an analysis of the level of their representation in the last two assembly elections, across districts and regions of the state with a Muslim population above 20%: