Two deals but many lessons 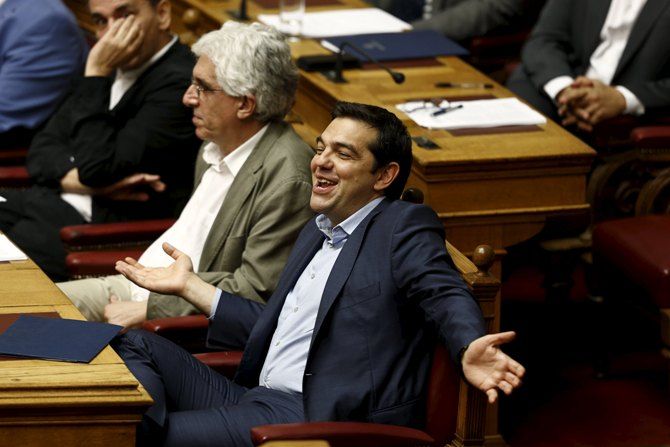 Both the Greek and Iranian deals are extremely imperfect and fraught with uncertainty, says Claude Smadja.

It does not happen frequently: Two big agreements in one week.

What could make analysts happier?

The agreement among the leaders of the euro zone on the Greek crisis came on Monday July 13 after a harrowing 17-hour meeting; the one between Teheran and the group of six led by the US on the Iranian nuclear programme was achieved on July 14, after repeated deadline extensions and a roller-coaster of optimistic/tense moments.

Both deals are extremely imperfect and fraught with uncertainty.

However, a solid case can be made that each is the best that could be achieved, and that any other alternative -- Greece exiting the euro, or reviving the military option to stop Iran’s nuclear programme -- would have been much worse.

In fact, what will make these two agreements successful -- ie, positive for the future -- is their implementation and the lessons that are drawn.

In the case of the deal on Greece’s bailout, many hurdles have still to be overcome: Greece’s parliament has to vote on all the measures imposed on Prime Minister Alex Tsipras -- many of them anathema to him and his party.

And then the 'troika' (the ECB, the European Commission and the IMF) will have to negotiate with the Greek government the precise terms of the new 86 billion euro plan to Athens -- and those terms will have then to be agreed by the German parliament.

This is not a done deal.

Even if these steps go well, implementation has a chance of success only if both parties understand some basic points.

The Greeks have to, at long last, wake up to the fact that if they want to remain a member of the EU they urgently need to adjust their economic structure, their governance, and their mindset to the requirements of the 21st century.

The creditors led by Germany have to admit that their insistence on overnight reforms as well as the continuation and even aggravation of extreme austerity -- alongside the refusal of any serious debt relief -- are a recipe for continuous disaster.

Even in Germany, it took most of the two terms of Chancellor Gerhard Schröder to reform the labour market and the pension system -- and Angela Merkel has undone some of these reforms for electoral purposes.

To demand additional austerity from a country which has lost 23 per cent of its GDP over the last five years smacks either of sheer economic blindness or of a pseudo-moralistic notion of 'redemption through pain'.

Last but not least, even the IMF now recognises the need for significant debt relief.

The 'pretend and extend' practice of continuing to lend to Greece so that it can mostly pay the interest of its debt is just digging a deeper hole for the country to sink in.

In terms of lessons to be drawn, the Greek deal would prove to be a very bad one for the future if the Germans were to conclude that this time they got 'only' 80 per cent of what they wanted and that next time they will just push harder to fully enforce the Berlin consensus.

It is also very bad for the credibility and stability of the euro zone that the German finance minister Wolfgang Schauble was speaking of Grexit as a solution and advocating a five-year euro zone 'time out' for Greece.

However, the Greek deal could prove to be a positive one if the right lessons are drawn from it: Berlin must recognise the risks of pushing too ruthlessly for a Europe run on the German model and of bullying other countries into submission.

This creates resentment in many parts of the continent. France should also recognise that, despite President Francois Hollande’s laudable efforts, Paris only partially able to contain the German-led onslaught.

This should prompt the French to pull themselves by the bootstraps and get really serious about doing what it takes to strengthen their economy -- to rebalance the relationship with Germany and avoid Europe being definitely dominated by Berlin.

A 'German Europe' would not be good for Europe’s future.

Turning to the agreement between the six powers and Iran, it will also need to pass the hurdle of approval by the US Congress.

Then, it will be the same story as for the Greek deal: Implementation and lessons to be drawn.

With respect to implementation, success requires two conditions: The first is ruthless scrutiny to ensure that Teheran fully fulfills its part of the provisions curtailing its nuclear potential. President Barack Obama was right pointing out that “this agreement is not built on trust; it is built on verification”.

But the challenge will be to make the verification process continuously waterproof, not just during the first years.

It is very doubtful that the hardliners in Teheran will forgo their nuclear ambitions. Even assuming the good faith of the moderates in abiding by the terms of the agreement, the probability of cheating will remain very high for the foreseeable future.

The second condition is to maintain cohesion among the group of six countries that signed the deal with Iran, to maintain the Damocles’ sword, of a “snapback” of sanctions, above the heads of the Iranian leaders.

This will be difficult: Russia and China, holding a veto at the UN Security Council, might see things differently if and when the need for snapback arises. In addition, international corporations are already falling over themselvesin their rush to Tehran, scouting for deals.

In terms of lessons to be drawn, the wrong one would be to see this agreement as opening the way for a broader accommodation with Teheran.

This is not going to happen for the foreseeable future. Its supreme leader, Ali Khamenei, was prompt to signal that Tehran will continue to support its friends -- Hezbollah in Lebanon, the regime of Bashar al-Assad in Syria, the Houtis in their insurrection in Yemen, its allies in Iraq. Ayatollah Khamenei will not relent in his animosity towards the US and Israel.

President Rouhani may sound more conciliatory, but the supreme leader has the last word when it comes to Iran’s strategic objectives.

The right lesson would be for the Obama administration to strengthen the strategic and security relationship with the Gulf monarchies and Egypt, and to try to go beyond the hard feelings towards Israeli Prime Minister Binyamin Netanyahu -- even if he bears great responsibility for the present state of affairs between Washington and Jerusalem.

That is necessary for a coherent containment policy towards Iran.

Containing Teheran’s ambitions and the spreading of its influence and power in the region may have become an even more pressing necessity.

Otherwise, for all the celebrating of the deal with Iran as a “historic” one, it might end up creating more tensions and chaos in the region.