News
Business
Movies
Sports
Cricket
Get Ahead
Money Tips
Shopping
Sign in  |  Create a Rediffmail account
Rediff.com  » News » Can NaMo be halted in the Hindi belt?

'The foundation of the 2014 triumph was Narendra Modi's appeal to voters in the Hindi belt. The Bihar Vidhan Sabha polls will demonstrate if he continues to appeal to them,' says T V R Shenoy. 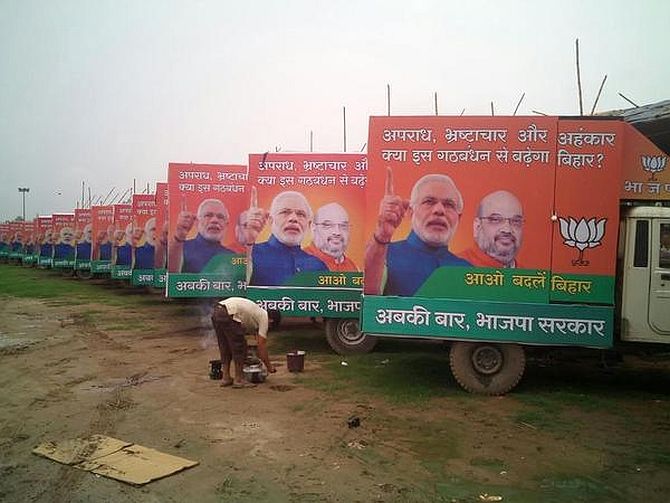 Let us talk about Bihar, Bengaluru, and brouhaha.

That last named refers to the ongoing disruption of Parliament. What we have is a tyranny of the minority; a party smashed in the Lok Sabha polls is trying to use its existing status as the largest party in the Rajya Sabha to bring Parliament to a halt.

The Congress started by adopting the most extreme position possible, that of asking for Sushma Swaraj's resignation without even the whisper of a discussion in either House.

It is easy to understand why; both Sonia Gandhi and Rahul Gandhi are poor speakers who would cut a sorry figure in open debate. But, having adopted that stance, it is impossible to withdraw without massive loss of face.

So, how will it end? The Congress claims to be speaking for the people. At least some of those people shall soon speak for themselves -- first through municipal elections in Bengaluru, then in Bihar's Vidhan Sabha polls.

While they are 'just' municipal elections, the August 22 polls for the Bruhat Bengaluru Mahanagara Palike, BBMP, loom large for the BJP, for the Congress, and even, to an extent, for the Aam Aadmi Party.

They are important for the Congress because that party is in power in the state. Karnataka is the largest state that still has a Congress chief minister, and Bengaluru -- should the party wrest power -- shall be the largest city to side with Rahul Gandhi's party. (The corporations -- not to mention the state governments! -- in Delhi, in Mumbai, in Chennai, and in Kolkata have long since moved out of the Congress orbit.)

Finally, it is of some relevance to the Aam Aadmi Party if Arvind Kejriwal's men want to prove that they can win votes outside the Punjab-Haryana-Delhi belt. Given the incompetence and sloth that mark the BBMP, the city of Bengaluru should have been a prime target for the Aam Aadmi Party, but the Kejriwal administration in Delhi hasn't exactly set the Yamuna on fire.

The defeatism in the Congress became clear when the Siddaramaiah ministry rushed the Karnataka Municipal Corporations (Amendment) Bill, 2015, through the legislature. This innocent-sounding amendment splits the BBMP into five zones. The Congress then tried to use the rearrangement as an excuse to postpone polling -- upon which the Supreme Court ordered the Siddaramaiah government to hold elections before the end of August.

However important it may be to win India's infotech capital, the bigger prize is Bihar.

Elections are about arithmetic; governance is about chemistry. It makes perfect sense for Lalu Prasad Yadav and Nitish Kumar to patch up after twenty years of abusing each other, and draw in the Congress too. (Rahul Gandhi's party has been out of power for slightly over a quarter of a century, and the new alliance represents its best chance of getting a seat at the ministerial table in Patna.)

In any case, what do the JD-U, RJD and the Congress have to lose?

The stakes are higher for the prime minister. The foundation of the 2014 triumph was Narendra Modi's appeal to voters in the Hindi belt. The Bihar Vidhan Sabha polls will demonstrate if he continues to appeal to them.

They may also be the last chance for the BJP to celebrate. Three major states -- West Bengal, Tamil Nadu, and Kerala -- will elect new assemblies in 2016, but the BJP has no chance of winning power in any of them. That leaves the smaller state of Assam as the only place where the BJP can hope to do well in 2016.

If the BJP fails to win power in Bihar, an energised Opposition shall do all it can to bait the Modi government. The GST Bill is already in limbo, and the proposed amendments to the Land Acquisition Act are virtually buried. Lose Bihar, and any reform that requires Parliament's sanction will grind to a halt.

2014 was a year of unparalleled triumph for the BJP, winning a majority in the Lok Sabha, getting chief ministers in Maharashtra, Haryana and Jharkhand, and even winning a share of power in Jammu & Kashmir. It was also a year of mounting disasters for the Congress (and the non-BJP Opposition at large).

2015 is a chance for the Congress to reverse its fortunes, to renew itself in the largest state that it still controls, and to stake a claim to the urban voters who deserted in 2014. It is also a chance for a united Opposition to halt Modi in the Hindi belt. 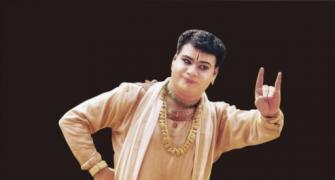 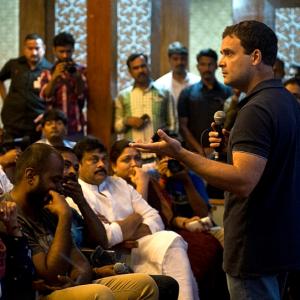