'Whether it was a habitual expression of post truth or an open offer to India and Pakistan, even Imran Khan could not have believed it,' says Ambassador T P Sreenivasan. 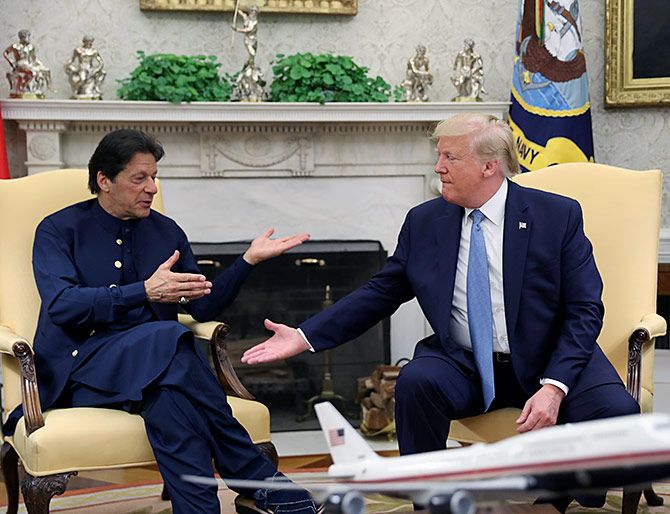 President Donald J Trump's explicit statement in Pakistan Prime Minister Imran Khan's presence in Washington that Prime Minister Narendra Damodardas Modi had invited him to mediate or arbitrate between India and Pakistan on Kashmir created a flutter till India made it clear that there was no truth in the claim.

Those who have been keeping an eye on President Trump's lies have calculated that he has exceeded 10,000 terminological inexactitudes, otherwise known as lies.

Whether it was a habitual expression of post truth or an open offer to India and Pakistan, even Imran Khan could not have believed it.

Mediation between India and Pakistan is a dream of all those who aspire to winning a Nobel Prize for Pease as anyone who can find a formula to end the standoff between the two nuclear armed neighbours is a sure winner of the coveted honour.

But, after the Tashkent fiasco, in which India lost then prime minister Lal Bahadur Shastri, who was stressed out under pressure from the mediators to make concessions to Pakistan, we have decided that no third party involvement will be permitted.

This was further strengthened by the Simla Agreement, which stipulated that neither side shall internationalise bilateral issues.

But despite all these, several world leaders, particularly secretaries general of the United Nations and US presidents have repeatedly expressed willingness to mediate between India and Pakistan.

While Pakistan encourages these moves, India has categorically rejected them.

Taking India's sensitivities into account, world leaders now say they are willing to use their good offices if both the parties agree.

We must admit that many countries genuinely misunderstand the Indian position because we tend to brief them whenever there are terrorist attacks or major incidents on the border and urges them to impress upon Pakistan the need to abandon cross border terrorism as a policy and to establish peace in South Asia.

Moreover, Jammu and Kashmir is shown as a 'disputed territory' on UN maps.

Visiting Pakistan prime ministers in Washington are known to have only India on their agenda.

Then US senator Jesse Helms, as c hairman of the Senate foreign relations committee, introduced then Pakistan prime minister Benazir Bhutto to the senate as the 'prime minister of India' after an hour long conversation with her in his chamber.

When the whole house burst into laughter, Helms apologised and said, 'It is entirely her fault. During our long conversation, she spoke only about India and not a word of Pakistan.'

It is quite possible that Imran Khan did the same to Trump.

Among the UN secretaries general, Boutros Ghali used to take pride in the fact that he knew both the Indian and Pakistani leaders very well and he would find a solution if only India had agreed.

He used to say this to visiting Indian delegations, who would politely nod and say nothing.

On one occasion, when Ghali said he was willing to mediate, an Indian minister of external affairs told him that India would welcome such an initiative, perhaps absentmindedly.

Ghali was taken aback and asked our permanent representative whether there was any change in Indian policy.

The Indian permanent representative went to the extent of giving in writing to the secretary general that the minister was misunderstood.

The problem with third party mediation is that such mediators tend to ask both sides to compromise for the sake of peace and security without considering the merits of the case, as it happened in Tashkent.

Since India is categorical that J&K is an integral part of India and the only concession possible is declaring the Line of Control as the international border, we believe that any mediation will only harm and not help our interests.

Pakistan is aware of this and raises mediation only to convince the world that India is rigid and unreasonable.

If Trump is looking for the Nobel Prize, he should focus on getting the North Koreans to denuclearise themselves. 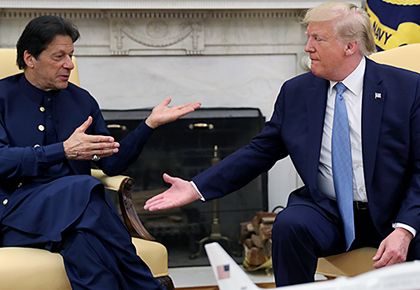