'Information about the Dalai Lama's heath is normally not shared with the public. Its release on this occasion implicitly underscores the message that the window of opportunity for Beijing to recommence the dialogue with the Dalai Lama -- an advocate of non-violence -- to resolve the contentious Tibetan issue is limited.' says Jayadeva Ranade. 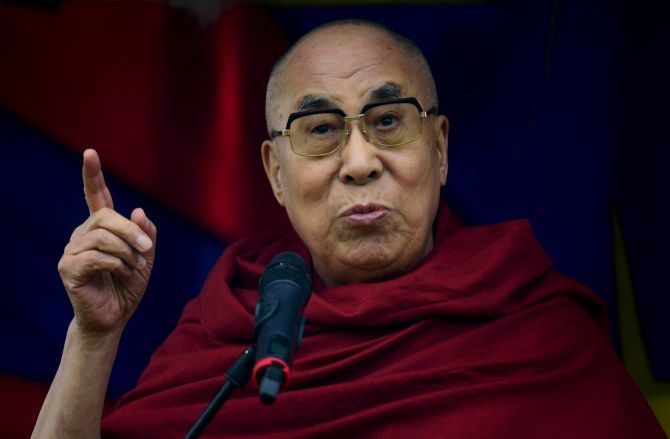 The developments of recent months confirm that the moves centering on the Tibet issue, initiated by the Dalai Lama and his establishment and independently by China's Communist regime in Beijing, continue to maintain their momentum.

The publicity given to reports of the Dalai Lama's ill health is suggestive of this. The public disclosure following a medical check-up while on a tour to the US in late September, that the Dalai Lama had been advised to cut short his programme and return home and that he had cancelled his engagements for October was unusual.

Information about the Dalai Lama's heath is normally not shared with the public. Its release on this occasion implicitly underscores the message that the window of opportunity for Beijing to recommence the dialogue with the Dalai Lama -- an advocate of non-violence -- to resolve the contentious Tibetan issue is limited.

Another important event with potentially long-term implications were the elections held in October, when the Tibetan Diaspora elected the temporal leader, or Sikyong, of the exiled Tibetan community. While Lobsang Sangay, the incumbent Sikyong, was comfortably re-elected with a huge margin, the elections conveyed two important and additional messages.

First was the candidature of Lukar Jam who represented the so-called Rangzen, or 'Independence', faction among the Tibetan community. His candidature was actually a challenge formally posed for the first time by those who are questioning the usefulness of the 'Middle Path' policy advocated by the Dalai Lama.

The Rangzen advocates full independence and does not favour talks with the Chinese authorities. It was also the first time that the Rangzen's demand for 'full independence' was conveyed to the broader exiled Tibetan community on a platform approved by the Dharamsala-based administration of the Tibetans in exile.

Second, and equally significant, were the results obtained by Lukar Jam. Despite his representing a faction not viewed favourably by Dharamsala, he emerged as one of the four prominent candidates in the electoral contest in almost all 60 constituencies.

His popularity is indicative of the quietly increasing resonance that Rangzen's demands have acquired. It is pertinent that this faction, which appears to be gaining ground, mainly comprises younger Tibetans many of whom are educated.

While there was little expectation that Lukar Jam would win, he nevertheless secured a surprising 28.5 per cent of the total votes cast. In many of the constituencies in India and abroad he often ranked second or third among the list of candidates, indicating fairly widespread support.

The results highlight that many Tibetans, and especially Tibetan youth, have been able to steadily garner support for the concept of 'full independence' though this is not advocated by the Dalai Lama.

Noteworthy too is that Lukar Jam received a lot of support from Tibetans settled abroad. The results portend that these sentiments could grow in the near future with the potential to pose serious problems.

The Chinese Communist Party in Beijing too is pushing ahead with its agenda of trying to claim and project its 'leadership' of Buddhism. China's efforts to elicit wider acceptance of the Chinese-nominated Panchen Lama, Gyaltsen Norbu, among Tibetans and the Buddhist community have continued.

In August he was taken to visit the Labrang Tashikhyil monastery, one of the great monasteries in the Gelugpa tradition, in the Labrang area of eastern Tibet (Amdo). An earlier attempt in July had failed due to opposition. The meeting between him and the head of Mongolia's Buddhist Association in July was also publicised.

China recently held its Fourth World Buddhist Forum in Wuxi near Shanghai in Jiangsu province on October 24-25, where China's official media publicised that over a thousand Buddhist personages from 52 countries and regions attended thereby 'fully reflecting the WBF's internationalism and authority.'

The Chinese media asserted that the number of those attending the WBF exceeded that of all previous years. As on previous occasions, Gyaltsen Norbu, the Chinese-nominated Panchen Lama, was given a prominent position at the Forum in an attempt to give him some legitimacy and authority. Predictably, the Dalai Lama was not invited.

The Chinese media highlighted the Chinese-nominated Panchen Lama's interest in Buddhism and the Buddhist religious orders. His remarks during a discussion at the Fourth WBF, where he urged compliance with the Chinese Communist Party's policies, were publicised. 'We have some thoughts on how to enforce regulations on precepts... especially how to better restrain young monks and living Buddhas from breaking them,' he stated. He asked young monks to 'decide what kind of role Buddhism can play in society,' adding, 'we should build a defence for them from both the level of faith and the level of regulation and system.'

Gyaltsen Norbu alluded to the need for monks to obey the Chinese Communist regime, saying that 'roaming monks not based at any one temple are particularly prone to breaking precepts. It would also be difficult for any other authority or the police to seize them if they do not break the law.'