'The situation was virtually gifted to Burhan Wani and if for some reason he were not to be around to step into the frame, the compulsion of circumstances would necessarily have found a "Burhan".' 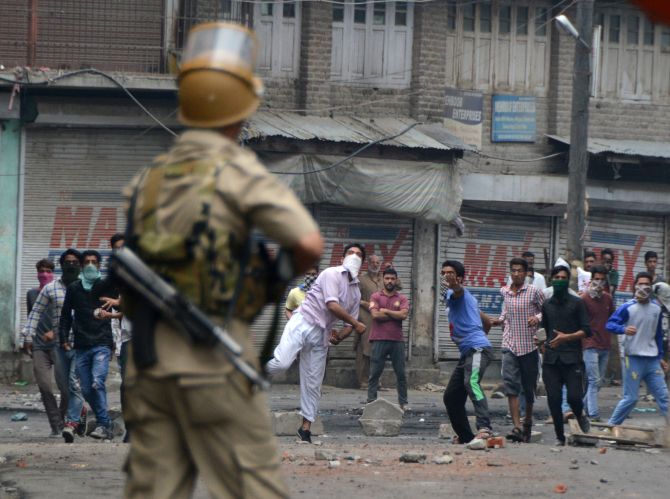 The inevitable long range consequences of Hizbul Mujahideen 'commander' Burhan Muzaffar Wani's killing, in a security forces operation in South Kashmir on July 8, are unpredictable, even as its immediate bloody aftermath continues to reverberate across the length and breadth of the valley, taking a heavy toll of human lives.

As of now, the lengthening shadow of 'Shaheed' Burhan over the Kashmir landscape largely resembles both, in scale and intensity though not in context, the momentous fallout of events way back on July 13, 1931 when 21 Kashmiri protesters, demonstrating against autocracy, were gunned down by the Maharaja's forces outside Srinagar Central Jail.

Whether and how, eventually, this analogy plays itself out in the days and months to come is hazardous to predict now. But play it will.

For sure, things on the ground are not going to be the same here on.

For one, Burhan's immensely popular public image lends him a larger-than-life profile across the board.

Its political implications will undoubtedly crystallise. Its shadow overhangs both, mainstream and separatist political spectrum.

It also cuts across generations, though manifestly spearheaded by 22-year-old Burhan's own youthful generation.

His antecedents add to his appeal: Burhan stood out as a charming, daring homegrown 'freedom fighter' in an arena, otherwise overshadowed and dominated by Pakistani-origin militants.

Although there are virtually no known or reported 'striking' terrorist actions in his name, his rebellious self-projection on social network succeeded in elevating him to a cult figure.

Now with his death 'in action' Burhan is a legend, like no one before him. His instant mass appeal cuts across ideological, political lines and, at the moment, virtually dwarfs the image of even the tallest of local heroes in the arena.

In death Burhan is now a phenomenon to reckon with.

And it is a million dollar question to predict how and to what extent and exactly in which shape this phenomenon is going to act upon in the coming months and years.

For one, it has the potential to infuse new life into fading insurgency, considering the motivational appeal of his persona.

Two, there is a strong probability that the so-called grey area that was slowly but certainly growing between the two extremes of complicated Kashmir politics might either shrink beyond recognition or evaporate in the heat of the changing landscape.

It is this latter prospect that ought to cause concern within not only the mainstream in J&K, but equally, if not more, over there in New Delhi.

Retrieving the middle space and re-raising the political superstructure of some credibility has been the main achievement in the painful post-1990 period. Its possible loss, or even a setback, can unravel many more things in the troubled border state.

And it is here that New Delhi (the UPA as well as the NDA) must take the blame. All important political engagement with the estranged/alienated segments of Kashmiri population seemingly never occurred to anyone occupying Raisina Hill.

Except for some initial half-hearted moves, UPA1 went to sleep on honouring its own commitments and UPA2 never showed any appetite for revisiting the case.

The NDA under Narendra Modi made history by carving a path where there was none to share power in J&K, with the PDP. The BJP's built-in bias against anything even smelling of 'concession' to (Muslim) Kashmir precludes it from following up the logic of its power sharing arrangement.

Any engagement with the alienated population of the state now virtually dominated by the youth of the Burhan-generation continues to be anathema to the ruling partner of the PDP whose own lifeline hangs by a slender thread.

The resultant vacuum on the ground made the situation ideal for penetration by the Burhan phenomenon. Two generations of youth lured by the romantic appeal of a defiant homegrown hero's larger-than-life image found an anchor to engage.

The situation was virtually gifted to Burhan and if for some reason he were not to be around to step into the frame the compulsion of circumstances would necessarily have found a 'Burhan'.

Almost everything on the ground has been thrown into disarray. Politics has come to a grinding halt with the alarmingly high casualty toll in the aftermath of Burhan's killing.

The credibility of the Establishment is mud. The entire political class stands isolated and rendered clueless but for self-serving taunts traded across the board.

History is a witness that the nation is made to pay a heavy price by ruling Kashmir in isolation of its population.

The political configuration on the ground has gone haywire with this just one incident. Overlooking the high cost of disengagement in Kashmir would be a unforgivable folly; if it is not yet unaffordable.