'Were they two yaars of yesteryears brought together again by fate?'
'Were they two crafty spies hoodwinking each other?' wonders B S Prakash.
Illustration: Uttam Ghosh/Rediff.com 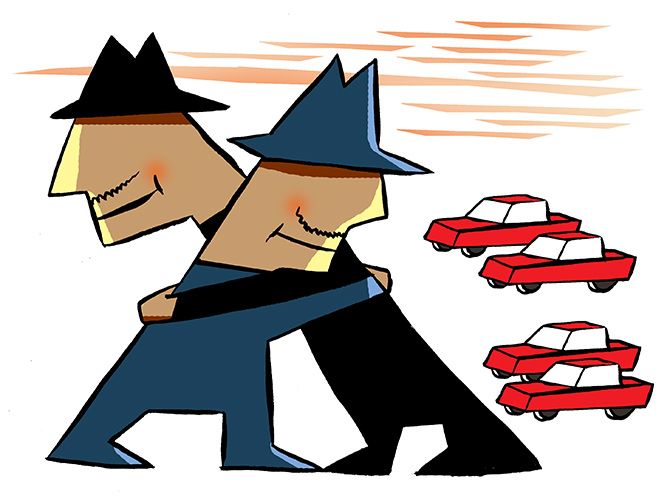 The de facto ruler in that country, whom the world is coming to know simply as Crown Prince MBS has coerced -- a style that he is developing -- the hapless Pakistanis into sending some of their top brass to advise him.

But I had seen Pak generals in Jeddah, I remind myself. Had even got to know one a bit, a military adviser to a prince, no less.

I recall the circumstances that had caused me much anxiety and trepidation at the time.

Retirement has now made me fearless and reveal, after all these years, the strange case of the spy who came in from Lahore.

I am talking of the eighties. I had arrived in our embassy in Jeddah (the then diplomatic capital of Saudi Arabia) as a first secretary.

I was a somewhat sulking presence in the embassy -- Jeddah is not the most attractive of postings for a young officer -- as I began to settle down and get to know other colleagues.

Soon I met a kindred soul in the embassy, much older, but also disgruntled.

One look at him and I knew where he had come from and what he represented. His crisp suit and Old Spice after-shave, greying but trim mustache and twinkling eyes, -- in the overall ambience of sherwanis, adabs, attars -- his brisk and energetic visage proclaimed 'Indian Army', much before he had introduced himself "as Colonel Chopra, but call me Tiger".

Since we did not have a military attaché in the embassy at that time, everyone around, and not just in the embassy, knew that he came from the 'other side' as it was euphemistically termed.

The word 'RAW' was not bandied about so openly those days and officers of that outfit did not write memoirs, as they do now.

One evening, as we sipped our whiskies at his home (which beverage both of us had acquired -- we were diplomats, after all), Chopra told me how he had landed up in Jeddah.

He had hung up his boots and one morning was at the links at the Delhi Golf Club, and who does he see, but his old boss Brigadier Kaul, who was rumoured to be running some intelligence outfit.

Back at the club house, Brigadier sahib asked whether Tiger was interested in playing one last round for the country.

This talk eventually led to Chopra being inducted and subsequently sent to Saudi Arabia, then being newly identified as a 'target' country. And that was that.

"I was hoping for Canberra; this place does not even have a golf course," Chopra sighed as we sipped our drinks

Our friendship grew, despite our differences in age, seniority, and temperament. I was doing economic work in the embassy and occasionally briefed him on what I had absorbed about Saudi oil production, reserves, prices and that kind of thing.

We drowned in these details every day, but somehow, my summaries may have been useful to him in his reporting to his bosses.

In turn, he also used to tell me about what he had heard about the ups and downs in the royal household, the rumours that were always circulating about the 'impending coup' and such like.

Once in a while our conversation turned to the Pakistani designs in Saudi Arabia, and I had noticed that somehow, Chopra used to become guarded. He seemed reluctant to partake in Pak- related rumours or jokes that the rest of us indulged in.

I had started noticing brief encounters between my friend and a strapping, broad shouldered, stranger.

Once there was a big commotion with the latest Sony TV selling at a discount in the souk. In no time, the place was buzzing with Indians, Pakistanis, Bangladeshis etc.

As we also rushed around in the shop, I had seen a brief exchange between the burly man who had come in a Saudi military SUV and Tiger.

On another occasion at the plush Jeddah medical centre, the two came face to face and Chopra had no option but to introduce me to General Khan.

At this point in my narrative, I must mention that I had always been fascinated by the spy world. Not as much by the real spy world -- and I did know some because of my own profession -- but the fictional world created by John Le Carre.

I was an avid fan of all his novels which are not so much about heroism and action, as about deception and human motivation.

With this mindset, I was becoming a little nervous about such seemingly casual brushes between the two.

"Who is he and how come you know him?" I had to ask after a third incident. "I will tell you, but keep it under cover," my friend had replied.

And then one day, on my insistence he had told me the story, albeit, reluctantly.

It appears that when Chopra had first gone to the Toyota showroom to see the models preparatory to buying his car, he had seen a figure from the past appear before him after more than thirty years.

Chopra had sprung up and hugged Imran instinctively. The two were from the same sector in Lahore and had played cricket in high school.

After that Partition had sundered them and all that yarn. Now they were contemplating Toyotas in Jeddah. After the initial jhappi the two old schoolmates had taken a second look at each other.

General Khan was resplendent in his uniform, but was a bit cagey as to what he was doing in Saudi Arabia.

'I am a consultant,' he had said, and it had not taken Tiger long to find out that he was no ordinary consultant but was an adviser in the defence ministry.

Tiger was very guarded and merely admitted that he was looking after education in the Indian mission. Khan guffawed, but worked out the rest himself.

"Thereafter, we have become social acquaintances," Chopra told me.

It was soon thereafter that I happened to see General Khan's glamorous daughter pass a small package wrapped in an old Urdu newspaper to Mrs Chopra at a social reception.

Le Carre began to haunt me. What was the nature of this friendship and to what extent did it go?

In one of my favorites novels A Perfect Spy, the British agent Pym has a friend from the past before the advent of the Iron Curtain. The erstwhile university mate is now in the rival Czech secret service.

The two come together in third countries secretly and feed information to each other on their respective establishments. Their 'professional success' through such mutual but covert cooperation leads to their career advancement till both eventually reach Washington.

I am doing a crude and unforgivable summary of a complex and sophisticated plot, but the point is, I began to wonder whether something like that was afoot between the two.

My fevered imagination saw all kinds of dangers afoot.

What was my own culpability having seen and even met 'the enemy'?

Should I betray my friend?

Inform the benign and elderly ambassador about my suspicions?

One day as we were having tea in Chopra's home, I saw the package wrapped in the Urdu newspaper shoved in his desk drawer.

I decided that I could not be a mere onlooker. Using some subterfuge which I am too ashamed to narrate, I managed to access the package when Tiger stepped out.

Was I about to discover cypher codes or top secret documents?

I uncovered two video tapes. The titles were handwritten in Urdu.

Were they two yaars of yesteryears brought together again by fate?

Were they two crafty spies hoodwinking each other? I don't know to this day.

B S Prakash is a former Ambassador and a long-standing Rediff columnist.
You can read his columns here.