'The greatest loss from replacing the 126 Rafale proposal with the 2016 contract for 36 Rafales might not be the extra money paid, but the opportunity that India's aerospace industry lost of obtaining access to critical aviation technologies and manufacturing skills,' Ajai Shukla points out in the second of a three-part series. 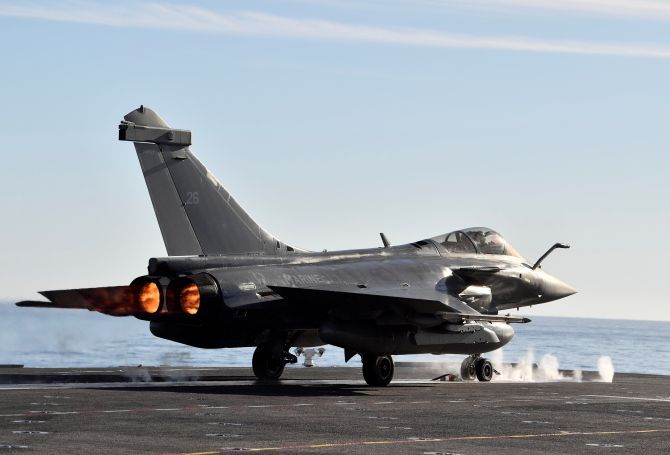 In buying 36 Rafale fighters from the French vendor Dassault in September 2016, senior defence ministry sources indicate the Indian government is paying 40 per cent higher than the price quoted in 2012 for 126 Rafales. That deal was eventually aborted.

Before that deal could be finalised, the National Democratic Alliance government purchased 36 Rafale fighters for €7.85 billion in September 2016. In other words, €217 million per aircraft -- 40 per cent higher than the earlier quote.

Defending the 2016 contract against charges of overpaying, the government argued the new price included -- over the basic aircraft cost of €3.3 billion -- four additional elements not included in the Medium Multi-Role Combat Aircraft tender.

These are 'India-specific enhancements' to the Rafale avionics to boost its combat capability (€1.7 billion), a weapons package (€700 million), additional spares (€1.8 billion) and logistical guarantees (€350 million).

Contrary to the government's argument, a detailed review of the request for proposal (RFP) for the MMRCA, issued on August 28, 2007, shows that the 211-page document stipulates the supply of weapons, along with the first 18 aircraft.

'It is essential that the direct flyaway aircraft be delivered with a full complement of weapons and the weapons package should be integral to the flyaway aircraft,' says the RFP.

Part 1 of the RFP specifies the missiles and bombs to be supplied, such as 336 Active Beyond Visual Range (BVR) missiles, 168 All Aspect Missiles, etc. A separate section (Annexure IV to Appendix A) specifies the capabilities that the weapons must have.

The BVR missiles are required to have a range 'greater than 60 km against targets flying at high altitude'. This range would point to a lesser missile than the 100 km-plus-range Meteor that MBDA is supplying with the 36 Rafales.

In the air-to-ground weapons category, the 2007 RFP specifies a 'combination of stand-off weapons with ranges of 100-200 km [and] a war head of more than 250 kg'. This may or may not cover the SCALP (Système de Croisière Autonome à Longue Portée) missile that is being supplied with the Rafale.

While the 2016 contract may have incorporated a superior BVR missile like the Meteor, the 2007 RFP also clearly had a weapons component, which was factored into the €19.5 billion price.

The 2007 RFP contains all of these elements.

Indian Air Force sources explain there were Indian specific enhancements in both the Rafale configurations. The 2016 avionics might have had marginally improved capabilities, but with no significant effect on price.

Spares and maintenance were an integral part of the 2007 RFP and were included in the €19.5 billion tag.

'The IAF would like to avoid dependence on the manufacturer in terms of factory repair. Thus all repairs are to be carried out by this [Depot Level Maintenance Facility set up in India},' says the RFP.

'MRLS to sustain the equipment for a period of five years will need to be provided.'

This maintenance back-up is priced into Dassault's quote, in the same manner as in the 36-Rafale contract.

The 2007 RFP also requires vendors to ensure a 75 per cent aircraft readiness across the fleet -- a requirement that the government claims to have paid an extra €350 million in the 2016 contract for 36 Rafales.

The greatest loss from replacing the 126-Rafale proposal with the 2016 contract for 36 Rafales might not be the extra money paid, but the opportunity that India's aerospace industry lost of obtaining access to critical aviation technologies and manufacturing skills.

The Request for Proposals (RFP, or tender) that the IAF floated in 2007 for 126 MMRCA, had detailed conditions that bound all competing vendors to transfer key aerospace technologies that would have proven invaluable to Indian scientists and technologies working on two futuristic fighter aircraft -- the Advanced Medium Combat Aircraft (AMCA) and the Tejas Mark II.

However, the €7.85 billion purchase of 36 Rafales that Prime Minister Narendra Damodardas Modi unexpectedly announced on April 10, 2015 in Paris made no provision for any design or manufacturing technology transfer.

All that the IAF will get is fully built aircraft and the skills and technology to maintain them.

The 2007 RFP imposed stringent conditions for transfer of technology (ToT) -- essential when 108 of the 126 aircraft bought are to be manufactured in India.

The MMRCA procurement was based on guidelines issued by then defence minister A K Antony, who told the Defence Acquisition Council that the contract must give 'Indian defence industries an opportunity to grow to global scales'.

The RFP is forthright in demanding ToT, with Annexure I to Appendix M stipulating 'key technologies' for transfer.

'Technologies used shall be current, state of art as used in the contemporary systems... The ToT shall be comprehensive, covering all aspects of design, manufacturing know-how and detailed technical information... Design data shall include the details that are needed to analyse, carry out trouble shooting' of systems, stipulates Appendix M of the RFP.

'The Bidder should confirm in the proposal that all necessary Government approvals for ToT required for manufacture, repair/overhaul, upgrade and all the conditions indicated [above] are in place for the aircraft, engines and all its systems and components and that there would be no denial/delays in future for the ToT,' it says.

The RFP makes exceptions for highly sensitive and high-value technologies that the vendor might not be willing to share. Categorising these as 'proprietary technologies', it states: 'The list of such items shall be far and few and generally restricted to components/processes specifically designed by the OEM for the licensed product.'

If the government had signed the 126 MMRCA contract with Dassault on April 10, 2015 instead of announcing the 36 Rafale buy, the first squadron of 18 flyaway Rafales would be currently in delivery and completed by April 2019.

According to the delivery schedule specified in the RFP, the first six Rafales would have been manufactured in India by April 2020, and all 126 fighters (six squadrons) would be in service by 2026.

Now, however, the IAF will get just two squadrons of Rafales by late 2022. Another tender has been floated for 110 fighters, which seven global vendors have responded to.

However, this could take years to even result in a contract.