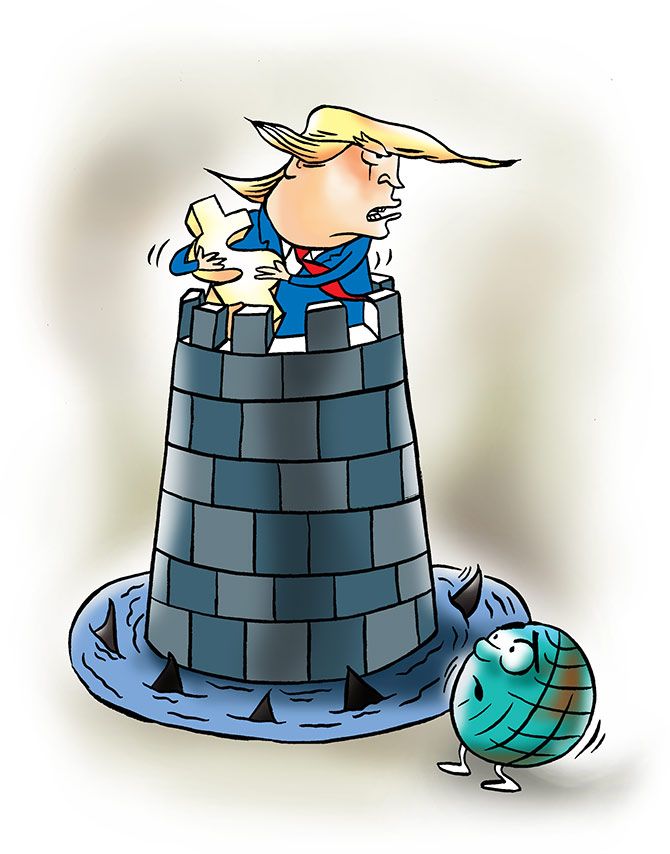 The convergence of capabilities between business and political governance will be more rigorously tested in the next four years than at any time in the post-World War II world as Donald Trump gets down to business (no pun intended) at the Oval Office.

Like Mr Trump, the power rush of politics tempts many businessmen.

They see illusory synergies between the corner room and political office, and are sincerely eager to leverage their skills in service of their countries.

The line-up of former CEOs who queued up as hopefuls in past US Presidential elections -- from Ross Perot and Mitt Romney to Meg Whitman and Carly Fiorina -- is testimony to that.

In India, it is the Rajya Sabha that holds the attraction but more as a means of leveraging power structures than in performing public service.

Mr Trump's bid appears to fall somewhere in between these two impulses.

He is the second businessman with an extant empire to occupy the post-War White House.

Jimmy Carter was the first, having, like the 45th US president, largely financed his rise to politics through a successful enterprise, peanut farming in this case.

Mr Carter, more politician than businessman, had a middling record.

But so far, the overlap of business experience and political governance has not had a happy outcome for the US or the world.

George W Bush had been a Texan oil executive of doubtful ability although his rise to the presidency came via governorship of that state.

Remember, though, that his influential vice-president was Dick Cheney, who was CEO of oil services major Haliburton just before his appointment.

Today, the world is reeling from the former oilmen's narrow understanding of geo-politics and their disastrous eagerness to invade Iraq, the world’s fifth largest oil producer.

They loftily called that initiative 'Operation Iraqi Freedom'; leave it to Mr Trump to articulate the real deal.

'I would take the oil,' he said back in September, outlining his fanciful notion of containing Islamic State and Iran.

This was not stealing, he explained in all seriousness, but reimbursement for the war.

It was another former CEO, Robert McNamara, who was cheerleader for the first catastrophic overseas adventure, Vietnam.

McNamara, one of Ford Motor's turnaround 'whiz kids', was credited with introducing the concept of systems analysis into political decision-making when he served the Kennedy and Johnson administrations as defence secretary.

Streamlined policymaking (in those days fashionably linked to game theory) is certainly desirable in any institutional process.

But all too often, this technique can yield illusory certainties retrofitted to political compulsions as it did in Vietnam -- despite the CIA's early warning that this was an unwinnable war.

(To be fair, McNamara later became a vehement advocate for withdrawal from Vietnam. In 1995, he wrote a harshly criticised mea culpa essentially blaming the generals for misleading him.)

In Mr Trump's case, misgivings over the opaque arm's-length configuration between business empire and the presidency is one dimension of the issue (no less than his refusal to reveal his tax returns).

It is easy to predict this will remain a sticking point.

Though the US President is exempt from conflict-of-interest laws under the US constitution, a lawsuit filed by ethics lawyers suggests that he is already in violation of the emoluments clause because of his refusal to divest from his businesses.

Even honest Jimmy, who built a business without a hint of fraud and had handed off his farm to his mother and brother via a blind trust when he was elected to office, had had to suffer the ignominy of a Republican-instigated investigation into his former business interests during his presidency.

Mr Carter was accused of using the farm as the conduit for a slush fund.

Investigations revealed that the explanation for large withdrawals was embezzlement by his erratic alcoholic brother.

There is little to indicate that Mr Trump's cabinet with its preponderance of businessmen -- including a former oil Big Chief Rex Tillerson, best pals with the liberal world's Great Satan, Vladimir Putin –- will set new standards of integrity.

More so, since his unlisted empire does not even have the virtue of market transparency.

Mr Bush, who also spoke of jobs-led protectionism during his campaign, tempered his rhetoric after he came to power.

Once he was made to understand the US competitive advantage derived from outsourcing, he refocused his attention on tax breaks to the rich and pushing for a nuclear deal with India to open this fast-growing market for America's engineering and arms conglomerates.

If the deceptive job-saving agreements with Carrier and Ford before his inaugural are any indication, Mr Trump has little grasp of the realities of big business beyond the limited ambit of high-end realty and event management.

He tends to view the intricate challenges of the American presidency through the prism of deal-making -- he has repeatedly spoken about 'making deals' with Vladimir Putin, Xi Jinping and others.

Winning in business, as Mr Trump sees it in his book The Art of the Deal, means others losing.

The post-Brexit crash of the pound-sterling was, to him, only a good thing because it would bring more business to his Scottish golf course.

Many intelligent businessmen understand the risks in the game and opt for the industry-CSR complex or consultancy and lobbying when they feel their utility in mainstream business has been maxed out.

Too bad Mr Trump, 70, has neither the disposition nor the nous for these alternative professions.