The PM owes the country an explanation

Manmohan Singh must act now or be resigned his well wishers, the opposition and his own party branding him a 'good man' but equally 'ineffective' during his tenure as prime minister, says Pramod Kumar Buravalli.

A political party with a 125 year old history and having ruled India for over 50 years should know better, much better than just pointing fingers back at the opposition or the media or external conditions for its all round failures!

Manmohan Singh must act now or forever be resigned to a life of painful retirement in which well wishers, the opposition and his own party will permanently end up branding him a 'good man' but equally 'ineffective' during his tenure as prime minister.

He owes the country a thorough explanation on perceived inaction by him while the 2G spectrum was being allocated in 2007 at 2001 rates. Was this a brazen act of 'seeing evil' but 'not being able to do anything about it'?

The prime minister's inability to address issues such as price rise in essential commodities, the ongoing demand/need for smaller states (Telangana, Vidarbha) and continued Maoist infestation goes to show the lack of bold decision making ability at the apex level.

And to top it all, the problem of high level corruption as revealed by the media via the bevy of spectacular scams (of the scale and magnitude never heard or seen before in the history of democracy) and one that threatens to stall the functioning of the Parliament for the foreseeable future.

Not just domestic policies but also on the foreign policy matters, Dr Singh needs to know that his bizarre and unwarranted statements like the ones at Sharm Al Sheikh and on the issue of granting autonomy to Kashmir are being noted by international policy experts around the world with absolute astonishment and bewilderment!

After the 9/11 attacks on Mumbai, Islamic separatist movements have lost whatever global leverage they used to claim. No country in the western world or the moderate Islamic world is going to support Islamic inspired secessionist movements anywhere in the world. And, Kashmir's so called cause for freedom or autonomy is now well highlighted in the international community as an attempt by elements within the Pakistani military to keep their own country intact by waging jihad against India.

In such global circumstances which have invariably vindicated India's long standing foreign policy vis-à-vis Islamic terrorism, Dr Singh should have taken the initiative and once for all addressed the issue of state sponsored or state complicit terrorism directly with Pakistan utilising global fora.

Instead, Dr Singh's foreign policy stand seems 'concessionary' and at best can be described as 'status quotist' in nature.

The Congress has produced great leaders and thinkers such as Lokmanya Tilak, Mahatma Gandhi, Sardar Patel, Rajaji and many more like them whose only zeal was to overthrow the British rule. But that was almost half a century ago!

The current set of leaders (with very few exceptions) cannot claim to represent even 1 percent of that illustrious legacy.

Today, it is very sad to see raids (belated) by CBI on select low level leaders as an example of a clamp down on corruption. The problem is so widespread that such silly raids are only going to add fuel to the opposition's claims that the CBI acts only when all the evidence is safely stashed away by the accused.

And, the Congress party's only other predictable action or reaction to corruption seems to be curiously going on the offensive on Hindutva or Hindu extremism. They seem to conveniently forget that if it were not for the 82 percent Hindus in India, the Congress party would never come to power and that too using the misused phraseology called 'secularism'.

India can no longer be convinced.

It cannot be told the same things about being above and beyond corruption, about their illustrious role in the country's freedom struggle and their so called secular credentials over and over again.

Goebbels is not a propagandist worth emulating especially in this day and age where information is not anyone's property! 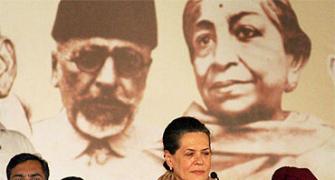 The Congress may be combative, but can it win?
B Raman: Need to restore public confidence in CBI

The dark cabals that rule Delhi