News
Business
Movies
Sports
Cricket
Get Ahead
Money Tips
Shopping
Sign in  |  Create a Rediffmail account
Rediff.com  » News » The only voices of 'India' Kashmir hears are on TV

The only voices of 'India' Kashmir hears are on TV

'The bloodthirsty rhetoric of chicken-hawk TV anchors are the worst contributors to Kashmiri alienation.'
'If this implacable hatred is the authentic voice of India, Kashmiris argue, who can hope for peace?' asks Mihir S Sharma. 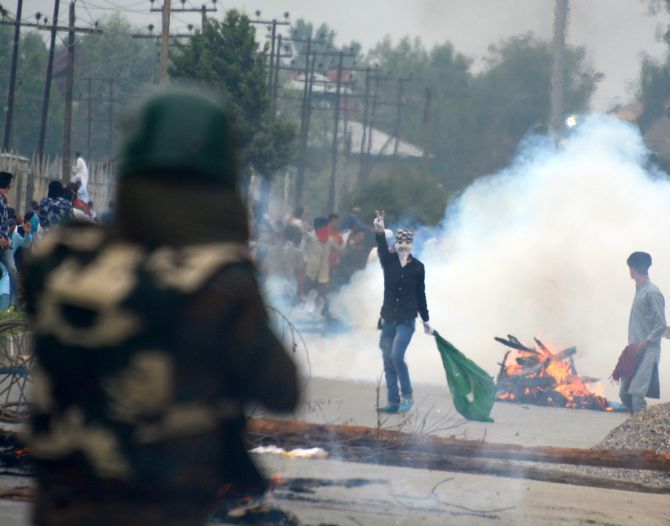 Troubles in the Kashmir valley have taken a new and distressing turn -- witness the shocking murder by a mob of a member of the Jammu and Kashmir police on duty in downtown Srinagar.

Deputy Superintendent of Police Mohammed Ayub Pandith was beaten to death by a mob of 200 to 300 right outside Srinagar's Jamia Masjid; no more explicit indication of anarchy and alienation exists than the open murder of a policeman.

It is important to stress that this murder differs from other killings of officials of the state in Kashmir.

First, this was not an attack by militants against a planned target.

Second, this was a senior officer in the state police force.

The Jammu and Kashmir police occupy a specific niche in the valley. Naturally, they are supposed to be guardians of the Indian Constitution, just like any other police force.

But they have also been, historically, a crucial halfway house between ordinary Kashmiris and the paramilitaries and army that are seen as instruments of 'Delhi'.

Being raised from among Kashmiris, and living among them, as well as carrying out the ordinary day-to-day policing activity essential to society, they were not usually the primary targets of anti-Delhi anger or violence.

In the past years, this has changed.

Police families have been ostracised and individuals attacked -- culminating in this horrific murder.

This indicates the changing character of the violence in the valley.

Since the killing of Burhan Wani and the ill-advised coalition between the Peoples Democratic Party and the Bharatiya Janata Party, resistance in Kashmir has increasingly become to appear like a popular revolt and less like a stage-managed guerrilla war.

The crowds of civilians that emerge to stand between paramilitary squads and holed-up militants would have been an unusual event in earlier times.

What has happened to bring us to this pass?

The answer to this question is complicated.

Yet one thing is certain: The current upsurge is a product of a far more widespread anger at Delhi and disillusionment with local leadership than was earlier the case.

Older Kashmiris have complained that they are no longer able to 'control' the young and the angry.

I have been told that senior security officials have even said, in despair, that it is difficult to fight "an entire people".

If so, this is a shocking admission of failure.

The Indian State has been unable to demonstrate to a generation of young Kashmiris that there is hope in something other than active resistance.

Seeing themselves as having been denied their rights as Indians, they are now seeking them as Kashmiris.

We will need a different approach to the Kashmir problem if we are to emerge from this impasse.

What is aggravating the problem?

Well, first, the fact is that the state government has lost all credibility.

It lost much of it through the very composition of the coalition: The PDP ran a campaign to keep out the BJP, the BJP ran to keep out the PDP, and when the two joined hands afterwards it seemed to legitimise the primary accusation against 'pro-India' politicians in the valley -- namely, that they have no principles whatsoever.

But the state government's behaviour since then has made matters worse; the chief minister seems to have gone almost completely silent.

The central government has been as silent.

No calming words have emerged from the central leadership, not a single phrase that Kashmiris could view as conciliatory.

Even elements within the army have abandoned that institution's long-cherished principles, particularly in its response to the widely-shared video of military men using a human shield.

Compare this to Atal Bihari Vajpayee, who famously said that a common humanity was the base upon which the Kashmir dispute would be settled.

Today's BJP views Kashmir only as a way to win votes in Uttar Pradesh and a stop on the way to Amarnath.

And, if you listen to increasingly loud whispers from its foot soldiers, eventually as a location for settlements of 'real' Indians.

Given the central government's cynical silence, the voices of 'India' that Kashmir hears are on TV.

The bloodthirsty, dehumanising, rhetoric of chicken-hawk TV anchors and the ex-soldiers they con into appearing on their shows are among the worst contributors to Kashmiri alienation.

If this implacable hatred is the authentic voice of India, Kashmiris argue, who can hope for peace?