The Pampore attack 'has the stamp of LeT written all over it.'
'They are exactly like the so-called fidayeen of the 1999-2003 phase, when J&K witnessed a surge in suicide attacks on various important garrisons,' says Lieutenant General Syed Ata Hasnain (retd), who served as the General Officer Commanding 15 Corps in Kashmir. 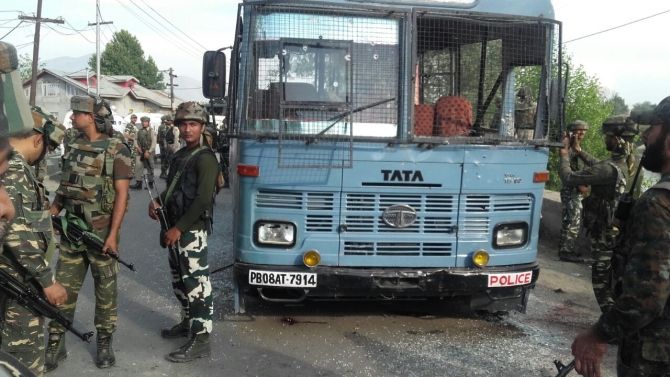 Experienced practitioners of counter insurgency and counter terror operations (CI/CT) usually have a tendency to take setbacks in the stride. A sort of one bad day after ten good ones.

However, the public does not see it that way and it is public opinion that matters. The public pressures the political leadership which in turn places pressure on the security forces. If nothing else it ensures introspection.

Some years ago when the CRPF lost 75 men in Dantewada in a Naxalite ambush in which nothing went right for the policemen, it became a landmark event for analysis and corrective action. While everything may not be copybook in the Red Corridor, but definitely the tactical concepts, conduct of operations, leadership and command and control have all seen an upward spiral in quality.

The same now needs to be done in Jammu and Kashmir where the CRPF has suffered its first major setback and that too in a semi operational mode. However, to do that without a realistic perspective of the situation would be an exercise in futility.

On this website itself Archana Masih interviewed me a little more than a year ago. I spoke of the Last Mile, a phenomenon which invariably takes place when the nature of insurgency changes.

I quote from an earlier article of mine when Pampore was in the news during the Entrepreneurship Development Institute (EDI) building stand off -- 'the lesser the terrorist presence and more that the Army tries, the results will never be commensurate with statistics of the past. Take it from me; there will be casualties on the Army side higher in ratio than at the time when there were a larger number of terrorists.'

Granted that the casualties this time in the Pampore ambush on the CRPF bus were that of the CRPF, but how does that make a difference? It was Indian blood which has been spilt, blood of policemen who were not even involved in operations at that time. It is heart wrenching for us all.

How does one view this? The first observation which comes to mind is that the terrorists are well trained, prepared to die while undertaking strikes and willing to take chances while operating in small teams.

It has the stamp of LeT written all over it. They are exactly like the so-called fidayeen of the 1999-2003 phase, when J&K witnessed a surge in suicide attacks on various important garrisons and buildings including the Tourist Reception Centre and the J&K assembly.

The second is that the planners and the directors sitting across the LoC are being reported the situation meticulously and based on that they are making tactical changes.

Obviously they have hit the core of the weaknesses of the overall CI/CT grid in the Kashmir Valley; that is the issue of road security.

The National Highway is slowly becoming the deathtrap of the Valley. This needs a little more analysis.

Even in the heyday of militancy in the late nineties and the early millennium the National Highway between Srinagar and the Jawahar Tunnel saw some successful IED attacks.

Troops and officer buses, which bear maximum potential for high casualties, were the objectives. Ambush was a less common mode of strike although only in 2007 many attempts were made. The IED capability of the terror groups also dried up after 2008.

In June 2013 a major strike on a small convoy of 35 Rashtriya Rifles near the airport crossing sent shock waves as eight soldiers were killed with impunity. Grenade throwing in built up areas, especially in Bijbehara, was a common phenomenon for long, partially countered with more proactive domination of the town.

Yet, ambush was only a one off type of strike which terrorists adopted. In 2016 it appears that planners from across the LoC have directed focus on the National Highway.

In February 2016, a similar ambush on the CRPF convoy led to the standoff at the EDI building and this month we have had the BSF convoy also being ambushed at Bijbehara.

The question arises: Are the security rorces so vulnerable that they cannot effectively secure themselves from these hit and run methods adopted by the terror groups?

The answer is a blanket NO. However, the unpredictability factor in CI/CT operations always militates against them. It is not as if only the National Highway alone is vulnerable. No one speaks of the acute vulnerability of helicopters and even fixed wing aircraft which take off and land at the Srinagar airport.

Each time any aircraft is at a lower height a determined terrorist can fire small arms at it and cause huge damage. Helicopters land at all kinds of helipads to pick up casualties or drop commanders. It isn't difficult to take them on and there is no need for missiles; AK 47s or even RPGs used for rocket attacks are sufficient, notwithstanding helipad securing drills.

However, it hasn't happened yet and mercifully so. Road Opening Procedure (ROP), the well-known and practiced drill for securing a road is executed every day for securing the National Highway. Some other arterial roads are similarly secured for move of logistics and troops.

But every single road cannot be secured. Operational tracks near the LoC are as vulnerable and the Army takes its chances with these. If the actual recommended drill for ROP is followed it will be extremely expensive in manpower.

What does the real procedure actually involve? It means virtually 24x7 domination of the corridor which is supposed to be three km either side of the road.

Domination largely means patrolling, showing physical presence and emplacing some troops in hides so that any terrorist movement through the area is intercepted.

The corridor domination is joint responsibility of the Army and CRPF, but there is no clear cut division of responsibility. The road per se is checked every morning with assistance of technical explosive detecting equipment and dogs. No chances can be taken on this.

Subsequently, troops occupy static positions on the road; they actually need to be away from the road and dominate the stretch by observation. Convoys are then given the green signal for the morning move. Through the day different routine structured convoys from Srinagar to Udhampur or vice versa and many other unstructured ones roll past the ROP parties.

In the late afternoon the 'up' convoys reach from Udhampur. The built up areas such as Pampore, Bijbehara and many others which are especially vulnerable are required to be strengthened at such times through mobile patrolling and perhaps infusion of additional strength.

I remember that in 1999 I once rang up the Commander of 1 Sector RR at Anantnag at 4 PM. I was told by the duty officer that the commander and all his staff were out on the road to reinforce the ROP as the convoy was expected from Udhampur.

I have not forgotten that and always recount it to bring home lessons to people. Whatever strength can be mustered must reinforce the ROP when the huge lumbering convoys go past townships. These are not drills, but improvisations that formations and units follow based on experience and it is this experience in CI/CT operations that saves lives and achieves results.

Pampore needs reinforcement, as much does Avantipur and Bijbehara.

The need for hardening of buses and more bullet proof jackets

It is easy to blame a force for a failure, but it needs to be remembered that there are many facets that do not have copybook execution of procedures. However, I do agree that after the recent spurt of attacks on the National Highway there should have been more brainstorming to ascertain ways of defeating the terrorists.

The density of ROP was increased in recent weeks as per the DG CRPF himself. Yet what is important is that ROP is extremely stressful and for policemen to have focus all day does become a challenge. They need constant leadership and direction along with motivation. The required degree of rest is never achieved thus making ROP less effective than desired.

Another facet which has come under glare is the lack of bullet proof jackets and hardened buses for move of troops. Two pieces of recall may illustrate previous levels of concern.

In 2003 the then GOC of Dagger Div undertook on his own the procedure of hardening buses of his division. He scouted and found Vijayanta tanks lying in a derelict state at Delhi's Central Vehicle Depot. The skirt plates were removed, transported and welded on the sides of the buses.

In 2004 a suicide car bomber detonated his car after dashing against one of these buses. The bus driver was killed, but all others in the bus were saved. The bus also had a layer of melted industrial rubber to reinforce the floor. This was a result of the concern that the GOC had for his men and he went the furthest extent to take measures to protect them.

We need replication of that spirit. That led to the hardening of all buses of the Army by the Base Workshop at Udhampur. Progressively those buses may have wasted. I am not sure if Army buses are hardened any longer.

However, it is for public information that with the quantum of men under arms in the Valley there is a constant need for buses for transportation. To supplement the numbers, buses are also hired from the local State Transport Corporation which obviously cannot be hardened.

To reduce casualties in the event of an IED or an ambush the number of troops in a bus or a troops carrying vehicle was reduced to a lower figure. These drills continued for long and may have diluted over time. They need restoration in letter and spirit and application to all forces.

It is after long that road security is being discussed all over; about time. It is the least glamorous of tasks in CI/CT operations and usually fails to draw attention. We have had IED incidents on the National Highway galore during the nineties and even later but it is only a terribly negative incident which has focused us all on this all important aspect.

Perhaps review of many other lesser known weaknesses of the grid need to be highlighted routinely and discussed professionally by the practitioners.

As a last word I may add that whatever investigation and analysis is done of such an incident it should only be done by those who have been practitioners at the tactical and sub tactical levels too. Their contribution will always be far more intrusive and based on practical aspects.

Lastly vulnerability of troops in a CI/CT environment is never force specific. Every effort must be made to revisit and revise SOPs which must be shared across the board. Their execution needs to be the subject of Core Group meetings and informal exchanges at different levels. 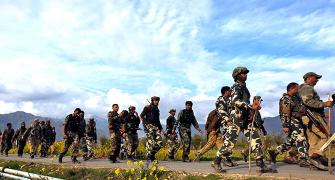 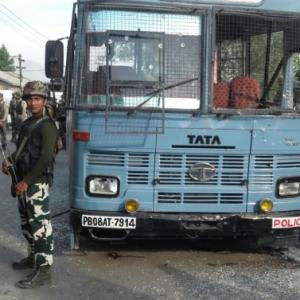 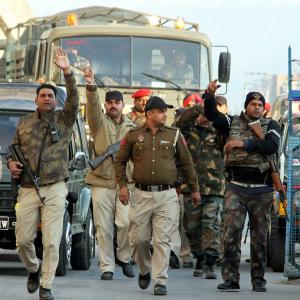