'Modi's power rests on the Hindu vote.'
'It is this vote bank that sees the Supreme Court verdict on Sabarimala as an intrusion into its religious practice and is frothing at the mouth.'
'History shows us the ill-fated consequences of a strong government buckling before street power,' cautions Saisuresh Sivaswamy. 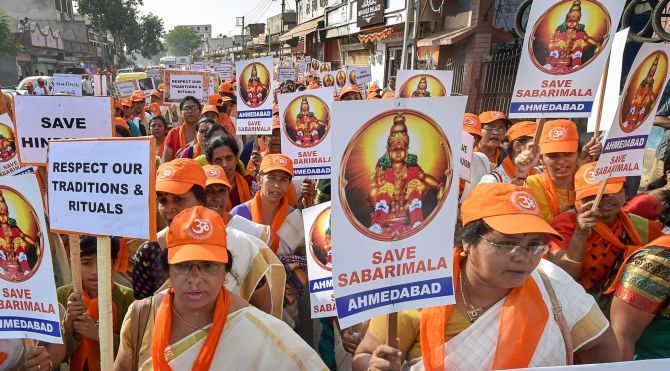 For those of us who have witnessed, and lived through the consequences, of the disastrous enactment of the Muslim Women (Protection of Rights on Divorce) Act 1986, the last few weeks since the Supreme Court's path-breaking verdict on allowing women of all ages into Sabarimala temple, cannot have been pleasant.

It may be a coincidence that the last two full-majority governments in India have been buffeted by a judicial verdict, but the reactions to the latest court ruling mirroring the ones more than three decades ago cannot be a coincidence.

There's a template that has been followed before.

To rewind a bit for those who came in late. The Rajiv Gandhi government of the late 1980s was well ensconced in office, on the back of a brute majority of 400+ in the Lok Sabha, when along came a Supreme Court verdict in the matter of a Muslim woman seeking maintenance from her husband who divorced and abandoned her after paying her the Sharia-mandated maintenance.

The Supreme Court bench found merit in her suit and upheld Shah Bano's claim for maintenance beyond that mandated by the Sharia, and for good measure made some observations on the government's failure to enact a Uniform Civil Code as prescribed in the Directive Principles of the Constitution.

For the Muslim orthodoxy, this was a direct interference in their faith.

And they protested in the only way they could, by coming out on the streets in lakhs.

For a government with a never before or never after seen majority, this should pose no worry. Democracy, after all, incorporates safety valves like the right to protest peacefully.

But despite the fact was that he may have been the prime minister non-pareil, Rajiv Gandhi was only a first-timer in office (and a second-timer in the Lok Sabha), hence easily rattled, and having virtually nil political experience relied on power-brokers and such for advice.

The fact also was that the Congress party's power base rested on three legs: The Muslims, the SC/STs and the forward castes.

Since Independence the Muslims were always in the Congress corner, for among others it promised them a version of secularism that was acceptable to the minorities (like non-interference in religious affairs).

It was this base that was now under threat, after Muslim leader after leader railed and ranted against the Supreme Court verdict.

Since the Muslim community did not have a secular leadership but its own clergy who doubled up as intermediaries and spokespersons, the 'Islam in danger' line was easily sold and bought.

As the Muslim vote seemed primed for revolt Rajiv Gandhi buckled and brought in the Muslim Women (Protection of Rights on Divorce) Act 1986, restoring the status quo ante.

Then came the cruel twist.

The catapulting before Muslim orthodoxy, and the ugly spectacle of using the legislative route to overturn a judicial verdict, did not go well with the Hindu voters of the Congress party. And in order to assuage them the Rajiv Gandhi government pulled a rabbit out of its hat.

An old mosque that lay under lock and in disuse in Ayodhya following years of litigation by some Hindus claiming it as the birthplace of Lord Ram thus saw its doors reopened and Hindus being allowed to worship at the Janmasthan.

And India has never been the same again.

The Bharatiya Janata Party, with a measly two members in the Lok Sabha, saw its moment of glory in Ayodhya and quickly rode the mandir versus masjid train to where today, it is only the second government after Rajiv Gandhi's to secure a majority on its own.

The intervening 30 years have seen the masjid razed by the lumpen, communal riots, Hindu-Muslim relations plummeting, bomb blasts, in short the societal fabric torn asunder like never before since Partition.

Who would have thought of this grim denouement when a destitute woman knocked on the doors of the Supreme Court all those years ago!

Narrating the above is not only to highlight the dangers of overturning a judicial verdict but also to point out that even the strongest government becomes a deer in headlights when its voter base comes out on the streets in anger.

The Supreme Court verdict on Sabarimala brings together this combustive combination -- of court verdict angering the vote bank -- once again, this time with the Hindu community, and is a cause for alarm.

There have been demands by Hindus on the Narendra Modi government to overturn the verdict like it was done 32 years ago for Muslims, and if the government has been non-committal so far it is only because it doesn't have the numbers that Rajiv Gandhi had to bulldoze virtually anything through Parliament.

If the government does decide to yield to pressure and brings in a bill in the winter session of Parliament, it is anyone's guess what the Congress party, given its new-found sense of Hindu-ness, will do.

If push does come to shove, Rahul Gandhi will do well to hark back to what his father did and the disastrous consequences flowing from it, least of which was the decimation of the Congress party itself.

It is illuminating to consider that more Muslim women than Hindu have come out on the streets to protest the criminalisation of instant talaq, but neither was it covered to any great extent in the mainstream media nor was the government unduly worried -- because Muslims were not, are not, and will not be the BJP's votebank.

So it could trot out the line that it was merely respecting the Supreme Court verdict by enacting a law banning the practice.

But the same respect for judicial pronouncements is now under threat.

For Narendra Modi is in office primarily because he has, for the first time, broken the unspoken rule that the Muslim vote was a sine qua non to form a government in New Delhi. His power rests on the Hindu vote.

It is this vote bank that sees the Supreme Court verdict on Sabarimala as an intrusion into its religious practice and is frothing at the mouth.

History shows us the ill-fated consequences of a strong government buckling before street power. Will the Modi government, too, go the same way, to a similar denouement?