The Guru, the Gandhian, the Organisation Man

Rajeev Srinivasan on how Ramdev, Hazare, and Husain are all representative of different strands in Indian society.

Baba Ramdev, Anna Hazare, and M F Husain have dominated India's headlines in the recent past for obvious reasons. It occurred to me that they form three basic archetypes of Indian society -- namely, the Guru, the Gandhian and the Organisation Man. You might even say, extremely roughly, that they mirror various yogas, although the cognoscenti may quibble.

The Guru represents the thread of spirituality that has been a hallmark of Indian civilization for a very long time -- indeed, all the way back to the Indus-Saraswati civilization with its arresting sculpture of the philosopher-king with eyes half-closed in meditation, and the famous seal of the yogic Pasupati in padmasana. It may well be that the ideal of the philosopher-king as personified by Marcus Aurelius had its origins in the pre-2000 BCE Indus-Saraswati.

The Gandhian is a more recent phenomenon if you look at it literally as a follower of Mahatma Gandhi; but if you think about it more generally, there has been a streak of Dharmic righteousness in Indian society for a very long time, at least from the time of the Reformations embodied by Gautama Buddha and Mahavira circa 500 BCE. The spirit of Dharma is expected to manifest itself in the personae of individuals who lead by example.

The Organisation Man is also new/old, and owes much to both MNCs as well as the Soviet system. These structures create highly motivated company men, whose allegiance to the company (or the party) is unquestioned, and who, in return, benefit greatly from the largesse of the grateful company/party. I am reminded of a sentence from M Mukundan's classic On the Banks of the Mahe River: "L'etat se réjouit de ton succes" (the State, ie the French State, is pleased with your success, that of a nationalist Mahe resident).

There have been Organisation Men in India before: the box-wallahs of Calcutta, the Indian Civil Service -- those who served the interests of Empire, and benefited greatly therefrom. There were also many who made fortunes as friends of John Company. But the flowering of the Nehruvian State has seen a manifold increase in the number of those who become, as it were, darlings of the Establishment. And if you step out of line, well, there is always the example of what the Soviets did to Trotsky -- they could make you a non-person. You cease to exist.

Thus you might say Baba Ramdev is the Guru, Anna Hazare is the Gandhian, and M F Husain is the consummate Organisation Man.

Baba Ramdev does identify with the hoary spiritual traditions of India, although he does bring in his own idiosyncrasies. For instance, the traditional Guru has been a mild, philosophical, spiritual person emphasising the syncretic, tolerant strain of meditative Indic tradition. A good example would be the other-worldly and kindly Ramana Maharshi of Tiruvannamalai, or Sri Ramakrishna of Calcutta. Ramdev is not so mellow.

That is not to say that there have not been assertive Gurus. The most prominent, of course, were Swami Vivekananda and Sri Aurobindo, who did much to rekindle the spirit of Indian civilization, under withering attack by malign forces. And let us not forget the youthful Adi Sankara, he who traversed the length and breadth of the subcontinent, defeating the Buddhists in intellectual battles.

Baba Ramdev is perhaps in the mould of these robust Gurus. The fact that he is not an urban, convent-educated, deracinated, "People-Like-Us" person is both a burden and a blessing for him. It is a burden in that the urban middle classes are bemused by him: he is not a PLU and they cannot relate to him. I am indebted to Swapan Dasgupta's piece 'Revolt of the Outlander' (external link) for this insight.

On the other hand, it is a blessing for Baba Ramdev because the rural middle and lower-middle classes can and do relate to him. With his rough rustic looks and demeanour, those in the hinterlands find him to be 'PLU' for them; they understand him, he is one of them.

India's urban middle classes are very clever. They have hijacked the discourse as well as the budgets of the Indian State: for instance, India alone in developing Asia over-invested in tertiary education, producing large numbers of the college-educated (although 'educated' may be too strong a term.) All the other Asians invested in primary education, ensuring that their masses would be literate and good entry-level workers. Why? Because India's urban middle classes wanted the State to subsidise the college degrees of their children, who could then seek comfortable sinecures in the West.

Similarly, the urban middle classes have arranged for poor villagers in the armed forces to be hired to die for them in futile wars, insurrections and insurgencies, while the children of the middle classes enjoy the fruits of globalisation. If there were a compulsory military draft, with their children in danger, Delhi's memsahibs would have solved the Communist terrorist problem and the Pakistan problem years ago. As of now, the sons of some poor Bihari mothers are massacred daily by Maoist terrorists, and said terrorists ("Gandhis with guns") are feted by the Delhi socialites.

The Organisation Man represents the ultimate victory of the urban middle classes. Many with no particular talent other than a fine nose for profit have attached themselves to the generous mammaries of the Welfare State, and have prospered. For instance, there are all these luminaries -- self-proclaimed 'eminent' historians, economists, writers, playwrights, filmmakers, etc., -- who give each other awards, while those with genuine talent are blackballed if they do not toe the company, or party, line.

An illuminating case was that of O V Vijayan, arguably the finest Indian writer of the 20th century -- a fabulist of immense range and power who shines even in comparison to the magical-realist icon Gabriel Garcia Marquez -- who was ignored and blackballed, as he made the cardinal error of apostasy: he relinquished the Marxist beliefs of his youth. And he wrote a rude novel about Jawaharlal and his courtiers. Career-limiting move.

The opposite was true with Husain. He may or may not have been a great artist -- my personal belief is that his talent lay in the high arts of self-promotion and self-aggrandisement, as in the case of a famous playwright and a famous novelist whom I am not allowed to name -- but it became very lucrative for those who owned his paintings to claim he was a Picasso. And so they did. Thus, hey presto, greatness was thrust upon him. I suspect that the biggest collections of Husain works are not with art enthusiasts, but with these entrepreneurs who had the means and the motive to talk up his stuff.

"Talent" in India is often dubious (I am reminded of The Talented Mr Ripley). There was an important officer I heard of, whose young son was reputedly a brilliant artist. Admirers thronged to buy the kid's paintings at amazing prices. Strangely, though, when the officer left office, the queue of admirers vanished rapidly too.

I am also reminded of a religious figure who didn't actually exist, but who was, through the magic of "truth by repeated assertion", turned into an actual fact, and a bountiful source of money for the cognoscenti. There was the cuttingly brilliant story The Beatified Kochappi by Ponkunnam Varki, about a manufactured 'saint'. I believe Husain was, similarly, a manufactured 'genius'.

Not surprisingly, Husain, who was toiling in well-deserved obscurity painting cinema posters for Bollywood, was 'discovered', and his net worth zoomed in tandem with the multi-billion-rupee scams that the whole country got briefly exercised about, before lapsing back into its usual apathy.

In fact, Husain has been elevated to something of a touchstone or a litmus test: you will be given or denied PLU status and an official party membership based on whether or not you believe in Husain's martyrdom, or sainthood, take your pick.

Where does this leave the Gandhian? I am afraid that archetype is on its way to the trashcan of history. In an era when the Organisation Man is supreme, the Gandhian easily gets hijacked. Even though the original Mahatma Gandhi was a marketing genius, today his acolytes are tightly controlled -- see what happened to Jayaprakash Narayan, for instance.

While Gandhians are well-meaning, decent individuals, the Organisation Man commandeers them in ten seconds flat: they pile on to the extent that the Gandhian ceases to have any personality left, and is led by the nose by the Organisation Men. The bewilderment with which Anna Hazare speaks of his campaign now is primarily because, before he knew it, the very targets of his anti-corruption drive, or their friends, have taken over his movement. Co-option has never been smoother. Hazare must be thinking to himself, with apologies to Pogo, "I have seen the Enemy, and he is us!"

Organisation Men, honed by years of fratricidal warfare to get at those mammaries, make mincemeat of the Gandhians. The latter stand no chance. You should see those cringe-inducing photos of 'civil society' members haranguing poor Hazare to understand the extent to which they browbeat the poor old Gandhi-topi-clad ones. The Organisation Man has successfully turned the Gandhian into a marketing appendage!

So, young man, forget being a Guru or a Gandhian, head to the nearest School of Organisation Men, study the usual cant, and you will be well on your way to fame and fortune! (The same applies to young women, too, by the way.) 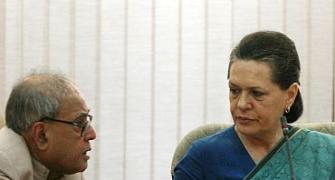 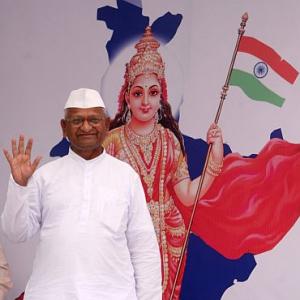 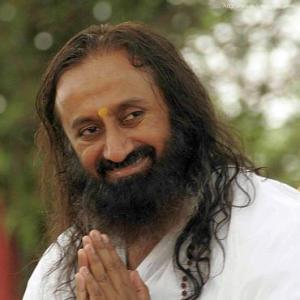